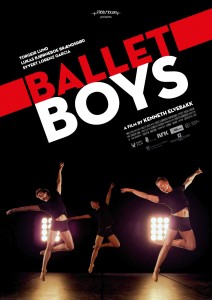 The Ballet Boys (★★½) doesn’t quite hold our attention as strongly as First Position, but it should nevertheless please its target audience.

The film focuses on the high-school experiences of three aspiring dancers training in Norway. Lukas is introduced first. His parents tell us he often doesn’t get home before nine o’clock. One of the other dances admits that Lukas trains “the longest” and “the hardest.” Syvert comes across as more ambivalent. “Maybe I’ll be an engineer,” he says about his fall back plan if ballet doesn’t work out. That career, like ballet, requires a lot of time and focus, and maybe Syvert juts wants to be a kid. Torgeir tells us that everything is possible if you want it enough. Will that optimism fuel him to success, or is he in for a rude awakening?

While all the elements are there for a real crowd pleaser The Ballet Boys never quite manages to decide which story it wants to tell. The competition format, whether it be in a sports film or a documentary, is hard to mess up: introduce the characters early on and the natural drama of competition should carry the day towards a climax where winners are revealed.

Yet here the outcome, at least among boys, is rarely in doubt. The film then changes gears and follows one of the dancers past high-school and into a professional apprenticeship. Does he miss his high school friends? Do they miss him? Well…sure. Many high school kids face a difficult transition once they graduate and purse college or careers. If the film wanted to focus on that part of the story, it might have shown how the ballet boys, while different in their vocation, are representative of young adults across the board. But after having spent the first forty-five minutes telling us how they are and why they are different, the film feels a bit like it doesn’t know how to end.

My other quibble with the film, probably the more serious one, is that there is not as much dancing as you would expect. We get snippets here and there, but more time is spent listening to the boys talk about ballet than watching them dance.

Yet despite some questionable directing choices and editing, the film does give us a glimpse into the dance industry and the costs of pursing one’s dream of becoming a performer. As one sees with the Olympics every few years, the surest way to get American audiences interested in a sport or an art with which they are less familiar is by telling the stories of the participants.

The Ballet Boys is currently available exclusively on Itunes, but it can be bought on DVD from First Run Features starting October 13, 2015.