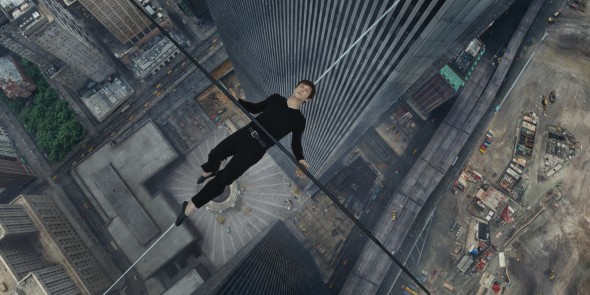 I will confess up front that Robert Zemeckis is not one of my favorite directors.

It is a given that readers may always get more out of a film or enjoy it more than does a critic. If Cast Away, Back to the Future, or Forrest Gump are among your personal favorites, take this review with the standard grain of salt and then give the shaker another shake.

I will confess, too, that the last act of The Walk (★★½), when Philippe Petit finally executes his tight wire stroll between the two towers of the World Trade Center has some swell special effects. Even having seen the documentary Man on Wire and knowing how the story ends, I still felt the vague stirrings of primal fear and fascination at the execution of the showman’s most daring stunt.

But in addition to his director’s duties, Zemeckis shares screenplay credit with Christopher Brown. The resulting script is a mess–at times listless, at times confused about its own themes, always giving too much expository dialogue, almost never conveying the sense of wonder and mystery that it tells you its characters are feeling.

Petit, for those of you haven’t seen the documentary, was the Frenchman who managed to trespass his way to the roof of the not-yet-fully-open World Trade Center towers in the early 1970s and stun the New York citizenry with a free exhibition of tightrope walking.

The execution of the stunt makes for a fitting climax, but the film doesn’t appear to know what to make of the stunt–an introductory speech by Petit claims that he cannot explain why he did it, only show us how–so the film that precedes that climax too often feels like filler. Occasionally the story brushes up against an interesting detail, but whenever I wanted to learn or hear more, it rushed past potential human drama in order to get to…tepid movie cliches.

For example, Petit (Joseph Gordon-Levitt) argues with his mentor, Papa Rudy (Ben Kingsley) about using a safety harness. Papa Rudy says he would not allow his sons to perform such a stunt without one, but Petit counters by asking Papa Rudy if he himself would use it. Rather than introducing a potentially revealing exchange that might give us insight into the performers, Petit’s question slams the door shut on any further discussion.

After a drawn out introduction that tells us Petit’s dream but not much else about him, the film morphs into essentially a heist film…but one indifferent to the mechanics of its own plan. We are told that Philippe spends a long time building a scale model of the top of the towers, but we never see him doing it. His plan to get past security guards appears to be…improvise! Maybe there is some historical accuracy in this part of the plan, and if so, that provides a cruel historical irony given the long shadow of 9/11 that the movie both milks and dodges, but the build up doesn’t add much to the drama. If we’ve seen the documentary (or even the trailer) we know Petit is not going to get caught before he can attempt his “coup,” and there are only so many shots of security guards slowly walking towards a protagonist hidden in the shadows only to be turned away at the point of discovery that one can take in one’s lifetime.

It doesn’t really help The Walk‘s cause, either, that two better films–Mission: Impossible and Ant-Man recently used the breaking and entering structure to greater dramatic effect. Of course in those films, something was riding on the breaking and entering. Here, until Petit actually puts both feet on the wire, it’s hard to see what the negative consequences would be of his stunt getting aborted.

Once he does take that inevitable first step over the void, the film gives us a good quarter hour of magic. Even here though, I have to confess that the script appears to lack a certain confidence in the efficacy of its own images and so gives us surrogate audiences pumping their fists in exhilaration, standing up and applauding, and endlessly verbalizing which emotions we are supposed to feel.

The awkward elephant in the room for much of the film is the dramatic irony produced not by anything in the film but by the audience’s historical knowledge of the eventual fate of the World Trade Center. The specter of 9/11 has haunted many films and been used to produce many emotions, but…nostalgia? The Walk‘s plucky, can-do optimism (the film it most reminded me of was Rudy), its comfort in the knowledge that nothing really bad can happen to us or our screen heroes, grated on me more than a little when it tried to have its cake and eat it too by tapping into some of our deepest fears and picking at some of our most painful scars. Philippe drops his turtleneck, and for just a moment his accomplice on the ground thinks she sees a body falling in a hideous death dive. If you are going to invoke one of the most horrific events that ever played out on live television, it ought to be for something more than a winking “gotcha” moment.

And yet…and yet….I mean look at that picture of Joseph Gordon-Levitt with his back to the abyss and eyes focused heavenward, choosing to orient himself towards that which is beautiful rather than towards the earthly existence to which we are all fleetingly bound.

If only the film knew how to get out of its own way.