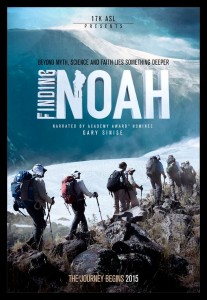 Brent Baum directs the documentary Finding Noah: An Adventure of Faith which narrates the story of a team of archeologists who try to find Noah’s Ark at the top of Mt. Ararat in Turkey. Hearing this description, some might expect to see the film partake in the spiritual journey of the archeologists or some might want to see it for the promising cinematography (and, yes, the visuals of the mountain, sky, and open plains are breathtaking).

But there are some who could see the entire concept of locating Noah’s Ark as borderline godless. Many Christians believe that Noah’s Ark or the Garden of Eden are not meant to be found; neither’s purpose is meant to “prove the Bible correct.” Rather, a monument like the Ark ought to be accepted by faith, and any attempt to discover it could be disrespectful to that faith. This is the exact philosophy that I, as a Christian, was raised under.

For those like myself, who think that searching for the Ark is comparable to disbelief or think that it is impossible to find the Ark, this quest is a “waste of time.” Yet, I tell you that Baum’s film will not be a waste of anyone’s time. Regardless of one’s opinion on Noah’s Ark, viewers will be moved by how these men’s journey strengthens their faith. Though the men never find the Ark (perhaps, as earlier stated, because the Ark cannot be found), they experience a stronger sense of God’s presence and a resulting closeness to Him at the end of the film. I hope that other audiences members, just like me, experience the same.

While watching the film, one sees how extraordinary and admirable the explorers’ faith is. After just one glimpse at the treacherous mountain side and one shiver from the idea of a night spent on that mountain in freezing conditions, comes the thought, “Why would anyone do that, especially since they have to know the Ark isn’t up there?” One of the archaeologists explains, “There has to be a cause bigger and greater than yourself to motivate you.” These men are not pursuing the Ark just because they want to find it. They are driven by something bigger and greater: God. The men sincerely believe that they are being called and led by God to the Ark, or, as one of them puts it, “If I were receiving something or giving something to God, how could I not go through?” All Christians know that we must heed God’s call, and, according to these men, God is calling them to the Ark.

Despite the team’s faith in their mission, they never exhume the Ark. But for those who think, “Now they’ve learned their lesson;” think again! After the team completed the arduous task of reaching Mt. Ararat (which, by the way, is called “The Painful Mountain” just to give an idea of how difficult it must have been to hike), they faced the disappointment of no Ark to be seen. Still, the men’s attitudes are actually positive; one quotes Thomas Edison when he said, “Failure is a teacher, just a stepping stone on the road to success.” They see this “failure” in not finding the Ark as God’s teaching method. In their minds, God does not want man to give up hope nor determination in uncovering the Ark. The expedition certainly was an educational opportunity. All the men comment on how they learned so much about God and themselves. None of them have any take-backs or regrets; in fact, they all express gratitude to God for the opportunity to gain a clearer understanding of God’s presence and a stronger faith in it. In one of the final moments of the film, they conclude, “I believe the Ark will be found. It’s here for a reason.” Their belief in the Ark—and its eventual discovery—remains unshakable.

To those who are like me, who were always taught that God does not intend for the Ark to be found and any attempt to locate it is a challenge to God, there is a surprise in how much enjoyment and illumination can be gained from Brent Baum’s documentary, Finding Noah: An Adventure of Faith. Although there is nothing wrong with having a differing opinion on the Ark, I still encourage one and all to watch Finding Noah because it will strengthen your faith. As the viewer, I embarked on the same journey with the explorers, and, although none of us discovered the Ark by the end, each of us discovered new things about ourselves and our relationships with God. Like the team of archaeologists, I would not take it back for the world.

The film will play at select theaters on October 8, 2015, via Fathom Events.

Jacob Christian Berger is a graduate of Campbell University. He majored in English with a minor in Theater Arts. Berger is a proud member of Holy Cross Lutheran Church, Clayton, North Carolina.