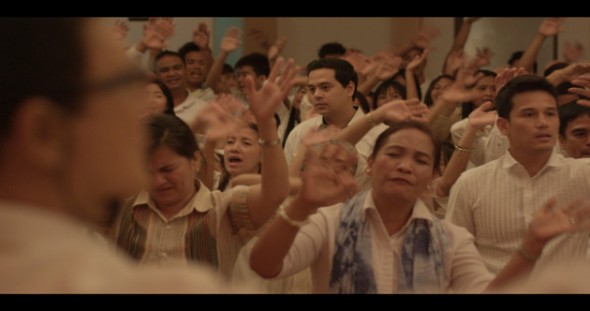 The first hour of Erik Matti’s Honor Thy Father (★★★★) is so good, so rooted in its time and place, that one can’t help but feel a little disappointed that its second half becomes a fairly conventional heist genre film.

By that time, though, the stakes have been sufficiently raised by the film’s subtext. And the back half, while perhaps not as thematically dense as the set-up, nevertheless has some nifty film making. Honor Thy Father was one of my pleasant surprises at the 2015 Toronto International Film Festival.

As the film opens Kaye and Edgar (John Lloyd Cruz) are trying to get members of their charismatic Filipino church to invest in a too-good-to-be-believed-by-anyone-who-doesn’t-believe-God-wants-his-children-to-get-rich-quick scheme. Rather, she is selling them and he is looking on ambiguously. Kaye is clearly more fluent in and comfortable with the church patois, and we are not entirely sure if Edgar’s doubts are about the church, his wife, or both.

Erik Matti told audience members at TIFF that the original title of the film was Ponzi, but he felt that too many people might not get the reference. Given that Honor Thy Father juxtaposes Kaye’s sales pitch with the pastor’s sermon plea for building donations, it is also probable that the original title might have been a bit too incendiary. Who is scamming who? Is church just a giant Ponzi scheme? To what extent are those who buy in doing so knowingly?

The film turns on the inevitable loss of the money as Kaye’s father disappears with the bulk of donations. The other congregants beat up Edgar, kidnap his daughter, loot his home, and threaten worse if he doesn’t pay back all the money. In my favorite scene, Edgar asks a church official to return his father-in-law’s generous donation to the building fund since it was stolen money. The reply goes a long way towards solidifying Edgar’s suspicions about where the church’s heart is.

The latter half of the film revolves around Edgar’s increasingly desperate attempts to come up with the money (plus interest). As he returns to the only people he can trust and plans to rob the people who have let him down, we have a remarkable amount of mixed feelings. At least I did. Part of the difficulty is that the rhetoric that comes from the church sounds orthodox–trust God. And one is always reluctant to co-sign on a “let’s rob the church!” plan. Yet one totally understands Edgar’s anger, and shots of the wealthy digs of the Filipino church leaders helps bellow our pity for Edgar into red-hot anger that has to be righteous, right?

Well even Edgar hesitates before explaining to his daughter that she was right, on second thought, to respond violently to a boy who peeped at her. Who knows what further violence he might have done if his evil had been left unchecked? Later Edgar admits to his family that he still hopes for a different life for daughter than the one he grew up in and is sliding back into. While his own actions evidence his core belief that that Christian teaching sounds good but is used to exploit rather than help the poor, he can’t help but wish financial and, yes, spiritual respectability for his daughter.

The final act of the film has echoes of The Godfather or A Simple Plan as a decent but desperate guy goes further and further down a path of violence that seemingly cannot end well for his soul however it ends for his pocketbook. Yet the end also suggests that Edgar’s break with his previous life is not complete, at least not psychologically. Fear and hate may drive us to damn ourselves, but even then we can’t make ourselves fall out of love or totally repress the knowledge that we were made for something better.