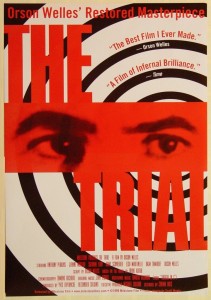 The unsolvable riddles of human existence are the primary preoccupation of Orson Welles’s films, the first of which is Citizen Kane (in which a human life is depicted as, to quote Borges, a “centreless labyrinth”) and the last of which is F for Fake (in which art itself becomes yet another “centreless labyrinth”). How fitting then that Welles adapted Kafka’s The Trial, an obtuse and peculiar narrative about man, society, and the law. As Welles disembodied voice intones during the film’s prologue, The Trial follows the logic of the nightmare; it begins and ends in the abyss.

Welles was incapable of making a film that did not somehow yield to his own distinctive vision (even his hackwork displays his unique flair), but in the broad outline, The Trial adheres to that of Kafka’s novel: protagonist Josef K. (portrayed in the film by Anthony Perkins) awakes to find that he has been arrested, but the details of the charge are withheld from him. The remainder of the story follows his misadventures as he navigates a society that seems designed to thwart his every move as he vainly attempts to establish his innocence.

A parable, taken from one of the novel’s later chapters, serves as the film’s preface. The parable tells of a man seeking admittance to the Law. He stands before the guarded gate of the Law, asking for entry. The entry is refused to him, and, so, intimidated by the guard, he waits. He pleads with the guard, even attempting to bribe his way in, but the guard never relents. After having spent the entirety of his life waiting, the seeker asks the guard why no other individuals have come to the door of the Law. The guard informs him that the door was made only for the seeker and that the seeker alone could have entered it. The guard then shuts the door.

The parable, like the film itself, defies any solution. Like a Lewis Carroll riddle disguised as a Bible passage, it tantalizingly dangles points of interpretive entry only to reveal all entry points as dead ends. Late in the film, the ostensible villain of the film, the law advocate Albert Hastler (played with relish by Welles himself) wields the parable as a weapon against Josef K., demanding Josef’s ultimate subservience and slavery to the system that desires to crush him. Josef K. rejects the parable and, by extension, the world that follows its illogic, but he cannot transcend the nightmare. He, too, is a product of the world. 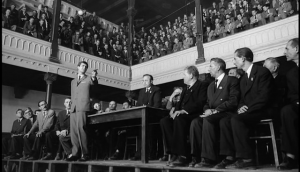 This world is as spatially confused as it is relationally and ideologically confused. Scenes and segments jump from one to the other with disorienting effect, often revealing that two locations other scenes indicated were far apart are actually parts of the same space. By the end of the film, it appears that every location—from the opera house to the hearing room to the cathedral—is united, just different facets of the same oppressive realm, a labyrinth with no exit. (Welles achieved this effect by filming the majority of The Trial in an abandoned train station, so that each of these locations really were different chambers in the same building.)

Welles’s films are about places as much as they are about people, and therefore pay special attention to architecture. Nowhere is this attention more profoundly and lovingly displayed than in Welles’ monologue about Chartres in F for Fake, but it’s present as early as Citizen Kane, where every setting is a mirror image of the people inhabiting that space.

This attention to setting and its effects made Welles especially well-suited to film noir pieces, where his expressionism could run wild. The different environments of The Lady from Shanghai (aquariums, court rooms, Chinese theaters, funhouses) transform a convoluted, thin story into one of the most vivid noir features. Touch of Evil’s iconic opening shot–an extended single take in which the camera floats over rooftops and down city streets–turns its decaying border town into the film’s star. Welles’ chiaroscuro lighting has the effect of bleeding characters into these spaces, as occurs in the clocktower finale of The Stranger. 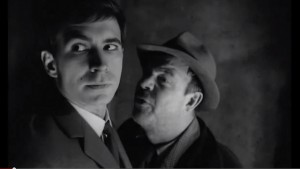 Both stylistically and narratively, The Trial follows after Welles’ noir pictures. Jean Collet pointed out the special relationship that exists between The Trial and the film that preceded it in Welles’ filmography, Touch of Evil, “a meditation on the abuses of the police state.” But the injustices of The Trial are more expansive, and the villains are not just authority figures, but an entire society that regards Josef K. with contempt, that is all too willing to condemn him for an unknown crime.

In this, the specter of the Holocaust raises its head and permeates the film. Welles does not have to twist the narrative to reflect the injustices of World War II. He does not have to: The Trial’s rooms and landscapes are enough to suggest postwar Europe, where crumbling buildings serves a reminders of a passed European golden age that was ravaged by war, and new, imposing modernist structures rise amongst the ruins.

Welles further skewers the rise of the corporation, which is depicted in The Trial as being every bit as dehumanizing as the government. Welles’ vivid depictions of soulless drone workers slaving away paved the way for films like Brazil and The Double, but where those films relied on claustrophobic spaces to suggest oppression, Welles makes enormous spaces unbearable. Josef K.’s arrival at work ranks among the film’s most memorable sequences; he passes hundreds of people sitting at hundreds of desks all typing on hundreds of typewriters, the deafening roar of typewriter keys filling the entirety of the cavernous space. The world of The Trial is always either big enough or small enough that Josef K. can be lost in it.

Josef K.’s relationships in the film–if they can be called that, given that nearly everyone in the film seems to lack the ability or desire to communicate–consist mostly of aborted encounters with women. The lure of eroticism snakes throughout the film, tying the archetype of the femme fatale to the promises of the society that surrounds it: death cloaked in false promises.

Kafka’s Josef K. meets his inevitable end passively, at the end of a knife blade. Welles embellishes upon Kafka’s novel to allow Josef K. a final futile gesture, an act of defiance against the world around him. Left in a rubble pit with a some dynamite, Josef K. laughs wildly as he lifts the dynamite to hurl it at his assailants. He does not throw it in time and is dissolved in the blast.

Even so, Josef K.’s death is not the death of a heroic martyr. The film allows for the possibility that Josef K. is not altogether innocent. Without the nature of the charge having been made clear, how could his guilt ever be truly dismissed? Certainly, Josef K. is not very likable; he’s sniveling, arrogant, and deeply insecure. But the society that surrounds Josef K. is not interested in his innocence or his guilt. The Trial offers no real trial at all. This is a nightmare where an accusation alone is enough to condemn.

Ryan Holt manages the film blog I’ve Seen That Movie Too. He can be followed on Twitter under the handle @_SeenThatMovie.