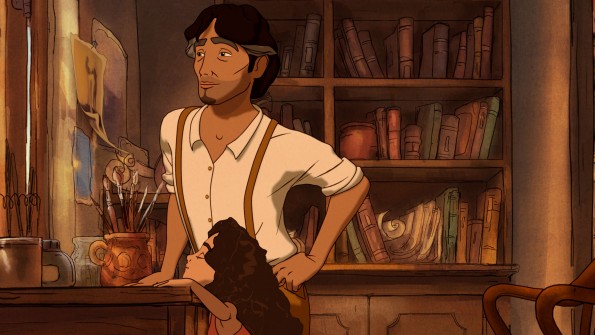 The two films which Salma Hayek’s The Prophet quickly reminded of were Disney’s Aladdin and The Lion King. The similarity with Aladdin struck me during the first scene with the setting of dusty streets in a Middle Eastern country, in which the protagonist Almitra steals from bazaars with the help of a small animal (in this case a seagull) and then climbs roofs to escape the irritated merchants. I was reminded of The Lion King partially because both films have the same director, Roger Allers (The Prophet has multiple directors, accounting for the different animation styles of different segments), but also because both films have a prophetic central character who inspires the protagonist with his spiritual teachings.

In The Prophet that character is named Mustafa, and he is voiced by Liam Neeson. One of his speeches even references mankind’s dependence upon the earth for grain and meat with clear parallels to The Lion King’s “circle of life.” Neeson voices the character with a calm air of authority, reminiscent of the voice work he did for Disney and Walden Media as Aslan in the recent adaptations of the first three Chronicles of Narnia. Unlike Aslan, who was blatantly created to be a Christ figure, contrary to what Neeson claimed five years ago, Mustafa is a figure inspired by several religious leaders, and his sayings consist of truisms with which most major religions would agree. 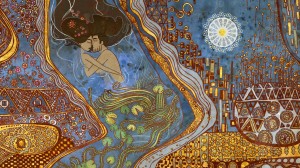 Based on my understanding from reading about Kahlil Gibran, the author of the 1923 book The Prophet, the film’s depiction of Mustafa is consistent with Gibran’s drawing from his Catholic upbringing as well as Islamic and Jewish traditions in an effort to reflect the human condition in a sort of ecumenical mysticism. Gibran’s book is a series of twenty-six philosophical essays with the slimmest of narratives connecting the pieces of prose. Salma Hayek’s film captures both the slightness of the narrative and Gibran’s philosophizing by frequently interrupting the film’s simple narrative of a young girl who wishes to help Mustafa with abstract animated sequences accompanying Neeson’s recitations of Girban’s prose.

I found the simplicity of the story rather refreshing. After Almitra meets Mustafa on the day of his release from prison, she covertly follows him as the soldiers escort him to a ship to take him to his home country. The plot moves from point A to point B without any exaggerated conflict, and while the conclusion may be foregone, the film does not delay arriving there. As the voice of the young Almitra, who has refused to speak since her father died two years ago, Quvenzhané Wallis does a great job with the whines and bird calls Almitra uses to communicate. As Almitra’s mother, producer Salma Hayek creates a sympathetic character trying to find a steady job while raising the unruly girl and maintaining peace among her increasingly irritated neighbors. 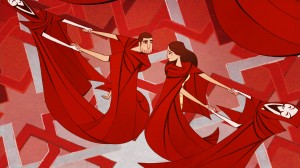 In order to depict Gibran’s philosophizing visually, Hayek and Allers selected eight of Gibran’s writings which Neeson recites as Mustafa’s spiritual advice to the citizens of Orphalese. Each one of those speeches is accompanied by an abstract animated sequence directed and animated by a different team of persons, making Allers more the overseer of the entire film than its director. All eight of those sequences contain some very impressive visuals, and one of them — titled “Love” and directed by Song of the Sea director Tomm Moore — may contain a reference to Eyes Wide Shut. The different styles of the eight sequences reinforce the ecumenical nature of Mustafa’s sayings. 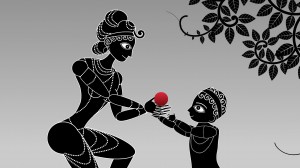 If I have any complaint at all with The Prophet (★★★½) it is that in making sure Mustafa’s speeches can appeal to everyone, the philosophizing comes across as a little half-baked. There’s nothing to disagree with, and he does remind his listeners of some worthwhile pieces of advice, such as all work being noble or children not belonging to their parents, but a little too much of felt like a generic spiritualism. Nonetheless, the animated realizations of Mustafa’s sayings were incredible to behold, and those sequences were surprisingly effective at carrying the film.