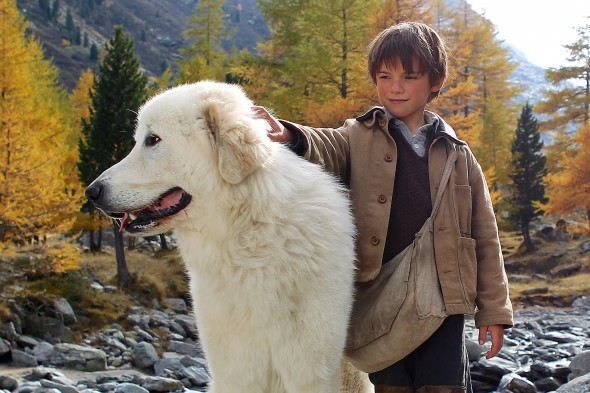 After several impressive bird’s eye shots of the French Alps to establish the location of Belle and Sebastian, (★★★★) the film opens with six year old Sebastian (Félix Bossuet) hiking through the mountains with his figurative grandfather Cesar (Tchéky Karyo) as the two of them hunt for the beast that has been killing Cesar’s sheep. Another party from their mountainside village is also hunting for the beast, and a reckless gunshot from one of that party kills a doe, leaving her young lamb defenseless and alone on the side of a cliff. Cesar mutters something about heartless bastards killing a mother deer with a baby, and he takes the calf to his sheep farm, where one of his ewes will hopefully nurse it. While this film has some aspects that could easily be ripped apart, its presentation is sweet and cute enough that were I to do so I would feel almost as heartless as those hunters.

The film takes place in 1943, and Sebastian’s other mentor, Doctor Guillaume (Dimitri Storoge), secretly leads Jewish refugees across the Alps to Switzerland. The Nazis pursuing the innocent Jews are clearly meant to parallel the hunting party after the innocent beast, not only because Guillaume’s introduction shortly follows a scene of Sebastian discovering “the beast” is harmless and protecting it from the hunters, but also because the Nazi Lieutenant Peter (Andreas Pietschmann) explicitly spells out the parallel that both he and the town officials are hunting what they consider vermin in the mountains. The execution could easily become trite, but the film mostly refrains from becoming so, and it works better than one would expect.

“The beast” is a giant dog whose previous owner abused it, and now it is roaming the mountains and the villagers mistakenly believe killing off their sheep. Sebastian immediately sees a wonderful creature in need of friendship and help, and he provides it. When he convinces the filthy dog to swim through a mountainside pool as a bath, a gorgeous freshly groomed Great Pyrenees emerges, whom the boy dubs “Belle.” Since Sebastian’s relationship with the dog makes a delightful onscreen pairing, and since it serves both as a metaphor and as catalyst for him learning about what is happening in World War II, I can roll with a few farfetched things like a swim perfectly cleaning a dog. After all, it is not that outlandish if viewed from the perspective of a six-year-old boy.

There are other moments which become a little too corny, several of which are inevitable in a story like this, such as Sebastian being resentful toward the misunderstanding adults, one character behaving in a thoroughly inconsistent way to advance the plot, and Belle saving both Guillaume and Cesar’s herd of sheep from four wolves. Great Pyrenees were bred to defend sheep from wolves, but I thought one frightening four wolves was a bit extreme, and the way the scene plays out was a bit contrived.

On the other hand, the central story is delightfully sweet, and for my tastes it never turned into treacle. The French Alps look fantastic, and the frequent plane shots have impressive clarity and focus. Even from a long distance, the white Belle remains clear amidst a background of fresh mountain snow. The performances are all strong, and director Nicolas Vanier has assembled a cast with whom I am happy to spend ninety minutes in their mountain village.

Finally, it must be said that Great Pyrenees are beautiful dogs, and the one the filmmakers got to play Belle is absolutely elegant. Watching the young Félix Bossuet interact with the very intelligent and friendly dog is so much fun that if Belle and Sebastian were a mainstream Hollywood film, I would fully expect parents to be implored by impressionable children to get a Great Pyrenees.