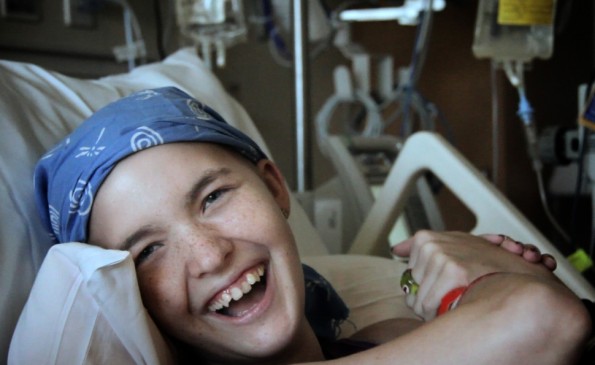 It sounds like the premise for a “Stranger Danger” Afterschool Special.  A cancer-ridden teen with a troubled home life seeks comfort and shelter with a movie director in his 50’s.  In spite of this eyebrow-raising premise, Farewell to Hollywood nonetheless inspires, and it certainly never bores.

When established documentarian Henry Corra meets aspiring director Regina (Reggie) Nicholson at the Silverdocs Film Festival, they agree to make a film about Reggie’s life.  It’s easy to see why Henry is so quickly taken with Reggie.  At seventeen, she’s a winning mix of childlikeness and wisdom-beyond-her-years.  One moment she’s crying tears into her teddy bear, the next she’s holding her own in a phone conversation with a medical insurance advisor.  She’s confident and articulate, yet willing to show emotional vulnerability.

Reggie and Henry also share a love of filmcraft, with Reggie proclaiming that she’s never happier than when she’s watching or making a movie.  (This is nicely illustrated by the splicing of aptly metaphorical classic movie scenes into pivotal moments of Farewell to Hollywood’s storyline.)

Alas, Reggie has reasons aplenty to be unhappy.  At age 16, she was diagnosed with osteosarcoma, and has since faced endless rounds of surgery and chemo.  Making matters worse, her relationship with her parents is an exhausting, high drama power struggle.

In viewing Farewell to Hollywood, I couldn’t help comparing the Nicholson family dynamics to those on display in last year’s (forgive my bluntness) “teen with cancer” movie.  In The Fault in our Stars, Hazel and Augustus’ parents were exemplary, intuiting when to rush in with embraces and empathy, and when to back off and give their children breathing room.

Judging by what we see in Farewell to Hollywood, Mary and Bob Nicholson occupy the opposite end of the parenting spectrum.  Using financial blackmail and emotional extortion, Reggie’s parents are codependents extraordinaire.  The icing on the dysfunctional cake arrives when Mary tells Henry, following another round of chemo, that Reggie’s “needing me makes me feel good [and] gave me a purpose again.”  Nothing like seeing your kid on the verge of death to help a mom feel wanted!

To be fair, we’re only getting Henry and Reggie’s edited version of the “truth” in Farewell to Hollywood.  A part of me thinks we need a Rashomon-like companion film, to hear Mary and Bob’s side of the story.  Frankly, the growing intimacy between our protagonists, with late night video chats, lots of texting, and hours of quality time together would make even non-helicopter parents uneasy.

With so many moral dilemmas to explore, I realize I’ve barely written of the many aesthetic and storytelling merits of Reggie and Henry’s movie.  In short, the melding of the duo’s respective camerawork, Skype conversations, and vlogs creates a satisfyingly kinetic narrative.  And though the music of Sparklehorse, Aphex Twin, and Spiritualized don’t form the soundtrack to my life, their hushed lyrics and soft electric buzz work well for Reggie’s tale.

The legendary Japanese director Akira Kurosawa famously uttered, “To be an artist is to never avert your eyes.”  With its unwavering gaze upon the awfulness of childhood cancer, Farewell to Hollywood meets the Kurosawa criteria of artistry.  With its visceral immersion into surgical excision, the toxicity of chemo meds, and painkiller delirium, our stomachs aren’t spared.  Knowing that Reggie will be dead by film’s end (the prologue makes this clear), our tear ducts get a workout, too.

Since I write for a website that “hosts the conversation on faith,” it’s worth taking a couple of paragraphs to reflect on the spiritual aspects of Reggie and Henry’s film.  While my own professional experience leaves me dubious about the expertise of many “Christian counselors,” Reggie found a winner.  Meeting regularly in a Methodist church, Liesl helps Reggie set limits on her parents’ conduct, yet never blanches at her client’s frequent f-bombs.

Despite my lingering uneasiness over Reggie and Henry’s closeness, I feel compelled to ultimately give their relationship the benefit of the doubt.  As a humanist, I applaud the compassion Henry extends to Reggie, as well as the space she’s furnished to make autonomous, life-or-death medical decisions.

For Reggie’s part, she commendably finds meaning through creativity while facing mortality, and expresses gratitude for the opportunities given her by Henry. It’s hard to naysay all that goodness, not to mention Reggie’s fortitude and clarity.  Towards the end of Farewell to Hollywood, she tells the camera, “If it’s a struggle to live, you better fucking know what you’re struggling for.”  Words to live, and die, by.

(Parents’ guide:  Farewell to Hollywood is unrated.  In light of its occasional strong language and intense, graphically illustrated subject matter, I’d recommend this film for older teens and adults only.)