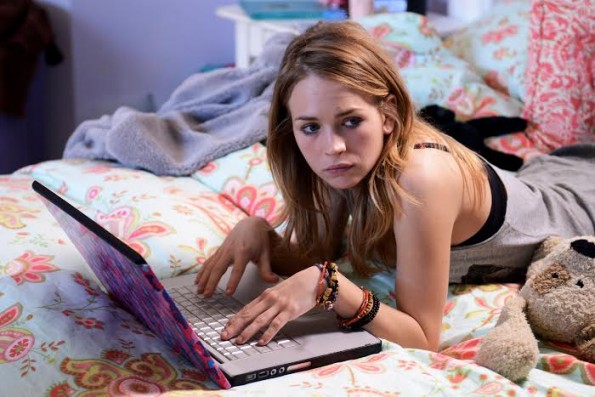 In one of the opening scenes of Ask Me Anything, a new film directed and written by Allison Burnett, a teen girl, named Katie Kampenfelt (played by Britt Robertson), tells her guidance counselor that she wants to take a gap-year between high school and college. Unhappy with her counselor’s warning that “you need structure,” Katie steps right outside and lights a cigarette. A frequent motif in Ask Me Anything, smoking is a nagging habit of Katie and the legion of men she has a sexual relationships with throughout the film. Everyone knows the risk, and yet, no one is able to quit.

Burnett’s Ask Me Anything, adapted from his own 2010 novel, Undiscovered Gyrl, markets itself as a distinctly modern coming-of-age tale. Katie starts a blog and becomes (almost) famous. She has lots of consequence-free sex because it “just feels so good.” By skipping out on college to continue an affair with a thirtysomething community college professor, Dan Gallo (Justin Long), Kate is forced to face down the perpetual millennial quandary of finding a job in tough economic times. Unfortunately, Burnett proceeds to eschew almost all of the complexity and subtly that Ask Me Anything deserves.

Ask Me Anything’s problems begin with its wooden dialogue and script. One of Kate’s employers, a aging bookseller named Glen (Martin Sheen), remarks that “for me, reading is transcendent experience.” Kate’s response (“What does that mean, exactly?”) is so painfully grating, that Glen must essentially quote the dictionary definition of “transcendent.” In this and other situations, dialogue is used to underline painfully obvious conflict and thematic development. When Katie befriends a depressed Princeton student, Joel (Max Hoffman), halfway through the film, Joel offers some of the most clichéd advice possible, explaining to her that “your problems go way beyond guys.” Anyone who has watched even ten minutes of Ask Me Anything could tell you that.

Despite featuring the hard-working Robertson in virtually every scene, Burnett’s gender politics are confusing and contradictory. Katie may be promiscuous, but it’s unclear whether Burnett is condemning or endorsing modern, female sexuality. Ask Me Anything lacks any other developed, female characters, leaving us unable to compare Katie’s choices with an alternative. The male characters of the film, including Dan and a middle-aged hedge fund manager, Paul (Christian Slater), whom Katie works for later in the film, are interested in having sex with this attractive teenager and…not much else. The only men who aren’t romantically involved with Katie are her father and the bookseller, Glen, yet even they manage to be creepy.

Burnett, who is a man, also seems to objectify Robertson in his film. She walks around her house in a near-constant state of half-nakedness, but the men she has relationships with never have to take off more than their shirt. In one scene, Katie’s friend, Jade (Gia Mantegna), is shown getting out of a bathroom shower, her breasts completely exposed. What this has to do with plot, thematic, or character development beats me.

Unfortunately, Ask Me Anything isn’t just infected by a sexist double-standards; the film has a race problem as well. Katie’s therapist and counselor are both racial minorities, African-American and Asian, respectively. A villainous long-ago sex offender is also a minority. Dan’s wife, whom he is cheating on, is French. Notice a trend? Burnett’s main cast is all-white, with the smallest parts going to minorities. Ask Me Anything doesn’t create the impression of diversity; instead, the film has the feeling of tokenism.

As Ask Me Anything reaches the end of its 100-minute run-time, Burnett throws in a series of plot twists. The ending, with its surprising revelations about the film’s unreliable narration, brings to mind Gone Girl, although that novel was published two years after Burnett’s. By the time the film reaches its conclusion, Burnett has ramped up the suspense, seemingly setting up for a sequel, even if the audience’s interest is long gone.

What is truly regrettable about Ask Me Anything is that the film never even fulfills its initial promise: to deliver a fun coming-of-age tale. Katie doesn’t take responsibility for her relationships or her personal troubles. She doesn’t discover ‘meaning’ in her life or make a difference in anyone else’s. For all of its gratuitous sex, Ask Me Anything cannot avoid the sense that Burnett has produced something awfully childish.

Ask Me Anything is available On Demand beginning December 19, 2014.