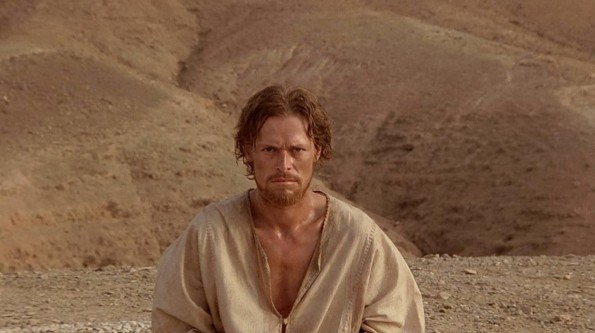 Note: This piece originally ran at Christianity Today Movies & TV. I thought it worth re-posting in light of the recent publicity surrounding Sony’s cancellation of The Interview in the wake of threats against theaters showing the film.

“I’ve always wanted to do films of the spirit, spiritual films, but religion gets in the way.”
—Martin Scorsese

There are (at least) two competing stories that get told about The Last Temptation of Christ‘s tortured path to the screen twenty-five years ago. The first one, all but taken for granted in Hollywood, is that Martin Scorsese is a sincere seeker who was temporarily thwarted by institutional religious bigotry. But he doggedly persisted against all odds to make a great work of art.

The second story is taken as the obvious but suppressed truth by those who tell it. They maintain that a secular entertainment community deliberately provoked a controversy to help rally support for a troubled, inferior film.

Whichever version you accept (or remember), The Last Temptation marked a tipping point in the American “culture wars.” There had been other films, and have been since, that generated protest, disdain, or both. Michael Haneke’s Amour, for instance, recently drew fire for (its detractors argue) promoting the culture of death. But it also garnered praise outside of religious circles, not to mention a Palme d’Or at the Cannes Film Festival.

Last Temptation wasn’t simply criticized: it helped establish the battle lines. It is the prime example in the book by Michael Medved that gave this particular battlefield a name:  Hollywood vs. America.

And at least once, the battle was not just metaphorical. An attack at a theater showing the film in Paris left at least one viewer burned and several others injured. The venue had to close for three years to be remodeled.

It’s fascinating to listen to the commentary track on the film’s Criterion Collection DVD, released in 2000. Made with a $7 million budget for Universal Studios after Paramount gave up the picture, the film begins with a written disclaimer that it is not based on the Gospels but is a “fictional exploration of the eternal spiritual conflict” which, it says, is the clash of “spirit” and “flesh” that grows out of the “yearning of man to attain God.”

On the DVD commentary, screenwriter Paul Schrader—one of Calvin College’s more controversial graduates—admits that this use of Jesus as a metaphor is “technically” blasphemous. But he claims that the critics of the film never made a sophisticated critique. Instead, they were enraged by just one thing: that the movie showed sexual contact between Jesus and Mary Magdalene. This is the greatest of the temptations that Jesus overcomes by choosing to remain on the cross and be crucified.

On the commentary track, the film’s creators don’t agree about just what sort of response they expected. Scorsese claims that he did not think it would be such a big controversy. But Schrader and Jay Cocks (who helped revise the script) say they anticipated the responses. They state alternately that they knew it would “upset people” (but that disagreement is good and healthy) and that it would be “willfully misunderstood by some” and “might” scandalize others.

Whatever Scorsese’s expectations during filming—it’s worth remembering that at least one studio backed away from even making the film—he reportedly did not attend its premiere. That event, replete with security concerns so new and alien at the time but so depressingly normal today, is another reminder of the ways America has changed in the last quarter century.

But for those, like me, who did not see it when it was originally released, the biggest surprise is how poorly this film has stood the test of time.

The opening shot shows Jesus rolling on the ground in pain, establishing what Schrader admits was a deliberate motif of God as a headache that Jesus cannot get rid of. Many of the scenes are self-consciously small. Scorsese states that he scaled back the numbers and scope of scenes described in the Bible, convinced from his own research that the remote locations and ancient lack of transportation would have made these events smaller than legend and imagination had previously described them.

But a much more serious problem than the fantasy temptation sequences (for any believing Christian, anyhow) is that in the film, Jesus becomes only gradually aware of God’s plan. In the end he achieves deity, rather than incarnating it.

This motif means there are frequent shifts in tone and style that keep the film from forming a cohesive portrait of Jesus and the world he occupies. In an early scene, Jesus watches Mary Magdalene have sex (and is then alternately tempted and scorned by her when he rejects her advances). The filmmakers say the scene illustrates humans’ ability to be close to temptation but not sin, but it depicts Jesus as repressed and frightened by Mary’s body, rather than capable of looking past it.

There’s more. John the Baptist and his followers are deliberately eroticized—the director claims that sexual passion is always near the surface of religious fervor. Jesus is “surprised” by his own healing abilities. Scorsese admits to thinking that the wilderness temptations were a good place to interject some much-needed humor into a narrative that is supposed to embody all human experiences.

But the strangest stylistic shift comes in a scene in which Jesus removes his own beating heart from his chest and holds it in his hands for the crowd to see. According to Scorsese, this scene is supposed to blur the lines between possible charlatanry and genuine miracle, making it clear that Jesus’s witnesses sincerely thought they saw that which had no scientific explanation. And yet, nowhere else does the film adopt a disciple’s point of view. Even that possible message is blunted by the more powerful and pointed depiction of Paul as a self-aware liar who is constructing a myth of Jesus for his own ends (though this occurs in the final dream sequence, where Jesus becomes aware of what will happen if he doesn’t accept crucifixion.)

Some who defend the film say that its lack of internal clarity is the fault of Kazantzakis’s novel. For example, Carol Iannone, a conservative writer whom G. W. Bush nominated to serve on the board of the National Endowment for the Humanities, defended the film in the conservative Catholic magazine First Things. She stressed the good intentions of the artists, however misguided the results. Kazantzakis, “in order to speak to modern man,” she said, must make Jesus “to bear the infirmities of our age—the doubt, the angst, the fear and trembling, the existential dread, and yes, even the sexual obsessiveness.” She quotes Scorsese’s own desire to create, like Kazantzakis, “a parable that is fresh and alive.”

On the Criterion DVD, Scorsese recalls answering questioners at Paramount in 1983 who asked him why he wanted to make the film with “I want to get to know Jesus better.” On the other hand, he also speaks of actor Willem Dafoe’s traditional “candy box Jesus” look as lulling audiences into thinking this is the Jesus they already know, allowing him and the film to catch them “off guard.”

Today, though, watching the film suggests a simpler theory about the film. It’s not a living parable or an attempt to deliberately provoke the audience.

It’s that confused notions of Jesus led to a confused film about him.

Wanting to create something “fresh,” but seemingly without a strong sense of his own about the identity of his protagonist, Scorsese took a modernist fable by Kazantzakis and added Schrader’s deliberate attempts to obscure the traditional biblical elements that, after all, make Jesus worth attending to in the first place. He emerged with a film that reeks with liberal good intentions but is artistically uneven and theologically incoherent.

So how do we account for the film’s critical success? (Positive reviews outnumber pans by a rate of approximately fifteen to one on Rotten Tomatoes and Metacritic.) Medved says that critics did not want to be seen as endorsing evangelical or fundamentalist protests.

It’s also possible that critics were swayed by Scorsese’s status in American cinema. Although the director wasn’t cemented as the giant he is now in the late eighties, it’s still true that The King of Comedy, After Hours, and The Color of Money (his last three films before Last Temptation) are all generally rated higher by critics than casual moviegoers. That Scorsese received an Academy Award nomination for Best Director while no other member of the cast or crew was nominated may help support the idea that his own reputation and popularity made critics evaluate the film through a rose-colored lens.

Given Scorsese’s irreproachable status, he may be the only one capable of criticizing The Last Temptation of Christ without being dismissed as a prejudiced zealot. In one of his more candid moments during the director commentary, he admits that not all of the criticism of the film is reactionary or undeserved:

. . . I mean it’s difficult thinking that a film is successful because you succeeded in putting on screen what you wanted to get on, but does it communicate? Does it mean anything to anybody? I’m not sure. I only know now that you never know. That’s the reality of it, you just keep doing it. But dealing with the imagery head on and dealing with these themes directly in the context of the story of the time of two thousand years ago may have been more difficult and may not have been entirely as successful as I wanted it to be, because I’m not too satisfied with it. It’s probably more . . . fitting for me to be dealing with these themes on an everyday scale the way I did in Mean Streets or Raging Bull or even The King of Comedy.

Scorsese collaborator Jay Cocks suggests that the real artistic importance of The Last Temptation of Christ may have been that it pushed the director to tell stories that were larger in scope than some of his smaller, more personal, character driven films did. And Scorsese has continued to explore spiritual themes—particularly whether or not individual character is determined by harsh environments.

While The Age of Innocence, The Gangs of New York, Kundun, or Casino are modern stories, they are hardly told on an “everyday scale.” And Scorsese’s successful recent movies, including The Departed, Shutter Island, and Hugo, show that he is still interested in personal stories, and in telling them from within a broader setting.

As it often does, perhaps time will present us with a third narrative about the history of The Last Temptation, one that mixes elements from both sides of a cultural divide. Perhaps in another twenty-five years from now, we’ll have a story of the film as neither good theology nor good art. But maybe we’ll say that, at the very least, it helped pave the way for better things to come.