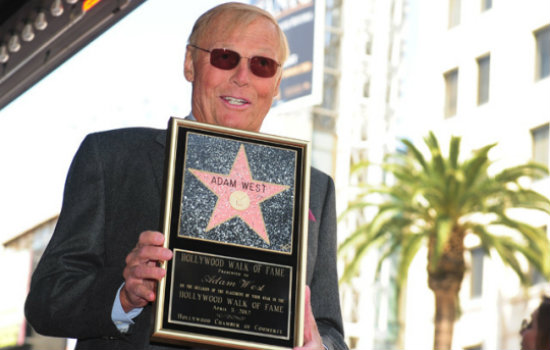 “We wanted to call you with some good news.”

“You got a star on the Walk of Fame!”

There is a dead silence on the other end of the line, and suddenly West’s voice cuts in, muttering, “Excuse me, I dropped the phone,” in pure shock.

Adam West is Batman. Although the 86 year old actor has appeared in over a hundred other television shows, movies, and plays, his legacy will always lie in a Saturday morning television show that has inspired generations of boys and girls for the last 48 years.

Born in Walla Walla, Washington, William West Anderson, the son of a farmer and an opera singer, grew up at the movie theater  in the age of classic Hollywood. “I was caught up in the fantasies that Hollywood produced.”

West, made his film debut in 1959 in The Young Philadelphians, alongside Paul Newman. His decision to move to Hollywood was brought on by his mother’s dreams of becoming a famous singer, and West hoped that through his own experiences, he “would be able to find that world for her.”

West took on the role of Batman in 1966, after he played a similar character in a Nestle commercial. Alongside Burt Ward as Robin, West became the face of the character, from 1966-1969, for 120 episodes. The character soon became iconic, inspiring merchandise, costuming, films, and legions of fans.

Starring Adam West  makes no small matter of West’s role as Batman, opening with a song proclaiming his many virtues and acting abilities. The film transitions to showing dedicated fans, people who have spent countless hours and hundreds of dollars on their Batman and Robin costumes, people who are willing to spend hours outside of their normal jobs and lives to be a superhero for a day.

West’s impact is evident just by these fans alone, and the film highlights this especially. The film itself is clearly a work of love, the effort of someone passionate about his or her subject matter. It takes its time to explore West’s personal life, making sure to emphasize his interests and personal hobbies besides his role as Batman. West has six children, and the film speaks with all of them, gaining their insights into having a famous father. West is devoted to his family, and the film made sure to show familial scenes of the group gathered around the table or enjoying an evening together.

The plot is structured around West’s progress towards gaining a star on the Walk of Fame. Each year, West’s daughter calls him, and each year the answer is the same, a “Not this year, Dad.” West, although acting for the last 55 years, gained his star in 2011, long overdue in the minds of his fans and family.

Another theme running through the film, one that adds an element of fun to an already enjoyable work, is how much West enjoys playing his character, making fun of the often overly serious Bruce Wayne. He has lent his voice to Family Guy, playing a characterized version of himself, one of his favorite roles of his career. Additionally, West has taken up painting, and his works are highlighted in the film. West is clearly very proud of his artwork, as are his children; his oldest son pointing out his father’s “real artistic talent.”

“I call him a pop culture expressionist, because that’s what he is!” says David W. Streets, owner of an art gallery where West displays his work. West’s art is reminiscent of Picasso, full of bright colors and abstract shapes, reflecting his own unique mind and thought processes.

The film follows a progression of West’s life, interacting with his costars and family and friends; however, one missing figure from the film was West’s costar Burt Ward, who appears only in a few seconds of footage. Although Ward has attended conventions and signings over the last few decades, the directors were not able to get in touch with him for the film. Either way, it seemed odd that one half of the famous duo was scarcely involved.

The film is a work of love for both producers and for West’s family members, all of whom shared in his success as he gained his star and the recognition they felt he deserved. The film was an enjoyable experience overall, never slow and always fun.

Rachel Davis is a freelance journalist who has previously written feature articles for the Campbell University website.