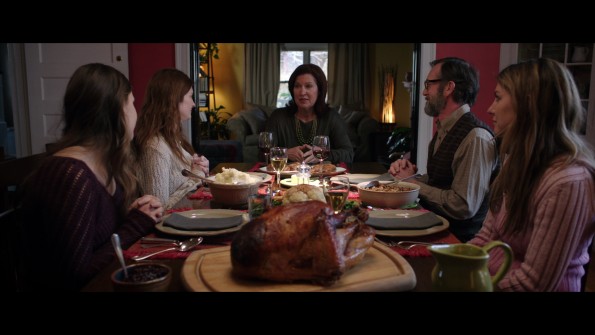 It would be difficult–perhaps impossible–to separate one’s response to and interest in Hollidaysburg (★★½) from the fact that it is a product of STARZ’s The Chair.

In the newest reality show slash talent contest two filmmakers are presented with the same script and provided with financing to film it. Realistically, then, half of Hollidaysburg‘s interest is how it compares to another film that we haven’t yet seen. At least at first. As time passes will either film stand on its own as something people want to watch? Will this film be the vehicle through which a career is launched or a widow through which we glimpse the proverbial fifteen minutes of fame?

Complicating those judgments, at least for me, is the fact that the weakest element of Hollidaysburg is the one the director had no control over: the script. That’s not surprising, really. It’s hard to believe the show could outbid a studio or production company for a script that anyone else wanted. What we get, then, is a fairly generic indie comedy about kids coming home from college to spend Thanksgiving in small town Pennsylvania. We get a succession of one on one scenes that play competently enough but always feel a bit like drama exercises rather than parts of a broader narrative.

It’s trendy for stories about Millennials to focus on sex and to extract comedy from their lackadaisical approach to that subject and practice. Hollidaysburg isn’t as annoying as Girls or Fort Tilden in that regard, mostly because its characters still have some emotional attachments. But it’s hardly a romantic film, and since it’s also not super funny, I wasn’t sure what audience it was pitched towards.

Of course none of that matters much in the context of the film’s origin. What we want to know about, what we are invited to focus on, is the direction. Martemucci may not have much to work with in terms of story, but she collects a team of actors who are all on the same page–too often in indie projects someone goes rogue–and she shoots them well. I kept looking for a signature moment or style, but the director eschews a lot of flourishes, perhaps sensing that the surest sign of competence is not over-reaching the first time out of the box.

Hollidaysburg did make me want to see her competitor’s film, so Martemucci did will by the series. It also made me want to see what she could do if she got to choose her own material, so she did fine by herself, too.

The film is currently available for digital download across most pay-per-view platforms, and interested viewers can follow the production history on The Chair, which is currently airing on STARZ.