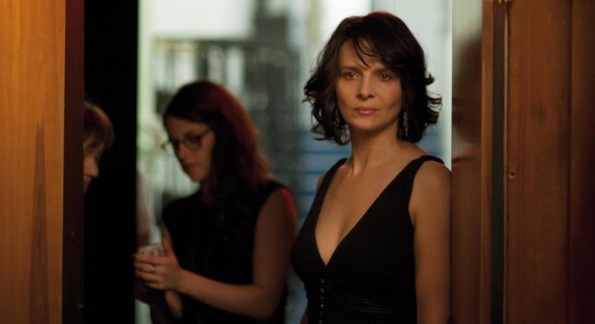 The Clouds of Sils Maria, the new film by Olivier Assayas, is a carefully observed, rich and subtle melodrama of the sort that fans of the director’s previous works should enjoy immensely. It features the incomparable Juliet Binoche in the lead role of Maria Enders, and it includes terrific supporting performances from Kristen Stewart as Valentine and Chloë Grace Moretz (in one of her four films playing at TIFF 2014) as Jo-Ann Ellis. Assayas has provided his three actresses with a script that really allows them to showcase their acting chops — Stewart in particular is a minor revelation. Because the character portraits are more precise than they might be in the average film, Clouds would seemingly reward careful, even repeat, viewing.

That’s a quality I esteem pretty highly, in a film coming from people whose work I generally esteem. If you sense that’s a preface to my beginning to backpedal, I can only reaffirm that I have nothing particularly negative to say about the film. It left me a little cold, never quite engaging me emotionally, even while I was admiring its virtuosity.

Maria is an aging actress whose breakthrough role came in a Bergmanesque drama about the relationship between an older woman and her younger…protege? assistant? lover?. As the film opens Maria is heading off to receive an award for her reclusive mentor, a writer who refuses to go to the ceremony himself. Soon after, she is offered a a chance to star in a revival of the drama that made her famous, this time in the role of the older woman. The role that made her famous will be filled by a Hollywood ingenue (Moretz) who has recently starred in an X-Menesque sci-fi flick and who has plenty of viral videos on the Internet in which she badmouths just about everyone. One of the welcome bits of levity in the film comes when Maria and Valentine sneak off to watch (and later discuss) the Hollywood film.

The meditations on stardom are one of the many many ways the film works. Maria dismisses Jo-Ann’s work as less artistic and important than her own, but Valentine pushes back on her, drawing parallels between Jo-Ann’s work and that of Maria’s earlier days. When the two prospective stars finally meet, the scene is filled with delicious irony. Jo-Ann praises her elder colleague profusely, claiming to have been inspired to act by one of Maria’s previous films but unable to recall its title. (“…the movie you did with Harrison Ford….”)  Is Jo-Ann deliberately tweaking her new co-worker or is she sincere in her claims of being starstruck herself? Maria feigns disinterest in the baser, paparazzi driven side of the industry, but when she is alone she checks out Jo-Ann’s videos and smiles appreciatively when she tells a reporter catching her in a “gotcha” moment to “do your job, you’re a fucking reporter.”

I thought the film was the better for not making Jo-Ann’s character too nasty nor Maria’s character entirely sympathetic. For all the insinuations that younger starlets are more pampered and superficial, it’s hard to miss the implications of Valentine asking, “You want me to finish it for you?” when Maria struggles to write out a testimonial to the man to whom she says she “owes everything.”

What didn’t entirely work for me were the central scenes in which Valentine goes to a retreat with Maria to run lines. Because we don’t know the imaginary play, we come to realize that (by design) it is hard to distinguish between when Valentine and Maria are speaking to each other and when they are in character. It’s easy enough to admire the cleverness of the writing and acting here, and I did. But admiring the architecture of a scene and being moved by it to reflect on deeper themes are two different things. One could, I suppose, reflect on the fact that we often conflate our stars with their characters and that in a twenty-four hour infotainment cycle we hardly know when someone is performing as opposed to just being herself.

That’s not a profound or new revelation though. A more subtly made point might be made about how the roles we choose to play (or are chosen for) actually shape who we become in more deterministic ways than we normally concede. It’s Kurt Vonnegut’s old rube about being careful who (or what) we pretend to be, since in the end we become what we pretend to be. That’s a theme I could get behind, but it would have been more powerful in the film if we actually got more of the play–if the theme were illustrated rather than just asserted after the fact. We get a few references to what Maria used to be like, and she speaks pretty openly about why taking on this new role scares her. But given that we sometimes don’t know when she is performing and when she is not, the film’s hall may have one too many mirrors in it. It’s hard to lament the loss of Maria’s core self/true identity if we aren’t sure we ever saw it in the first place.

Those quibbles aside, The Clouds of Sils Maria (★★★½) consistently entertains and engages.