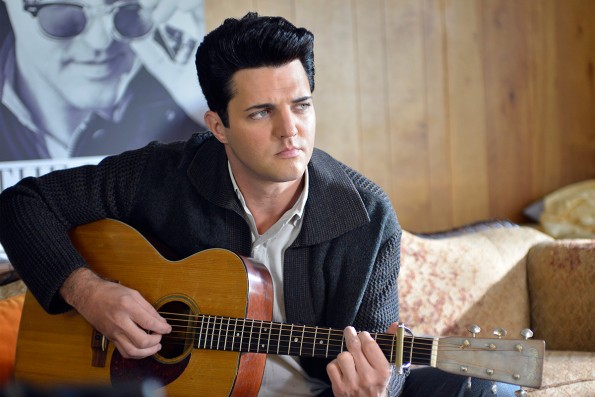 Blake Rayne says film acting was “always on my bucket list of things” but that without the connections or time to pursue it, he wasn’t sure it would ever happen. The story of how he was cast in the double role of Ryan Wade/Drexel Hemsley is, in a way, as archetypal as the one The Identical tells about his character. Rayne was working at a recording studio in Nashville, when the film’s producers visited. Their film needed someone who could sing well enough to be credible as a rockabilly crooner (and his identical twin). The fact that Rayne bears some physical resemblance to a young Elvis Presley in the film couldn’t have hurt either.

Rayne gently disputes the notion, though, that Ryan is meant to be simply an Elvis doppelganger, claiming that in his mind the character is “”more of a conglomerate” of many rock idols. Early in the film the associations with Elvis are stronger, particularly in dress and make up. Later looks suggest Jim Morrison or, perhaps, Jerry Lee Lewis, and he worked with a dance coach to vary the style of stage performances throughout the film. Watch closely, he says, and you might see “a little Jackie Wilson, a little James Brown.”

That’s a tall order for an actor taking on his first movie role. I asked Rayne if channeling such legendary figures, most of whom had plenty of archival footage that could be consulted, was an intimidating task. He was generous with his praise for his more experienced co-stars, particularly Ray Liotta, who Rayne said was “the one I watched the most” in order to learn to “care about the craft.” What did he see in Liotta’s approach that he tried to emulate? “Every scene, every day, he was focused, he was prepared–he had done his homework.” Rayne wondered if people realize how much work goes into making a film. Success, he learned, was not just about what one did while the cameras were rolling.

If taking on the lead role opposite more established stars was a tall order, Rayne acquitted himself well. His performance in the film is quieter and more nuanced than one is used to seeing from many first timers. He listens well. The actor himself concedes that when the cameras start filming, “Your natural instinct is that you have to do something.” But being more emotive or talkative isn’t always the right choice, especially for a character who is “shyer and more introverted.”

Rayne shows just a touch of that shyness when discussions turn from his character or craft to questions about his own life. He admits that Ryan’s arc is “so close to my own life story” but seems reluctant to get into too many specifics. “I grew up in a very strict family, religious family” he says. Because of his family’s financial situation, a lot of emphasis was put on his succeeding in “sports and grades.” He didn’t feel free to pursue his own passions or dreams “until after I got out of college.”

The Identical tells the story of twin boys, one raised by his biological parents and the other given over to a minister (Liotta) and his wife in an adoption. Reece Wade pushes his son to follow in his footsteps and become a preacher, but Ryan’s first love is music. One of the things that is nice about the film as one directed towards Christian viewers is that it is a bit more mature in questioning some of our (i.e. Christians’) assumptions about the sacred/secular dichotomies we fall into. It would seem to me to be a useful discussion starter for those who are thinking about the “Incarnational” tradition in Renovare‘s Spiritual Formation Workbook.

The Identical opens in theaters on September 5. Here is a clip of Blake Rayne in the film: