I don’t feel clinically qualified to label it a full-blown sexual panic, but the nomination of Brokeback Mountain for an Academy Award for Best Motion Picture ten years ago appeared to cause some people I knew genuine distress.

A decade later, it is hard to approach a film festival or awards season without seeing at least one high profile GLBTQ film. This year’s Toronto Film Festival featured Eddie Redmayne in The Danish Girl, Jake Gyllenhaal befriending a not-at-all-confused-about-his-orientation adolescent (“I imagine his d— in my mouth”) in Demolition, an even less confused transgender teen in About Ray, Julianne Moore and Ellen Page as domestic partners in Freeheld, and a high-profile dramatization of the origin of Gay Pride in Stonewall. More artistic, but no less gay, Todd Haynes’s Carol showed at the Virginia Film Festival less than two months later.

Inclusion is a fine metric, but of those films, only Carol has parlayed the fanfare with which it entered the Oscar race into any sort of serious awards consideration…and that for the acting. While we may still think it’s daring for performers to take on gay roles, it doesn’t appear that we’re quite ready to embrace the stories these films tell as transcending their niche audience. We all remember that Brokeback lost, right? To Crash? The inability of these films to garner serious Best Picture consideration may be seen as a sign that the pendulum that marks social acceptance is swinging back the other way.

Or maybe, just maybe, we’re a bit more discriminating in our expectations. Maybe it is no longer enough for a film’s heart–and politics–to be in the right place. Maybe it also has to be, you know, a good movie.  The jury is still out on Carol. Early returns are promising, though I’ve never been a huge Haynes fan. (I appreciated Far From Heaven for what it was, but my admiration of his films is always aesthetic. They reach me on an artistic but rarely on a personal level.) Stonewall arrived with all the credibility the auteur of Anonymous could muster and disappeared from theaters practically before anyone could be bothered to be bothered by its presence. Demolition‘s wide release got pushed to 2016 after early reviews from Toronto failed to generate any awards type buzz. 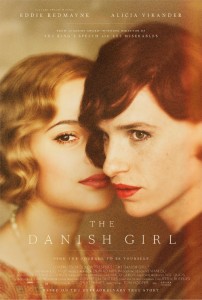 That leaves The Danish Girl as the GLBTQ film most likely to succeed. Going into Toronto, it seemed to have timed the market to perfection. Bruce Jenner’s transition to Caitlyn prompted a broad cultural debate about gender identity, providing a name and a face to a still abstract (to some) debate. Eddie Redmayne’s own award for last year’s The Theory of Everything had not lost it’s luster even in the wake of Jupiter Ascending. His co-star, Alicia Vikander, wowed audiences and SXSW critics at Ex Machina‘s premiere. Tom Hooper had already corralled one golden statue for directing The King’s Speech and helped Anne Hathaway (Les Miserable) and Colin Firth (The King’s Speech) score their own acting Oscars. The Danish Girl seemed to enter the pre-Awards-season as the movie to beat. By the time Toronto was over, it was an afterthought, not only to Spotlight, but to…The Martian!

Well, making a movie is a strange thing. All the parts have to not only work but work together. Intentions can be good but execution has to match it. I was–and am–in the camp that thought The Danish Girl was so overawed by its own subject matter that it expended all its energy trying to be respectful and forgot to be gripping. Redmayne plays Einar Wegener, an artist who cross-dresses to pose for his wife’s painting and gradually comes to realize that he identifies as a woman. Vikander plays Gerda, the wife who loves her husband enough to allow/encourage him to be who s/he is. Einar seeks and is eventually accepted for the first ever sexual reassignment surgery.

I can point, more or less, to the exact moment The Danish Girl lost me. Einar explains the life-threatening surgery thus: “God made me a woman. The doctor is curing me of the disease that is my disguise.” That’s a nifty piece of rhetorical gymnastics, one that acknowledges God as benevolent creator and yet still allows for gender reassignment to be conceived as corrective rather than elective surgery. Try to parse it, though, and it makes no biological, sociological, or theological sense. The words are all used emotively but without denotations. Was it C.S. Lewis that once opined that you can’t turn nonsense into sense by inserting the word “God” before it?

I would have liked and esteemed The Danish Girl more had it worried less about pleasing everyone. Even if a film’s answers are not ones I care for, I always respect those that speak their own perceived truths to me more than those that sidestep the questions they anticipate.