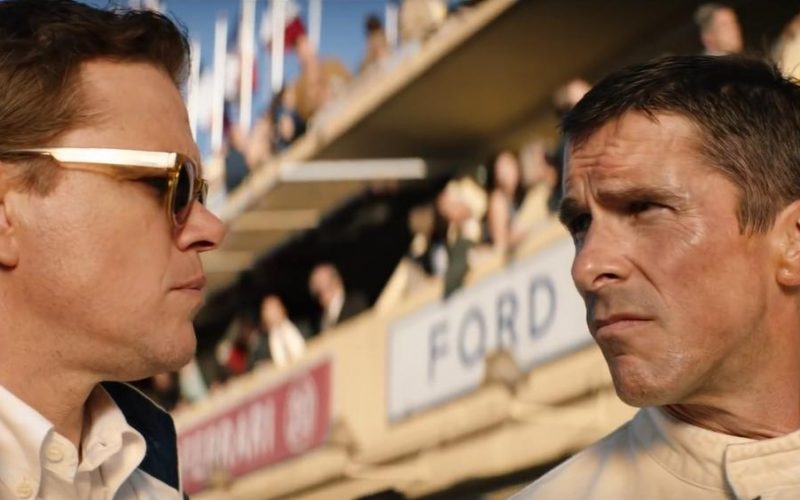 I spent just over half of Ford v Ferrari comparing the film to the inferior, cliché-ridden version of itself that I assumed going in that it would be. Eventually, I stopped being surprised and just held on for the ride. It is the rare sports/competition film that is about something more/other than the competition itself, and if doesn’t quite know when to quit, well…that’s sort of appropriate isn’t it?

The story revolves around the team of Caroll Shelby (Matt Damon) and Ken Miles (Christian Bale). As the film opens, Shelby, the only American to have ever won the 24 hours at Le Mans, is hired by the Lee Iacocca to design and build a Ford race car that will beat the seemingly invincible Ferrari cars and drivers.Henry Ford II’s motivation for all this is clear enough: Ferrari insulted him when Iacocca tried to buy his company for Ford. Iaccoca’s motivation is also reasonably clear. He wants to appease his boss and keep his job. The motivations of our good-ole-boys are a bit more opaque. I first got an inclination that this film wasn’t going to hit only the obvious beats in a scene in which Shelby, announcing Ford’s entry into the racing business, chooses to flatter Henry Ford II rather than Miles, the driver he is still trying to get to come aboard.

Once Miles does come on board, the conflict lines are seemingly more clearly drawn. It’s suits and sycophants (Leo Beebe comes across as the prototype for Aladdin‘s Iago) versus Lancelot and Galahad. Miles, who admits he is a bit of a prickly bear, really wants nothing more than to drive the perfect lap. Shelby thinks he knows how to psychologically and emotionally manipulate Ford to get what he wants.

And once those lines are drawn, it seems easy enough to connect the dots and write the second half of the film. Yet that second half has some surprises of its own. When and how Shelby makes concessions to pragmatism creates layers of tension within the sides of the team rather than merely between them. The relationship between Miles and his wife (Caitriona Balfe) proves to be a little more unpredictable than the expected push and pull between restless spirit and worried anchor. (In what is probably the film’s best scene, she demands that he not lie to her about what he wants and he replies that he doesn’t “know” what he wants.)

Having managed to communicate effectively that the meaning of the race lies in more than just the final outcome, the film does lose a little bit of its nerve and doesn’t trust the audience to understand what it just saw. Motives must be explained, codas uttered, significance affirmed. That’s a shame, because right up to the end, the film is lapping the field and then it sort of coasts to the end rather than finishing strong. That couldn’t be an instance of structure mirroring content, could it? Probably not. Yet the fact that I even stop to consider it suggests we’re dealing with slightly more ambitious material than your typical underdog sports flick.

I will probably get a few digs from my friends for insisting that Ford v. Ferrari is not only entertaining but also smart. My reason for saying that is that there were times in the film where I didn’t just not know what was going to happen, I also didn’t know what I wanted to happen. Actions and reactions force us to reassess what is at stake. When, late in the film, Enzo Ferrari gives Ken Miles a respectful wave, I wondered if there is any correlation in the modern world between victory and worthiness or anything, as Shelby asks at one point, that money can’t buy.

I think there is, but I also think it is to the movie’s credit that it leaves the answer to that question in doubt all the way to the finish line.