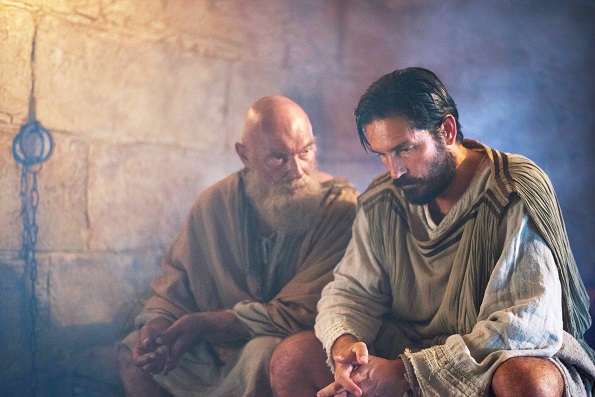 I’ve seen a lot of bad Christian movies in my career, so I tend to approach new ones with a healthy dose of skepticism. I’m always pleasantly surprised when a film by or marketed for Christians manages to exceed my expectations. Paul, Apostle of Christ is one such film.

As I’ve tried to explain at length elsewhere, even the simple labels of “good” or “bad” can have skewed connotations when discussing Christian art. “Good” can be a formal judgment describing the artistic quality of the production and the skillfulness with which it is made. “Good” can also be a moral judgment–a comment about the perceived orthodoxy of a film’s message or agreement with the cultural work it is doing. Paul, Apostle of Christ strikes me as good in both ways, or, at least, a cut above other Christian films.

The photography isn’t that much different from similar productions. There’s an over-reliance on low-key lighting to make shadows and hide the artificial nature of sets. But the direction is solid, with competent (albeit unremarkable) angles and mise-en-scene to vary the often static nature of a very talky film. What is above average is the writing and acting. James Faulkner represents Paul as someone who is subdued by his physical hardships but hardly broken. Jim Cavaziel is an A-list actor in a supporting role (as Luke), something you rarely see in Christian productions.

By not focusing exclusively or even primarily on Paul’s conversion, the film manages to tell a less well-known chapter of Paul’s biography. I’ve heard some early buzz complain that Paul is represented as doubting, but I certainly didn’t get that vibe. The persecuted Christians of Rome look to Paul for certainty and assurance, and it is true that he declines to tell them whether they should remain in Rome or flee to Ephesus. Perhaps that is inconsistent with Paul as he is conceived of by some viewers. But it doesn’t strike me as psychologically implausible. Luke is similarly shaken by the rise of evil. “Can everyone here be trusted?” he asks Aquila upon entering Rome. “This cell makes no sense to me,” he tells Paul.

By focusing on a period of Christian persecution, the film invites, practically demands, comparison to the Christian film franchise that plays on contemporary Christian fears of persecution: God’s Not Dead. There is a great book yet to be written about the persecution complex of late twentieth-century American Christians. Why does one of the most influential (and hence solicited) voting blocs in one of the most powerful nations in the history of the world continue to conceive of itself primarily as a persecuted minority? The cultural work of Paul, Apostle of Christ is welcome if for no other reason than that it underscores the very real differences between being martyred for your faith as a political scapegoat and being expected to listen to a teacher talk about other worldviews in an Intro to Philosophy course. “We were Romans before we were Christians,” says one woman when the community debates fleeing Rome for Ephesus. “This is our home.” A part of what elevates the writing of Paul, Apostle of Christ is that it isn’t satisfied to make the film about the mechanics of fleeing persecution — it allows its characters to wrestle with the spiritual implications of why it is happening in the first place.

The moral excellence of the Christian religion is not illustrated by God’s providential favor for Christians but by his representatives trying imperfectly to enact his teachings. That’s highlighted through an admittedly conventional but still plausible subplot of a Roman with a sick daughter afraid of offending his gods by asking the Christian god (or the Christian physician, Luke) for help. When the film slides towards rhetorical debate it falls a bit flat. “Men do not die for things they doubt,” sounds a bit more like something a twentieth-century apologist would say about Luke and Paul than something they would say to convince a Romaabout themselves. Plus, it’s ultimately not the sincerity of these men’s beliefs that is at issue. Lots of people sincerely believe things and are sincerely wrong. But Luke and Paul definitely have no reason to risk their own lives to help Mauritius. Maybe the films should say, “Most men to not risk death for people they doubt.”

How many American Christians who fancy themselves persecuted by a secular government or representatives of a power that prays to a different God would put their lives in the hands of a Congressman or Senator in order to save a child? Heck, how many Christians who believe themselves persecuted today really believe that those who persecute them are worth even trying to save? The thing I liked about the cultural work of Paul, Apostle of Christ, the thing I thought made if good was its humility in the face of that persecution.

Much is made of the fact not just that the pre-converted Paul persecuted Christians but that he was convinced he did so out of love for God. Maybe, just maybe, the film is suggesting that those looking for typological comparisons between today’s American church and the first-century church should stop asking themselves if they are more like Paul or Mauritius and start asking itself if it is more like Paul or Saul. Do we persecute others out of a belief in our own righteousness, seeking self-protection in power, or do we try to show the love of Christ to those whom we sincerely (perhaps even accurately) believe have persecuted us?