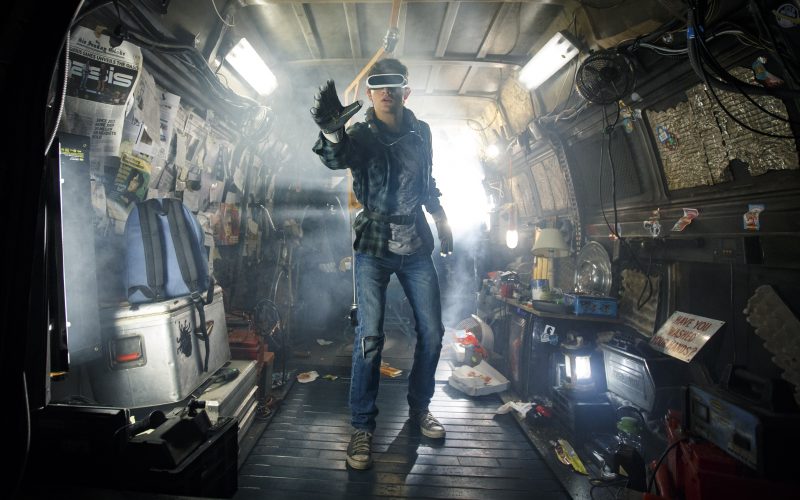 “This is not a film that we made here, I promise you. This is a movie.”

So said Steven Spielberg in introducing Ready Player One to a rabidly enthusiastic crowd at the world premiere at the 2018 SXSW Film Festival. Such statements are as much fan service as they are declarations of auteurial intent, but so what? Spielberg is just about the only one working today capable of making it without sounding defensive. Just to make sure the audience that had waited in line for three hours because he was one of them knew he was one of them, he also assured them that he loved the book and was himself a video game player going all the way back to the earliest consoles of Pong.

I  also had an Atari 2600 and love 80s movies, so Ready Player One is a bit like catnip laced cocaine sprinkled atop crack filled Girl Scout Cookies. You probably can’t live on it. It may even kill you. But it will be worth it.

Wade Watts lives in the “Stacks,” a sort of skyscraper trailer park in dystopic Columbus, where people “have given up trying to solve problems and just hope to outlive them.” The inventor of the Oasis, a virtual reality network, has died and left clues for how to find three keys that will grant the winner fame, fortune, and the rights to own the Oasis. Wade’s avatar when he is in the Oasis is Parzival. Spielberg gave an impassioned plea against spoilers, but really isn’t that name itself all you really need to know about how the quest will end?

There is, of course, an entire team of corporate henchman putting massive resources into winning the game. Their methods include funding massive numbers of contract players within the Oasis and trying to eliminate successful players by finding their real-life identities and destroying them in the “real” world.

Ready Player One is massively entertaining, made with an ease of craftsmanship too often missing from spectacle films. Sure, it is a giant kiss to overgrown adolescent males, but so too is most of our popular culture. The introduction describes the Oasis as a place only limited by one’s imagination. That the film suggests the limits of our limitless imagination are the movies we love — you can climb Mount Everest with Batman! — ought to be more disturbing. Who doesn’t want a world inhabited by just the things we love and only the stories we are already invested in? Like a Marty McFly’s animated DeLorean, the film breezes along propelled by joy of and in narratives past, never quite attaining establishing itself as their equal. (It is ironic that the film is playing at the same festival as Paul Schrader’s First Reformed, a film which prompted me to reflect on the question of whether any film so openly imitative can be called a masterpiece.) The fantasy at work here isn’t so much one of technology enabling the imagination as rendering it needless. Nothing need be imagined because everything can be made for you. The dependence on previous artifacts ought to remind us that most of us lack imagination sufficient to create something stirring. That is why we hold fast to the products of others’ imaginations that have stirred us.

The other fantasies at work here are ones that assuage the doubts and fears of those who love to game or watch movies. The time spent in the virtual world is real and meaningful and important. It is where one meets one’s true friends and expresses one’s true self. Endless hours playing Mario Kart or watching John Hughes movies will eventually save the world and get the girl.

I suspect the ridiculousness of that fantasy may alienate some reviewers, though I was not one of them. Adolescent fantasies are fine, even when held by grown-ups, so long as we identify them as such. My only real concern about the movie was the lack of weight in the proposed “real” world. At no time did the real world convey the sort of nihilism, despair, grind, or poverty that makes one empathetic to the need to escape. It shouldn’t just be that the Oasis is wonderful, it should also be that the alternatives to the Oasis are devoid of hope and meaning. In one scene we see Wade’s aunt lament that she is “working” to escape from the Stacks but her money is being all spent by her boyfriend on stuff for the Oasis. That tension is never fully explored or exploited, especially once it is understood that success in the Oasis is means of escape in the real world for the lucky few (one?) who beat the game.

All that is to say that as a cultural artifact, the film- (oops, the movie) could have benefited by being more self-aware. That it seems uninterested in its story as an allegory for the real world holds me back from admiring it. But then the characters enter into a beloved movie looking for clues, the Iron Giant comes to fight for the forces of good, the Holy Hand Grenade of Antioch is used and the fate of the universe rest on how well you know the history of video games…and I just allowed myself to be entertained.