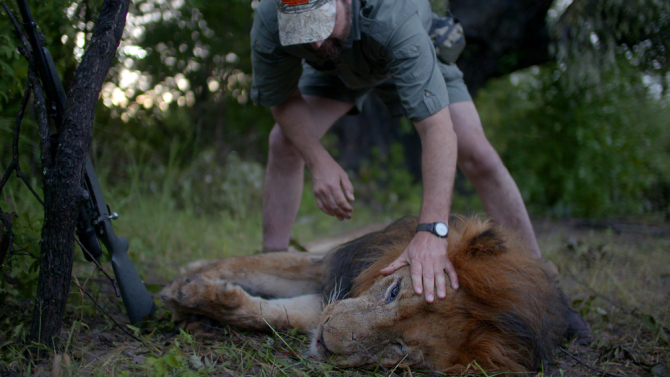 Neither does the mainstream media, for that matter. Television news needs to reduce political and social stories to three minute “segments.” Newspapers are still trying to figure out how to monetize the Internet and thus further blur the line between journalism and clickbaity gossip.

It would be overreach to claim that documentaries have an exclusive claim on informed, intelligent debate, but when was the last time you saw a news segment or read an editorial that actually changed your mind?

Christina Clusiau and Shaul Schwartz told the audience at Full Frame that filming Trophy changed their minds about a few things, particularly about whether John Hume, the South African who is trying to breed rhinos, is a “monster.”

When we first see Hume, he and his team are tranquilizing a rhino so that they can use a saw to remove its horn. The scene is viscerally disturbing, especially since Clusiau and Schwartz throw us into the action the way most social media warriors enter — steeped in disturbing images and devoid of any context.

Gradually we learn that Hume is harvesting the horns to make the rhino less desirable for poachers. Rhino horn is more valuable than heroin or gold, but while the filming was ongoing, there was a ban on selling it. Hume argues — and its hard to find fault with his logic — that the ban drives up that value making rhinos more attractive targets for poachers who will kill before they harvest. Were he allowed to sell the horns he has, he would have an incentive to keep the rhinos alive, the money to protect them, and a way to make the endangered animals less valuable to those who would kill them.

Hume’s story is mixed with that of Phillip Glass, an American hunter who pays exorbitant prices to go on safari to kill lions, and other trophy animals. Glass is a lot less sympathetic than Hume, but his story is also more complex than it initially appears. Safari hunting is a big business, and if hunters can make big money selling individual kills to people like Glass, they have the resources to continue to cultivate rare animals. People will hunt, the argument goes, and poachers will hunt animals to extinction. Safari industries have an incentive to treat animals as assets and limit the depletion of the stock.

Behind both stories are webs of interrelated issues: the relationship of America (and the rich) to Africa, the conflicting reasons people want to conserve animals, and (above all) the question of whether or not market forces or political forces are more powerful arbiters of action.

Hunting is an inflammatory topic, and Trophy balances well the need to provide visceral witness to the killing without getting so carried away by emotion that it ever stops listening. Midway through the film, there is portion dedicated to the emotional furor created by social media reactions to the killing of Cecil the lion. If, like me, you remember people posting about this incident, this segment of the documentary is extremely effective. It reminds us that if we push past the outrage we will usually find a story that is not quite as black and white as the most incensed of our neighbors would have us believe.

That’s not to say that there aren’t right and wrong answers to complex questions. Just that we are more likely to arrive at satisfactory answers if we research our topics first.