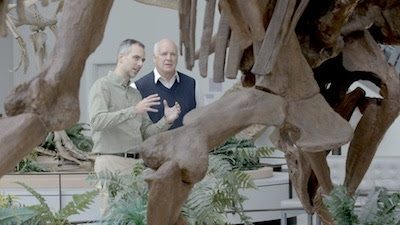 When it comes to Christian apologetics, whether in the form of documentary or literature, my first question is always the same: who is the intended audience?

There may well be researchers and philosophers who seek to persuade skeptics and deniers, but the bulk of the apologetics I’ve seen and heard in my life has been directed at those who want to believe. Not that there is anything wrong with that.

The weakness of Is Genesis History? is that it is all over the proverbial (and literal) map. Del Tackett talks geology, astronomy, computer science, marine biology, linguistics, and archaeology in his attempt to to reassure the viewers that a belief in the historicity of the first book of the Old Testament. The scattershot approach means, inevitably, that some of the answers given come across as more plausible than others. (I’m still not sure I understand the explanation of how we can see stars millions of light years away if the earth is postulated to be only a few thousand years old.)

But if the film probably wouldn’t win the kinds of debates held in scientific and academic journals, its modest strength is that it doesn’t really try to topple or falsify conventional scientific opinion. Is Genesis History? leans heavily on the idea of confirmation bias — the tendency to believe the data that supports our hypotheses and dismiss data that would challenge or complicate it. All it is really saying is that we should think for ourselves and draw our own conclusions. The notion that men of science might be as prone to confirmation bias as men of religion is not particularly scandalous. Stephen Jay Gould made roughly the same point in The Mismeasure of Man, and he was generally labelled an atheist. You will hear Tackett use the word “paradigm” a lot in the film. That word roughly means “model,” so mostly he appears to be arguing that the intertwined models of evolutionary biology, geology, and cosmology are missing some pieces and that it is reasonable to point to gaps or inconsistencies in the physical evidence when evaluating their plausibility.

Tackett is identified on The Truth Project‘s website as Senior Vice President of Focus on the Family and an instructor at that organization’s Focus Leadership Institute. His presentation is always respectful, and he wisely adopts a listening posture rather than an argumentative tone throughout the documentary. That’s unquestionably a much needed model that Christians weaned on anti-intellectual screeds like God’s Not Dead could benefit from seeing and following.

My initial question persists, though. Who is this for? Who is the audience that is going to drive to the multiplex on a Thursday night, plunk down $20, walk past the half-full Imax screens of The Lego Batman Movie and enjoy an abbreviated version of their church’s Sunday School video curriculum? Are there that many Christians who are troubled by their inability to reconcile their Christian worldview with the spirit and assumptions of the age? Or are most of the Christians who might watch this ones who are already skeptical — not just about particular scientific hypotheses but about science in general?

Given that the current American president campaigned on a promise to eliminate the Environmental Protection Agency, it appears we are in a period where Christians are less interested in reconciling faith and science as they at celebrating the former and hindering the latter. For that reason, Tackett’s project can come across, paradoxically, as both antiquated and ahead of the times. Christians have wrestled with science before. They will have to do so again. But right now, in this moment in history, the narrative of of an intellectually besieged people tentatively clinging to intellectual integrity and honest inquiry in the face of premature and overstated scientific consensus isn’t one that feels particularly timely.

Is Genesis History? plays for one night only, through Fathom Events, on February 23, 2017.