The title sequence of The Devil Wears Prada is so effortlessly composed that it comes across virtually as a dream. It’s morning in Manhattan and the legion of the city’s models rise. They dress in a beautiful catalog of lingerie, skirts and stilettos and open their cabinets full of luxury makeup and eyeliner. When they hail taxis with cutting precision, they clutch their designer purses in their other arms. All of this opening scene takes place to the sound of KT Tunstall’s 2005 pop hit, “Suddenly I See,” which is perhaps a little too on the mark. We hear lyrics like, “She’s a beautiful girl / and everything around her is a silver pool of light,” and “Suddenly I see / This is what I want to be,” and we can’t help but wonder if The Devil Wears Prada will be simply 109 minutes of glorifying the fashion industry.

Unfortunately, ten years after its release and a childhood spent with only positive things to say about the film, I’ve soured on The Devil Wears Prada. And perhaps it was inevitable. Like the industry it spoofs, the film is full of surface, sensual pleasures. Listen half attentively, glance superficially, and it is easy to float on, enjoying the peppy music, skinny models, and clever dialogue. In addition to “Suddenly I See,” we do experience the hum of working to Moby’s “Beautiful” and gaze at the spectacular landmarks of Paris to U2’s “City of Blinding Lights.” But this is an appetizer without the main course.

My reaction is in part a product of my minimal interest in the fashion industry, lack of particular affection for Meryl Streep or Anne Hathaway, and inability to generate much sympathy for these characters. I have come to realize that although The Devil Wears Prada is never anything but aesthetically pleasing, it’s too beautiful a film. In the midst of office squabbles and runway shows, it reveals itself as a Rorschach test for the materialism at the core of American life and society. Perhaps, like me, watching The Devil Wears Prada after the financial crisis will leave you with the urge to jack up taxes on the rich and vote for Bernie Sanders. 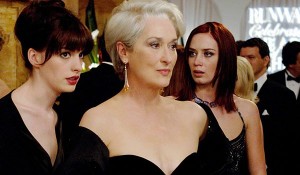 An adaptation of Lauren Weisberger’s 2003 novel, the film pits a young, Northeastern grad, Andy Sachs (Anne Hathaway) against a domineering fashion magazine editor, Miranda Priestly (Meryl Streep). Despite no knowledge of the industry and an awkward interview, Andy gets a job as a second assistant. First assistant and resident mean girl Emily (Emily Blunt) shows her the ropes. Soon, Andy is weighed down by Miranda’s coats, Starbucks runs and other petty tasks. At one point, Miranda threatens to fire Andy unless she gets her daughters the unpublished manuscripts of the last Harry Potter book. Andy manages to pull this off with the timely assistance of a writer, Christian Thompson, who quickly seduces her.

At home, Andy’s life is a mess. Her boyfriend, Nate, breaks up with her and she blows off her longtime friends. When her father visits her, she gets distracted by a distressed phone call from Miranda, stranded by a hurricane in Florida. Her closest connection becomes the magazine’s art director, Nigel (Stanley Tucci), who trades Andy’s plain, boring clothes for designer wear. Gaining the trust of Miranda, Andy eventually surpasses Emily. As a reward for her talents, Andy earns a trip to Fashion Week in Paris, where she ultimately grows disillusioned with the backstabbing of her job. In the film’s triumphant moment, she then ditches Miranda and throws her phone in a fountain.

One problem of The Devil Wears Prada is that the film doesn’t work as a comedy or a satire. There are amusing jokes of the harmless, rom-com variety, but director David Frankel is too enticed by the fashion world to skewer it for laughs. In reality, Andy is a convert to the beauty standards and values of the fashion industry; she loses weight and seems to abandon her dreams of becoming a journalist at least until the end, where she interviews for a reporter job. When Andy stuns her co-workers by arriving in dazzling new clothes, it seems to suggest you can become a new person by wearing a new outfit. That’s a troubling message of vanity.

And what of the message The Devils Wears Prada sends to young girls? Almost everyone in the film, male or female, is good-looking, attractive and well-off. The movie fat shames by having Andy mocked for being a size six on the way to being a size four. Emily, an anorexic, proudly boasts that she hasn’t eaten anything all day. That’s a dangerous line to promote to the many women and girls who feel bad about their weight and physical appearance. Another false ring of the movie is that Andy is forced to change her looks because she dons flannel sweaters and flat shoes. But who cares! Anne Hathaway appeared on People’s 50 Most Beautiful People list in 2006 and looks pretty good wearing anything. Therefore, a choice between Hathaway’s Andy and the alluring fashion world is really no choice at all.

It is interesting, however, to compare the world The Devil Wears Prada shows in the mid 2000s to the present day. I wonder how the rise of social media and the deterioration of print publishing might have added complications to the plot. How have smartphones changed the office world environment? Although the young professionals of the film can’t be that well-off, there is little discussion in the film of expenses, costs and salaries. The economic devastation about to be unleashed by Wall Street, situated just a few miles away, would give even the most narcissistic models pause to think of their economic security. Would The Devil Wears Prada, set in 2010, strike a different tone?

Indeed, in the last decade, it’s become harder and harder to watch any film that panders to the wealthy and powerful. Why doesn’t anyone in the movie feel grateful or humble to receive the good fortune of privilege, to bask in celebrity each day? For all the women who dream of working in the fashion industry, The Devils Wears Prada may be enticing. But the film is vapid and empty beneath its Louis Vuitton coats. The rest of us might as well stick to wearing rubber Crocs and whichever t-shirts we can find. That style is easier, less expensive and more authentic. Wear it well.