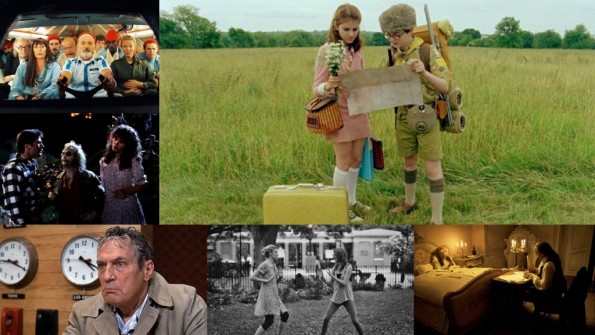 When Ken asked me to participate in compiling five “Feel Better” movies, I initially planned to balance my selection among different types of films, but then I realized the films that really help me feel better in dark times are offbeat comedies and tragic cautionary tales. In the interest of some diversity I did select four comedies that are all quite different (satire, screwball, comedy-drama, and something that defies description), which left me a final space for a tragic cautionary tale that I find strangely uplifting.

Before I begin the list, I need to mention that the news is constant reminder of the darkness in the world. Hardly a day goes by when we don’t see a story about a school shooting, a terrorist bombing, police brutality, a massively offensive and/or idiotic statement from someone who wishes to be the leader of the United States, increasingly nasty intolerance from anyone caught up in a political debate, etc. What the news rarely reports is a story of a politician reminding his audience of everyone’s dignity and humanity, a police officer doing his job properly and defending someone, a gun owner who decides there are too many guns in the world and chooses to give up his guns, Muslims, Christians, and Jews forming friendships and alliances with one another. These are the types of stories that make the world a better place, and they all too often get buried under the mantra of “if it bleeds, it leads.”

It’s certainly normal to be upset at the horror which permeates the world, and if we’re not angered by such appalling actions, then we’ve lost our sense of justice. However, it is also important to remember that tragic news story after tragic news story is not the only thing happening in the world, which brings me to the first film on this list, the newsroom satire of them all. 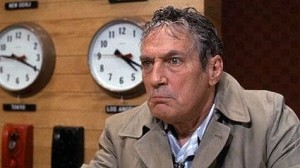 Going over to a window, opening it, leaning out and yelling, “I’m mad as hell and not gonna take this anymore!” can certainly feel cathartic. However, in doing so, we’re playing directly into the mentality of fear that keeps us hooked on the depressing cycle of news. When longtime news anchor Howard Beale (Peter Finch) is told he’s being laid off, he snaps, and announces that in one week, he’s going to blow his brains out on the air. And the network’s ratings skyrocket, prompting Faye Dunaway’s ruthless executive to exploit the mentally sick man for profit, as the public eats up his fear mongering ramblings, eager to know what he’s going to do next.

The dark satire highlights the outrageous nature of the news cycle, its selective reporting, and the public’s consumption of it. Whenever someone references a couple of depressing news reports as if they are the only things happening in the world, I want to reply: watch Network and write three essays, the first on how the news media exploits the fear and anger of its audience, the second on how the media exploits its own employees, and the third on how focusing on blood, devastation, death, war, and horror causes us to forget that there is much goodness in the world. Network always reminds me how healthy and uplifting it is to periodically step away from the news and spend time with friends and family. 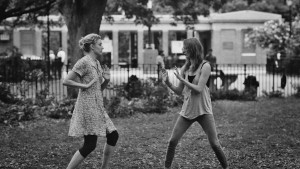 About a year ago, I watched a string of bad movies, the last of which I found so disturbing that I questioned whether I should continue developing my interest in film. Then I watched Frances Ha for the fifth or sixth time. Not only does it embody everything I love about cinema, it also portrays the world in a perpetually hopeful light. I am aware that Greta Gerwig’s performance along with her and Baumbach’s screenplay might constitute the peppy optimism which Ken said he did not want on this list, and it is certainly true that the film is infused with such an attitude. However, the film also acknowledges that peppy optimism can be tiring and annoying, and during rough times there needs to be something deeper and more substantial, which in the film is represented by Frances’ relationship with her best friend Sophie (Mickey Sumner).

I especially love the insight Gerwig provided in one of the bonus interviews: there’s nothing Frances does at the film’s end which she couldn’t have done at the beginning, but she has to become mature enough to accept those decisions to be able to make them herself. In a film about friendship and growing up, Frances Ha‘s portrayal of millennial artists and their first world struggles rings hilariously and poignantly true in every scene, providing a reminder that as distressing as mundane problems can appear to be, they will work out. 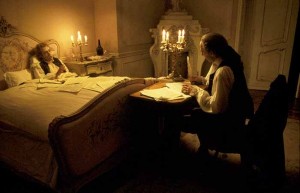 Considering this is a (largely fictitious) story about a man driven mad by jealousy and pride and how, in his attempt to destroy his rival, he only destroys himself, I doubt there are many people who would say this film makes them feel better. What I find most important to remember is the meaning of the title, or Mozart’s middle name: loved by God. That is a concept we all need to remember, and it is one which F. Murray Abraham’s Salieri painfully fails to grasp, thinking God’s love is something earned through piety, which will manifest itself through a life of success and fame. The film is a brilliant reminder that God can manifest Himself in the most unexpected ways, which are almost never what we anticipated. Watching Salieri knowingly and unrepentantly damn himself, because the vulgar Mozart is more talented than he is, makes for a terrible tragedy, but it’s a tragedy that reminds us everyone has fallen short and in their own way is a mediocrity, and when we despise them, we despise the God who made them. 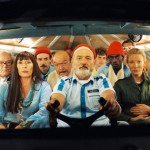 I could have just listed five Wes Anderson films, and that would not have been an inaccurate list, but these two stand out above the rest of his work in my book. Both films are about protagonists with broken families who undertake an unusual journey in the effort to find some sort of healing. The Life Aquatic is told from a parental perspective, and Moonrise Kingdom from that of children — a combination which makes for a fitting pairing. 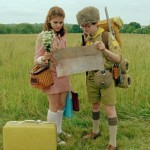 The first contains fantastic creatures, pirates, J. S. Bach, and a sentence with a triple negative. The second contains a picturesque island setting, scouting adventures, Benjamin Britten, and a brilliant musical metaphor. What both films have in common (besides Wes Anderson’s trademark quirky humor) is that they depict both a broken world and the world as it can and should be. A heartfelt love for all the characters despite their many imperfections undergirds both films, and that attitude easily affects one when watching them. 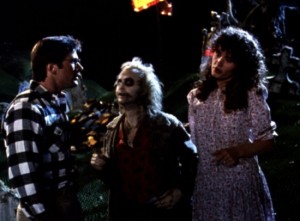 Before you write me off as completely crazy, let me explain. I’m not saying this is Tim Burton’s best film, although I think it’s one of his few films for which it is possible to make that case. I am saying there is no film that is more guaranteed to make me laugh, uplift me, and convince me to look at the world in a more optimistic, hopeful light.

The film contains some of Burton’s most delightfully perfect atmospheric set design along with some of his most endearing protagonists. Alec Baldwin and Geena Davis are a recently deceased couple who find their idyllic home being taken over by a newly moved in living couple (Catherine O’Hara and Jeffrey Jones), who are unfortunately totally unaware of their presence. Winona Ryder plays the living couple’s “strange and unusual” daughter Lydia, who feels utterly alone. As the ghost couple tries various ways to successfully haunt and reclaim their home, Lydia tries to convince her parents that their new home is haunted. At the center of these conflicts is the titular bio-exorcist (Michael Keaton), who provides a delightful dose of sinister humor to the proceedings. The film’s unusual approach to a story about adjusting to a new life ends up literally brining the natural and supernatural closer together, reminding us of the foolishness of vilifying someone over a difference of opinions. On top of that, the healthy dose of gallows humor is absolutely hilarious.