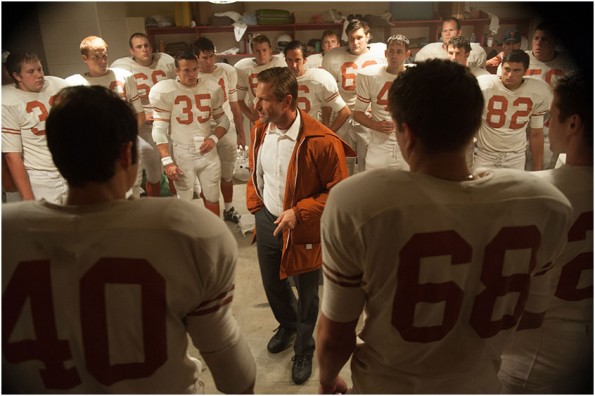 When I was a graduate school teaching assistant working off a standardized syllabus, we had to teach the “modes” in Rhetoric and Composition I (a.k.a “RhetComp”; a.k.a. “Freshman English”). The first assignment on the syllabus was a personal narrative, and it didn’t take me long to institute a prohibition against dead grandparent/parent/best friend papers. There were a lot of reasons for suggesting students steer clear of this topic, but the two most obvious were these:

I get that. I really do. I’ve experienced death and grief at an early age, and I’ve written elsewhere that it took me a long time to be able to develop the critical, emotional, and artistic vocabulary to address some of my seminal life experiences. So please believe me when I say that

Steinmark (Finn Wittrock)  is the Camille figure to coach Darrell Royal’s (Aaron Eckhart) grieving narrator. The film is framed around Royal being interviewed by a student journalist who asks him which player he’s coached made the biggest impact? Earl Campbell? Some future NFLer? No, Royal says, it was Freddie Steinmark. She protests that she’s never heard of Steinmark, and off we go….

There’s nothing really wrong with My All American (★★½). Not a blessed thing. It’s just unexceptional in every way. As a death and grief story, it may not have the reach of Brian’s Song or Love Story but only because the latter have more star power. As a “Christian” film (or one aimed at faith-audiences), it is less overtly faith-centered than Woodlawn but highlights its characters’ religion more than The Blind Side. Unless you are a fan of Notre Dame, Arkansas, or the Viet Cong, there are no villains here other than cancer.

The one place My All American flirts with being probing rather than transparent is after Freddie has been diagnosed. The doctor wants him to stay in the hospital rather than roam the sidelines of the team’s bowl game. Freddie pushes and pushes and finally gets the doctor to admit that a recovery is unlikely in any event. There’s a serious discussion to be had about quality of life and a terminal patient’s right to face death on his own terms. But if that’s the movie you want, you might as well watch How to Die in Oregon.

There is another way, besides arriving so soon on the heels of Woodlawn, that My All American suffers from bad timing. Freddie, like most athletes in general and football players in particular, puts off going to the doctor and getting his pain checked out. No, football doesn’t cause cancer, but it does contribute to the cultural norms of masculinity that make men slower to seek medical attention. Yeah, when Coach Royal frets “did I do this to you?” the literal answer is “no,” but the way the film honors Freddie most of all for playing through pain is at best problematic in a post-Head Games-NFL-concussion-lawsuit world.

But if the film is reluctant to probe or question in a way that might threaten its status as hagiography, it at least avoids the smugness of Job’s comforters. An early scene where Freddie comforts a mourner is the film’s best moment. He doesn’t claim to have all the answers. He’s willing to pray for the doubter/skeptic rather than insisting on making it an evangelistic moment. I can’t always endorse the film’s implied instructions about how to be a great football player, but I do appreciate its recognition that being a great Christian starts with simply being a decent human being.

Tags: Angelo Pizzo, My All American