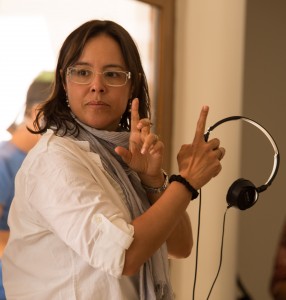 “I’ve been very lucky,” Patricia Riggen says when discussing her career as a female director, a profession historically dominated men. (The documentary Miss Representation reports that only 7% of feature films are directed by women.) She uses the words “happy” and “content” when discussing the arc of her career, which has moved her from the Spanish-language Under the Same Moon, to a Disney television musical (Lemonade Mouth), to the indie darling Girl in Progress, and finally to the director’s chair for Warner Brothers’ forthcoming disaster drama The 33.

The 33 tells the true-life story of a group of miners trapped well below the earth’s surface after the mine they are working at in Chile collapses. They have three days’ worth of food and no way to communicate with the outside world. As the Chilean government struggles in vain to locate the trapped miners, the men themselves try to keep despair at bay.

She acknowledges that because of its “subject matter,” The 33 is the sort of movie “not normally given to a woman director.” When asked to elaborate she mentioned the film’s budget, its use of CGI special effects, and its overwhelmingly male cast. Riggen chose to shoot much of The 33 in actual mines rather than building a facsimile on a sound stage. That decision meant that for large chunks of the film’s production–“35 days, six days a week”–she and the cast were filming underground with bad air, cramped conditions, and lack of facilities casts and crews might be accustomed to having on large movies.

I asked Riggen if she felt she was challenged by casts or crews more frequently than her male counterparts. She said “yes.” Even on this movie? Again, she affirmed “yes.”

“I had to fight a lot,” Riggen says of her time on a set. Typically people on a set will challenge her early to see if she will back down. Eventually, if she stays firm, people on the set settle down and begin to accept her authority. But even for an experienced female director, deference isn’t always a matter of course. It has to be earned on each new set. “We [female directors] have to do a double job,” she suggests.

That Riggen faced these challenges makes her work on The 33 all the more remarkable. (My full review of the film will appear at Christianity Today Movies & TV on Thursday.)  As well as the challenge of a physically demanding shoot, Riggen had to create “three distinct worlds”: the underground world of the miners, the world of the camp outside the mine where relatives wait fearfully for news of their loved ones, and the world of the government officials who had to try to marshall the resources to attempt a miraculous rescue.  Adding to the logistical challenge of directing the film was the fact that once the mine collapses, the miners are more or less confined to a single location, making it hard to keep the film visually dynamic.

Riggen says she story boarded the mine scenes “as much as I could” but her choice to film on location meant that she couldn’t know too far in advance how much space, light, and movement could be factored into any one shot. The act of making the story boards was more of an exercise to help her visualize the scenes, and she had to be willing to improvise or move away from her original plan as circumstances dictated.

The 33 is a surprisingly engaging film, and it’s success is due in large part to Riggen’s direction. As we approach the end of the film year, it’s worth repeating one of my standard complaints about film awards given out by critics’ groups. When we only see the final product, it can be hard to determine how much of a film’s success should be attributed to its individual participants. If a film looks good, was the director leading the cinematographer or saved by a clever editor? Was a powerful performance the product of an above-average screenplay, a director’s wise choice of which take to use, or an actor’s ability to transform generic material into something special?

Ultimately–rightly or wrongly–we buy into auteur theory. The director is held responsible for coordinating the workers and keeping the film on track. The director also makes key decisions, such as the location shoot, which end up influencing every other area of the production. A different director and The 33 could easily have looked and felt like a television movie populated by immaculate actors in sooty make up. In this film, these men look like they have been underground for weeks in large part because the actors have spent significant time in an environment approximating that faced by the characters they play in the film.

Riggen may feel lucky to be given the movie, but from my vantage point the movie was lucky to have her. Next up for the director? Miracles from Heaven with Jennifer Garner is already in post-production. If Riggen’s work there is as good as it is on The 33, perhaps studios will stop asking if women directors can make movies and start asking if they are available.