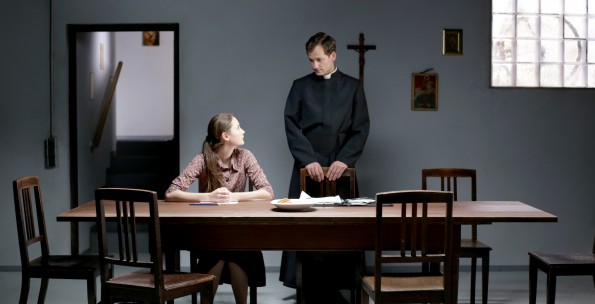 This nuanced and relentless psychological drama draws parallels between the passion of Jesus Christ (hence the title) and the struggles of a teen girl to understand and appropriate the intractable religious teachings of the adults in her life. It is at turns horrifying and inspiring.

The thing that elevates it for me is that while it takes on a point of view (one that is clarified for me in the final scene), it doesn’t descend into parody or ridicule. Exaggeration? Maybe. The parents, mom especially, are pretty fundamentalist (if fundamentalist Catholicism is even the right label), but it is easy enough to see that the film isn’t condemning true religion so much as  fanatical misappropriations of it.

And yet…starting in the very first scene, the line between genuine, helpful, instructive doctrinal teaching and misapplied brainwashing is very, very skillfully blurred. If the film does nothing else, it reminds us of how vulnerably thin and uncertain that line is. Hence the “terrifying.” Because it may appear that the only way to avoid being on the wrong side of it is to eschew religion altogether, and that’s as unhelpful an answer as saying that you are right and anyone who tries to reason with you is the devil.

That first scene takes place in Maria’s (Lea van Acken) confirmation class. Her priest calmly but persistently catechizes the class, at times asking Maria to give others a chance to answer. Life begins at conception but spiritual life begins at baptism. What are the sacraments of the Roman Catholic Church? Young people are presented with temptations and distractions that threaten to keep them from being pure. Even a young person can be a spiritual warrior.

The priest admonishes: “When the final judgment comes, Jesus will ask us how many souls we saved” and “whether that number could have been more.”  When the question is posed why children must enter the battle, Maria righteously parrots: “most so called Catholics attend modern mass.” The workers are indeed few.

The opening station really is a tour-de-force of writing and mise-en-scene. (Each scene is a single shot take, with very little camera movement.) Maria’s teachings make sense in the static confines of her confirmation class or when she is scrupulously led through confession. But when she tries to live our her faith, the world seems a little less black and white. When a schoolmate asks why Maria’s church doesn’t allow females to serve in the service she repeats her teaching that girls could be a distraction to male parishioners. “But couldn’t boys be a distraction, too, if women look at them?” he asks. Maria refuses to run in gym class until her teacher turns off the Satanic music with its ungodly rhythms.(I think it was Roxette’s “The Look.”) Her intractable stance makes most of the other kids mock and hate her. Even her own mom berates her for the smallest imperfection, yelling at her for not smiling in a family portrait even after Maria alone has soothed her autistic brother.

There have been plenty of depictions of suffocating and austere religious communities. What elevates the best of them is when there is a complementary vision of a higher way. Although I valued Stations of the Cross (★★★★½) highly, I couldn’t give the extra half star because in some of the best films (like Ordet, Babbette’s  Feast, or A Man for All Seasons) there is usually a glimpse of “true” religion, and I’m not sure I saw it here. Seeing the tragic parts of the story is easy enough, but is religious life only tragedy? Recently on American television the trend has been to show Atheist parents befuddled by their children’s faith. (Think The Good Wife and The Americans.) Such depictions are perhaps unavoidably patronizing, since the line between child-like and childish has always been hard to negotiate. Maria may very well be a saint, but has anyone ever been bullied into holiness? And if she is the depiction of pure innocence, why do we long for her to break away?

Maria is shown as sincere here, but is she a saint as her mother insists, or a pitiable victim? The film’s final scene, I would argue, leans towards the latter, as the camera finally pans, situating Maria’s fate as part of a broader history that will be replicated. But don’t look away too quickly, because while the camera pans sideways, it also moves our gaze up. The last station of the cross is not the end of the gospel story, and Maria may have a heavenly parent who is not quite so impossible to please.

Stations of the Cross is available on DVD from Film Movement.