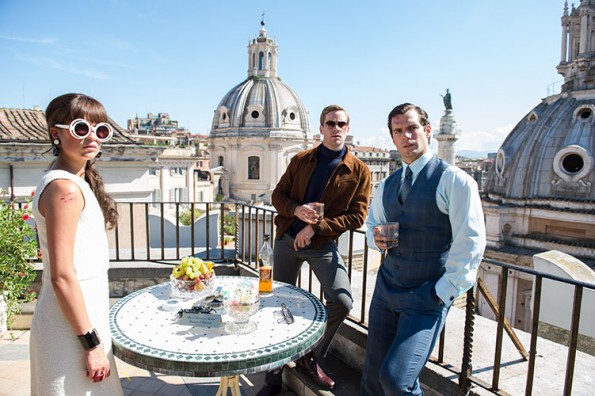 The Man From U.N.C.L.E. was, for me, the epitome of a 3 star movie: it did what it did pretty well, but what it did was not earth-shattering. Some imperfections keep it from getting that extra “1/2” but a 3 star movie is worth seeing. As a youngin’, I am not familiar with the show the movie is based on, but if the spirit of the show was to be a fun romp with good strong characters, then this film certainly succeeds in carrying that torch. It’s a solid action flick that had a few quirks thanks to the director, Guy Ritchie.

Now, there are Guy Ritchie movies and there are Guy Ritchie movies. He’s got such a strong style, especially in his early films (Lock, Stock and Two Smoking Barrels, Snatch), but he toned it down significantly for the Sherlock Holmes films. In U.N.C.L.E, however, Ritchie seems to let himself go just a little and allow some of his nuances to sneak in. For example, there was one scene where we are introduced to a character by his legendary title, then shown through a narrated montage all the things he has done to earn this title.

While it may not have all the “isms” that Ritchie is known for, U.N.C.L.E does have a specific aesthetic. The colors of clothing pop, style is cohesively 60s and the whole film has a well-balanced graininess. I do have to knock the CG: it was bad. Like, 1999 wants their effects team back. The full CG sequences were cringy, but there were only a few of them. The rest of the stunts looked and felt good, which is why the full CG sequences stood out. I’ve heard it said that the reason we think CG is ruining movies is because we only notice bad CG and the good stuff flies under the radar. Well. I noticed it. It contrasted with the rest of the film.

Story wise, the film begins predictably enough: CIA agent Napoleon Solo is tasked with helping a young woman Gaby (Alicia Vikander) across the Berlin wall to find her ex-Nazi father to prevent him from aiding a terrorist group. Forced to partner together, the KGB’s finest IIlya Kuryakin (Armie Hammer), Solo and Gaby must race to stop the construction of a nuclear bomb. Stereotypical but entertaining twists abound and we are left with a set up for a sequel.

Time and time again, what draws me into a movie and what I can really talk about, is the performances of the actors. I appreciate the elements of cinematography, script-writing and directing, but it’s the job of the actors to convince me that the story onscreen is something worth seeing. In this flick, the performances ranged from distracting to exceptional. 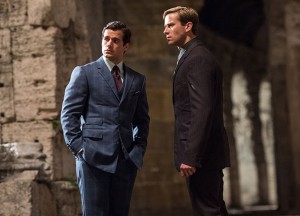 On one end, we have Alicia Vikander who plays East Berlin mechanic Gaby. Her character portrayal was spot-on, a wonderful blend of attitude and silliness and she was able to walk the line of being sensitive and confident, but…to say her accent was inconsistent would be a nicety. It started out strong, then faded to almost non-existent, then came back in full force, then dropped back out to obscurity. If they had written in somewhere that she was raised by American parents or given the character any excuse to have a sassy American voice I would have gladly accepted it, but as it stands, her accent was a huge distraction from an otherwise very solid performance.

On the other end of the acting spectrum, we have Armie Hammer as the KGB agen IIIya Kuryakin. Hammer is mostly associated with The Lone Ranger, but he seems to have completely brushed off that train-wreck (Get it? Cause in that movie there was a train? And it wrecked? And also the movie wasn’t great?). Hammer flawlessly executed his thick Russian accent and maintained a certain dignity with his speech that could’ve been thrown out the window in favor of cheap humor. Hammer’s performance made me realize that he is capable of a great range, and this film allowed him to explore it. He sold the action, timed the comedy well and his character’s internal motivations were wordlessly but clearly presented. All around exceptional performance.

Right in the middle of the performance pendulum, we have Henry Cavill whom I previously thought was born to play Superman, but I was wrong. This was the part he was born to play: Napoleon solo, CIA agent with the swagger of 10 James Bonds. In a way, this is the Bond film Cavill never got to make. He was in the running for Bond in Casino Royale when the studio decided to go with Daniel Craig. Had Cavill gotten the part, we would’ve seen a Connery successor and now we see it here. Cavill did a fine job with a small-ranged part. His character was not deeply written, but fleshed out enough for him to have some fun quipping. Solo is essentially a comedic, American James Bond.

As I said before, the flick is a 3 star movie, well done and satisfyingly predictable, no boat-rocking or revolutionary storytelling, just good solid comedy-action fun. Hammer and Cavill have good comedic chemistry, Ritchie is great at directing chase-sequences, so what is the difference between 3 and 3 1/2 stars? Well dear reader who clearly cares about my opinion, to me the difference is whether something is a movie that I stream on Netflix for a nice popcorn night or one that I text my friends about and tell them to go see in theaters.