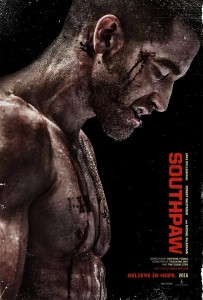 Southpaw has all the trappings of a good movie. With a moving story, compelling performances, and well-handled clichés, the movie turned into something great.

Sports movies are often misbalanced, and boxing movies in particular are guilty of scripts that are essentially, “we need a story so the character can box” rather than “this story revolves around a character who boxes.” Fortunately, Southpaw is the latter.

The movie does a great job of showing and not simply telling.  The film starts in the locker room just before Billy Hope fights to defend his title against another boxer. We are introduced to his wife Maureen (Rachel McAdams) and even in a small interchange, we see the strength of their relationship. After the fight, his wife tells him she wants him to take a break from boxing for his health, the movie thankfully avoids the stereotypical “I’m a fighter woman, I gotta do what I gotta do cause I’m a man and stuff” and instead, Billy actually listens to his wife.

As the trailers indicated, rival boxer Ramone wants a match with Billy and starts harassing him after a public appearance. The rival threatens Billy’s wife, and so a scuffle ensues. Both Billy and the bad guy’s security details pull out guns and…

This is the point of the film when the real plot begins: distraught with guilt, Billy starts spiraling out of control. He loses his title in his next fight and starts losing all of his money. Eventually, child services get involved and they decide to take away custody of his daughter. They repossess his house and his cars. Jobless and homeless, he finds his way to a cheap dirty gym.

Now, when I was watching the movie, I rolled my eyes a wee bit here. Up to this point, the film was good, even great but I couldn’t help but think “well. Now it’s a boxing movie.” And truth be told, it is. He trains, fights, and wins. No one would ever expect something different. While the structure is predictable, the film handled it just about perfectly.  All the pieces of a cliché boxing movie are there, but at every turn, these pieces are balanced. We have the motivation for the main character to fight, but instead of being just so he can win, he’s fighting because he needs money. We have a crotchety old trainer in Forest Whitaker, but instead of simply being a 2-deminsional motivational speaker, his character actually has motivation and purpose and depth.

My absolute favorite aspect of the movie was the training montage. This is probably the biggest cliché in boxing movies and it’s the part that the film handled the best. Instead of the training being about just getting stronger, or digging deeper, or overcoming all odds, the training was about making Billy a better boxer. I think this small detail is absolutely brilliant: they made Billy a bad boxer.  In the first fight of the movie, we see it: he blocks punches with his face, but wins by just being stronger.

The last piece of the cliché puzzle is the big final fight between Billy and Ramone, and again, the film handles it wonderfully. Billy listens to his trainer, boxes defensively, and remains in control. The final fight is actually sort of underwhelming, and emotionally unsatisfying…which is brilliant, because that’s not what the movie is about. The emotional climax and ultimate victory for Billy Hope is his daughter clutching him around the neck. It’s a truly moving moment, and a testament to film’s great storytelling that a movie about a boxer makes the big final fight second fiddle to the story of a man and his daughter. All the pieces of a cliché boxing movie are there, but at every turn, these pieces are balanced.

Every other piece of the film from the cinematography to the boxing choreography was gripping and well done…but what sticks out to me more than anything else is Jake Gyllenhaal. He shares a characteristic with Christian Bale: they both have this ability to simultaneously disappear into their roles and still be recognizable. Gyllenhall has wowed me before, but his performance in this film was breathtaking. I have a small philosophy when it comes to acting performances: a good actor will convey every small nuance and detail of an emotion to an audience, but a great actor makes the audience feel those emotions. Gyllenhaal did just that for me.

Gyllenhall’s performance is not the only one worth mentioning. I have never been a huge Rachel McAdams fan, but this film turned me into a believer. She had wonderful chemistry with Gyllenhaal and believable, fantastic delivery of a great script. Oona Laurence (who plays Billy’s daughter) also gave an incredible performance and I hope she will be a presence in many more films to come. It seems as though I’m only giving lip-service to these other actors and gushing over Gyllenhaal, and I guess this is true. I was expecting a great performance out of him, but I was not expecting to be blown completely away. I personally expect he’s going to get some Oscar buzz in the near future.

I should say that one of the reasons I rated this movie so high is that it did all the things I expected it to do, and did them very well. It was gripping, emotionally weighty and violent. Audiences expecting another Rocky installment will be disappointed, but I was very impressed.

One last thing…can someone please tell me Jake Gyllenhaal’s ab routine? Because seriously, I had to hit the gym after this movie.