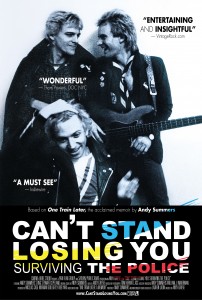 1More Film Blog is pleased to partner with Cinema Libre Studios to give away a free CD signed by rock legend Andy Summers. Every Breath You Take: The Classics features fourteen cuts by the iconic trio, The Police.

The studio is celebrating the DVD release of Can’t Stand Losing You: Surviving the Police, which arrives July 14th. Based on Andy Summers’ memoir, One Train Later, the documentary recounts the band’s rise to stardom and provides an inside look at preparations for its 2007 reunion tour.

An absolute treat for fans of The Police, the documentary relies on Summers’ personal reflections to provide an intimate portrait of how the band came together, was driven apart, and–twenty years later–went on tour once again. As the subtitle suggests, things weren’t always smooth sailing with the band, but you’ll have to check out the documentary to hear Summers explain why.

To enter the drawing, simply leave a comment below with your favorite Police single. I will pick a winner at random from all entrants on July 14th, and Cinema Libre will mail you the signed CD for your collection. Only one winner per household, so you if you’ve entered a similar drawing at another site, you can’t win both. Also, we can only mail to the United States or Canada.

Andy Summers says this is his favorite Police song…because of the guitar part! What’s yours?