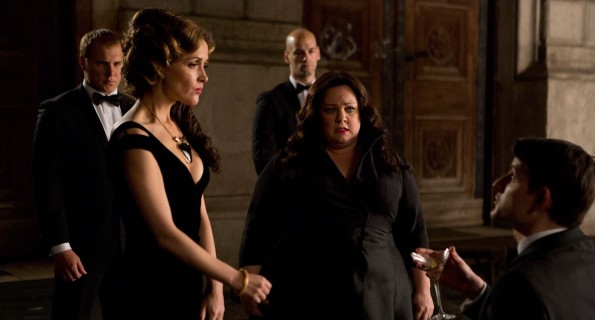 When I first saw previews for Spy, I groaned a mighty groan. I’ve seen it many times before: here was yet another unfunny, predictable, jokeless comedy with an unattractive female lead who discovers that through confidence and a makeover, she can be just as successful as the beautiful people she’s been jealous of her whole life. Stylistically, I predicted,  the film will try to be a thrilling action movie and a heartening comedy, but will focus too much on the action (which will fall flat) and fail to make any jokes in the process, ultimately failing as both an action and a comedy. Ugh.

Here’s the twist: Spy was funny. And exciting. And dare I say, entertaining.

I went into this movie with expectations, very negative expectations. I’m pretty good at predicting when a movie will be bad. Spy proved me so wrong I’m going to need to revisit my prediction process.

The first 5 minutes of the film seemed to confirm my suspicion, with super spy Bradley Fine (Jude Law) infiltrating a party in a very Bond James Bond sort of fashion. I rolled my eyes, thinking that the sleek aesthetic would take the place of jokes. The first gag, however, was executed flawlessly and the movie kept them rolling.

Fine’s handler is the overweight but brilliant analyst, Susan Cooper. As Fine repeatedly says, he can’t do his job without her in the basement, keeping track of him via satellite and an earpiece. After an incredibly well executed establishing scene which actually shows Fine and Cooper’s teamwork and dynamic rather than the film simply telling us it exists, we see Fine and Cooper outside of work. She is of course enamored with Fine (because Jude Law) who predictably appreciates her but would never treat her romantically. Their dynamic is handled so well that despite it’s predictability, it was entertaining.

The main plot begins when Fine gets into a sticky situation. He tracks the daughter of a nuclear arms dealer who has taken up the family business. Suddenly, Fine disappears. The rest of the agency is compromised, meaning none of the seasoned veterans can go into the field. Cooper volunteers and is laughed at. After much convincing, she’s allowed to go into the field to observe and report on the arms dealer’s daughter and track the transaction of the nuclear bomb.

Cooper goes against her tame orders and sheds her lame cat-lady disguise in favor of a sexy gambler. I mention this scene because it was actually my favorite part of the movie: she essentially gives herself a makeover. Movie tropes tell us that every ugly girl has a beautiful princess hiding inside her waiting to be exposed by makeup and a dress. This would be the scene when suddenly Cooper is suave and sexy, but she’s not. She’s still extremely clumsy and inexperienced in the field. And it’s funny. Predictable tropes with excellent execution is persistent in the movie.

The film is an excellent vehicle for McCarthy in terms of range: she starts out as a timid analyst, awkward and clumsy (a character which McCarthy does very well). But as plot progresses Cooper is forced to improvise and change her cover into a swagger-laden mercenary hired to protect the woman she’s tracking. At this point, the film naturally allows Melissa McCarthy to start being Melissa McCarthy: clever, foul-mouthed, and in my humble opinion, hilarious.

While McCarthy’s performance is the most substantial and entertaining, I would be remiss if I didn’t mention Jason Statham. His character is an over-confident British agent who belittles Cooper at every turn, blaming her for everything that goes awry. He’s constantly bragging about ridiculous past exploits. (“This arm? This arm was completely ripped off, and then reattached by this arm.”) His extended descriptions become almost meta when you think about how many crazy action films Statham has been in. His comedic chops were quite on point, and I would love to see him in more of these types of films.

The rest of the movie unfolds predictably: cover is blown, agents we trust are corrupt, common twists abound, yet while I saw each of these twists coming, they were so well done that they were satisfying rather than tedious. When McCarthy inevitably saves the day, it’s actually believable.

There are a few additional things that stand out in this film and are worth mentioning. For one, there are jokes. There’s a few that reoccur throughout the film, like the villain’s inability to remember anyone’s name, that gives the film a comedic coherence absent from most films in this genre. McCarthy is essentially given two types of comedy to display: the timid analyst and then the foul-mouthed cover she establishes, and the writing for both sides of her character is exceptionally well done without feeling jarring.

Another plus is the action, which is usually the nail in the coffin for this sort of movie. The film miraculously finds the balance between action and comedy, providing peril and laughs at the same time. For instance, after an intense scene of infiltration with excellent choreography, Agent Fine accidently kills someone he meant to interrogate. The scene is both thrilling and hilarious, separately, but cohesively. That juxtaposition is so often hard to pull off, but this film did it effortlessly.

The last moment in the film that stood out is one that not only was handled beautifully, but also made a powerful point. There’s no transition from Cooper’s analyst position to skillful agent, and the film explains this with a conversation between Cooper and her female boss (Allison Janney). The boss reviews footage of Cooper’s training, revealing Cooper’s incredible hand-to-hand combat skills and superior firearm handling. Her boss asks Cooper why she never tried to be a field agent before, and Cooper cheerfully replies that Agent Fine always said how great she was in “the basement” being his backup and running the satellites. The boss’s reply was an angry sigh with the word “women.” Cooper was always capable of doing what she did in the film, she was just manipulated into a smaller position. It had nothing to do with her looks either. When she does make her way into the field as an agent, it did not take a make-over, or a dress, or accepting herself for who she is. It took her just getting out in the field and doing it. I appreciated that small message, not only for women in testosterone-laden fields, but for anyone who’s been held back when they were really capable of great things.