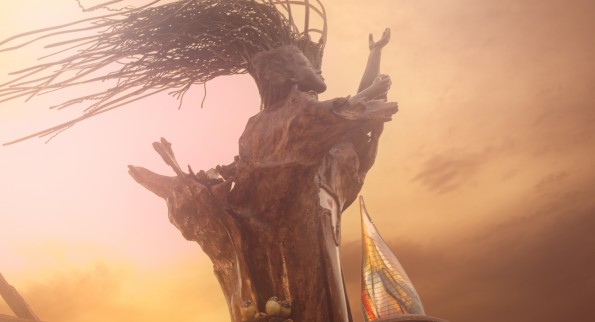 How the viewer feels about Where Was God? may depend in large part on why he is viewing it and what he hopes to get out of it.

Consisting of interwoven interviews with witnesses to and survivors of a devastating (EF5) tornado in Moore, Oklahoma, Where Was God? paints an always positive, often inspiring mural of people of faith responding to the incomprehensible. A wide array of heroism and nobility is documented. A teacher uses her body to shield a small child from the wreckage. Survivors donate goods and services to victims in shock and need. Christians talk candidly about how their faith sustained them through periods of excruciating trauma and, sometimes, horrific loss.

Such stories may well act as a palliative for those whose faith is troubled by the seemingly endless progression of death and destruction that has become part of our routine if-it-bleeds-it-leads news cycle. Ironically, the victims of Moore’s hurricane end up ministering to the audience, assuring the viewer that faith can and does withstand hardship.

That’s a positive message, and there are many Christians who no doubt benefit from hearing it. If you sense a “but” coming, here it is: when a film is titled Where Was God?, its viewers may anticipate (expect?) that it will eventually pivot form the personal to the theological. 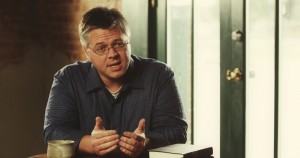 I won’t say the film sidesteps its titular question entirely. There is some profession of doubt–particularly from a young Christian woman early in the documentary–and some big picture theology. Much of the latter is interspersed throughout the narrative by commentary from Executive Producer Steven Earp. Nothing he says rings false theologically speaking, but it’s an immensely difficult task to speak in abstract theological terms in the face of immediate human suffering. That’s actually a double-bind for the Christian apologists. Remain silent in the face of imminent carnage and scoffers can claim Christianity is superficial and unequipped to intellectually or emotionally deal with tragedy. Speak out during or soon after such events and you risk being called opportunistic and exploitative. Where Was God? avoids the latter charge by keeping the focus squarely on the victims. That’s a good call, but it makes the film feel more testimonial than analytic. The personal stories are very dramatic; they stick in your head. A few days later, I am hard pressed to remember what anyone said about God. 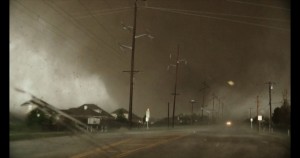 It doesn’t help the film’s balance, either, that film is such a visual media. The documenatary is professionally shot and edited, but the footage of the hurricane and its aftermath is by its very nature going to be more striking and impactful than will be sustained interior shots of talking heads. The latter are usually accompanied by a persistent and (eventually) grating score that was my biggest formal complaint about the film. The film’s participants do such a nice job of not being personally overbearing when interacting with those who have suffered and lost. Can we (the audience) not be trusted to understand their stories and feel the appropriate emotions? I suspect the score was meant to be a thread that helped transition between various interviews. But the similarity of the music over every interview, combined with the similar blocking of each interviewee, risks making these varied stories blur into one another, becoming indistinguishable. See promotional shots for examples: 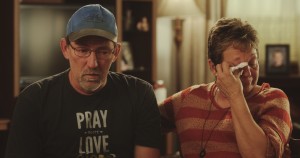 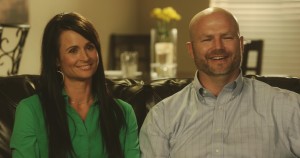 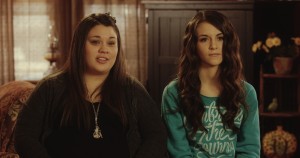 Still, nobody is lobbying for cinematography awards here. That’s not why films like this get made. The DVD will be available June 2, and while it’s not the sort of thing that one would give to the Atheist professor in God’s (Not) Dead, it could work its way into church libraries as a reminder of how to approach people in the midst of tragedy. Rule #1: let them tell their own story in their own words.

Tags: Travis Palmer, Where Was God?