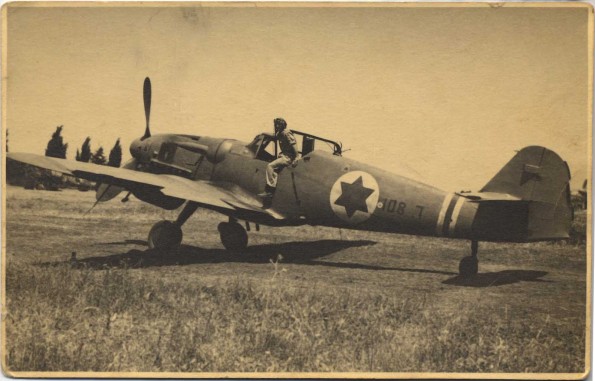 “Stan Andrews gave his life in the cause of the creation of the Jewish state.”

In an exclusive clip from the new documentary Above and Beyond, author Craig Weiss movingly reads from Andrews’s letters explaining his motivation for fighting in the 1948 war to help defend the newly created nation of Israel.

The film, which has won thirteen awards  on the festival circuit, drops on VOD April 28.

Combining interviews with survivors and archival footage and photographs, Above and Beyond chronicles the near miraculous formation of a fighting unit that, while small, was instrumental in winning  a seemingly hopeless confrontation.

Even some of the pilots themselves doubted their contributions would be enough. One reports he thought he would be back in the United States in a matter of weeks because the new Jewish state would be overrun.

As amazing as the story of the military maneuvers is, the back story of how it came to be is equally fanstastic. Al Schwimmer coordinated efforts to buy surplus planes with private dollars and smuggle them out of the United States. (President Truman had an embargo on all shipments to the Middle East.) Recruiters skimmed personnel logs for pilots with Jewish sounding names.

How to convince men, some how had just returned from one war, to volunteer for another military tour? The interviewees paint a portrait of a nation that still faced anti-Semitism. Airlines, it is claimed, would not hire Jewish pilots. Those thinking about volunteering for the war were threatened with the revocation of  citizenship. In such a climate, the flyers’ motivations had to extend beyond the political. “I didn’t understand Zionism,” say one pilot, “but I knew what they did in Europe.” Another is more blunt: “I didn’t like being a Jew.” What changed him? “Knowing what Hitler did to the Jews.”

In an interview with 1More Film Blog, producer Nancy Spielberg emphasized, though, that the film was not exclusively directed to Jewish audiences:

I really believe that this is a great American story. There were many volunteers that went over that were not Jewish. They simply felt it was the right thing to do — to help a brother in need. Isn’t that the American Spirit? Aren’t we known as the first to run to the aide of others in need? That is a universal theme that transcends religious beliefs but maybe that should be our religion: helping others.

For those who did not live through the period, some of the historical nuggets are interesting. One volunteer is from South Africa. The Israelis had one country willing to break the trade embargo and allow them to stage a landing field for planes in transport: Czechoslovakia.

And there are times where, for all its focus on the past, the film attempts to contextualize policy decisions of the present. Israel, we are told, accepted a two state solution in 1948, only to be met with an invasive war. The newly preserved Jewish state came out of the war facing a problem with Palestinian refugees that it continues to face today.

Mostly, however, this is a personal history, with men fighting unapologetically for their Jewish identity as much as for a Jewish state. Stan Andrews said:

As you know, the Jew has always been known as an intellectual, not a fighter.  A turner of cheeks, a beggar for help against oppression. Always the victim, never the victor. That can be pretty frustrating, and a hell of a label to carry around with you.

He decided to do something about that label. To hear more, check out the clip below: