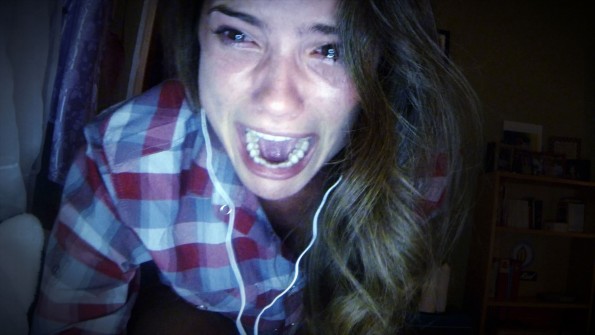 The programmer who introduced Unfriended (★★) at SXSW called it the best “all the s— happens on a screen” movie he had seen.

The gimmick of a horror movie that takes place entirely through social media interactions was innovative enough that Universal has picked up the film and set a release date even though its producer admitted to the appreciative festival audience that they are still tweaking film elements, including the story.

The film opens with Blaire and Matt video conferencing. They aren’t doing phone/Skype sex, but they seem headed in that direction. But when their session is interrupted by a conference call neither of them claim to have answered, they are not only embarrassed by their friends but also annoyed and frightened by an anonymous user masquerading as Laura Barns. Laura recently committed suicide prompted by cyber-bullying, and the fact that whoever hacked her account seems to know the secrets of each member of the group begins to play on Blaire’s superstition.

I liked the first forty-five minutes of Unfriended way more than I anticipated. Combining elements of I Know What You Did Last Summer, Scream, and The Blair Witch Project, it kept threatening to be one of those horror movies that was more about ideas than splatter effects. It didn’t hurt that I particularly liked two of the ideas most prominently floated.

Isaac Asimov originated the cliche that technology sufficiently developed is indistinguishable from magic. In the standard Hollywood drama that usually makes the computer a black box that allows anything to be possible, explained simply by labeling the magician a hacker. These young people know how to use the technology more than their parents, but their understanding of it runs only along the surface. And when technology starts acting in unexpected ways, only then do we realize how much we’ve become dependent on it.

The most interesting idea in the film though, unfortunately turns out to be a red herring. Blaire investigates an urban legendish site purporting to explain why one should not accept messages from dead people, how those dead people can possess users through the technology, and how to escape them: confess your sins. Like much of the best horror, this theme works on both the literal and symbolic level. The ease of social media allows anonymity and extrapolates the differences between our public and private selves. But as we live more and more of our lives through social media, it also makes it harder and harder to keep our private selves truly private.

If Unfriended had found some way to follow through on these themes, it might have been the rare horror film that I recommended. The back half, however, appears more interested in creative ways to eliminate some of the characters than in following through with any metaphorical or allegorical ideas.

Even though the script isn’t as tight as it needs to be, Unfriended is executed well enough to probably be entertaining for horror fans. And the filming gimmick no doubt keeps the budget low enough to make it attractive to distributors. The storytelling technique here is innovative, but the execution is a little off. Once you get past the newness of the way the story is told, the story itself still needs to be well told.

After all, when was the last time you re-watched The Blair Witch Project?