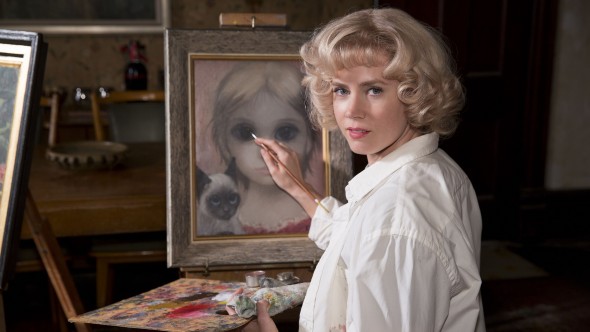 It’s a shame Errol Morris didn’t get his hands on this story first.  A true tale about a self-deluded narcissist who takes advantage of an unassertive woman’s artistic talent in bohemian 1950’s San Francisco?  This seems like perfect material for the documentarian who superbly and stealthily dissected the psyches of Robert McNamera (The Fog of War) and Joyce McKinney (Tabloid).  Sadly, this promising material was placed instead in the hands of Tim Burton, who manages to squander the bountiful assets on offer in Big Eyes.

Likewise, I was thrilled to see the names of Danny Huston, Terence Stamp, Jon Polito, and Krysten Ritter unfurl in the opening credits.  Lamentably, Burton underutilizes all of them in atrophied roles.

Next, let’s look at Burton’s narrative skills.  Big Eyes starts with some promise, with Adams’ character Margaret fleeing suburbia with her daughter Jane.  She lands in San Francisco, where she meets up with her hip friend DeeAnn (Krysten Ritter).  While paying the bills by painting Humpty Dumpties on baby cribs, Margaret spends her weekends hawking her portraits in an open-air art market.

On one such Sunday, she falls under the spell of Walter Keane (Christoph Waltz), who wows her with tales of living la vie d’un artiste on Paris’ Left Bank.  In the blink of an eye, Margaret and Walter are married.  Almost as quickly, Walter is taking credit for Margaret’s paintings of large-eyed melancholic children, which become a prestigious cash cow, thanks to some free publicity by Bay Area gossip columnist Dick Nolan (Danny Huston).

So far, so good.  I loved Big Eyes’ opening pastel-colored California landscapes, reflecting Margaret’s perception of the world around her, emanating hues so bright that (in her words) only God could’ve painted them.  But after about twenty minutes, the story drags until climaxing in a dispirited, predictable courtroom showdown.

Just as sad as the squandering of its story and acting talent, several promising ideas are teasingly presented, then rapidly discarded.  For starters, much could’ve been done with the vulnerability of the second sex in mid-20th Century America.  Instead, by way of narration, we’re dismissively told that Margaret fled her first marriage in an era before leaving one’s husband was “fashionable.”  This sets the tone for the cavalier handling of Margaret’s physical, verbal, and emotional abuse by Walter during the remainder of the film.

The religious and spiritual components of Big Eyes were ripe for exploration, too.  In a Catholic confessional scene, we’re shown the church’s complicity in Margaret’s docility, when a priest counsels Margaret to continue submitting to the head of her household.  At various points, we witness Margaret’s credulity, as she ascribes significance to fortune cookies, the blessing of a Hawaiian deity, and numerology.  A better film might’ve analyzed her pathological craving for dominance by authority figures, whether human or incorporeal.  This takes on even more relevance when she is persuaded to join the Jehovah’s Witnesses, perhaps only second to Mormonism among American homegrown religions in its reliance on controlling, male-oriented hierarchies.

Considering Margaret’s impoverished sense of self, it’s understandable why she obsessively painted sad-eyed little girls.  But here again, we’re taunted with hints of a deeper conversation that could’ve been had about art and its place in society.  Is art a democratic appeal to the lowest common denominator, as indicated by the mass-produced images flogged for a dime apiece by Walter Kean?  Or do we need elite arbiters of taste to protect us from our baser selves, as represented by Terence Stamp’s New York Times art critic and Jonathan Schwartzman’s haughty gallery owner?

Alas, we’ll need to look elsewhere for substantive ruminations on all of these important matters.  When I consider Big Eyes’ missed opportunities, I’m left to wonder if Tim Burton lost interest in his material partway through the creative process.  Or, at the risk of sounding uncharitable, perhaps the director of Frankenweenie and the dreadful Willy Wonka reboot is just as stuck as Margaret Keene, lacking the capacity to create anything more than shallow juvenilia.

(Parents’ corner:  Big Eyes is rated PG-13 for brief strong language and thematic elements.  While some sequences might frighten younger children, I doubt that teens would find anything here particularly distressing.)