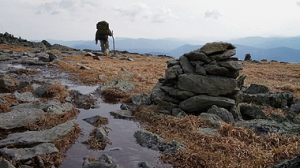 Having lived along the Eastern Seaboard of the United States for over 40 years, I’ve spent many memorable days hiking the Appalachian Trail (AT), in parts of Maine and as far south as my current home state of Tennessee. Thus, I was quite pleased to be introduced to an obscure gem of a film that terrifically integrates a history of the AT with a contemplation of its various meanings. (And it does all this in a compact 55 minutes!)

Given the skilled editing that seamlessly forms this well-structured story, it’s impressive that The Appalachian Trail: An American Legacy is director Sam Henegar’s first film. Trail opens with lovely imagery from various points along the AT’s 2200 miles. All-season shots of mountaintops, lakes, and forests induce a pleasing serenity, as various individuals (some thru hikers, some AT Conservancy members) relate the personal significance of this “simple path.”

While the reasons furnished aren’t necessarily profound, they’re most definitely wise. Ranging from solitude to a status-levelling sense of community, from fellowship with nature to a deepened spirituality, from temporary escape to a sharpened focus on besetting problems – some or all of these rationales will no doubt resonate with hikers everywhere.

From here, Trail enters the heart of its story, that of the founding and preservation of the AT. Henegar smartly, engagingly anchors this section in the vividly contrasting lives of two of the Trail’s key founders. Benton MacKaye (1879-1975) was the AT’s visionary philosopher, while Myron Avery (1899-1952) was its pioneering man of action.

MacKaye, a radical utopian motivated by personal tragedy, proposed the Trail’s creation in 1921, seeing it as a means to counter the stress of modernity. Avery, by contrast, was a Maine-born admiralty lawyer who more simply and pragmatically loved spending time in the outdoors. Though fiery, brusque Avery was as much a bridge-burner as track-forger, he was still instrumental in establishing dozens of trail-maintaining clubs.

This segment of the story is well-illustrated by brief clips of interviews with experts on the trail’s history, interspersed with footage of MacKaye, Avery, and numerous nameless hikers and literal trailblazers. It was a lot of fun to observe the changes in custom and attire across the decades, seeing tie-clad men and women of the ‘20’s and ‘30’s marching through glens or beaming triumphantly atop summits attained.

I only have two quibbles with this film. First, while narrator Dan Gold’s voice is appealingly homey and gravelly, his chirpy and upbeat tone sometimes seemed more suited to commercial work as opposed to documentary narration.

Secondly, I wish there had been more time in which we experienced the beauty of the trail unaccompanied by music. Don’t get me wrong, the simple melodies and spare instrumentation are pleasing and apt for Henegar’s story and images. Nonetheless, I basked in the brief moments where all we heard was wind whipping across bald peaks, hiking boots hitting rock, or birds chirping in peaceful woods. A few more minutes of this would’ve furnished Trail with some welcome breathing room.

But these are minor gripes. Kudos are certainly due the director for the years spent accumulating such splendid trail imagery. Whether dew drops on grass or a massive moose splashing about in a pond, the splendor of this footage amply repays Henegar’s efforts. (And from my own hiking experiences, I can attest that such beauty can be found only a short jaunt from many a two-lane highway pull-off, next to the distinctive signage indicating an entry point onto the Trail.)

I appreciate, too, that this has been both a labor of love and a family affair for the director. Henegar has plugged away on this film as a side project for five years while paying the bills as an auto body repairman. He also relates that his passion for the AT was kindled in him by his father, whom he has joined for yearly hikes along the trail since age 11. (As a charming touch, at various points in this documentary, we see the director’s father Steve walking the Trail. With his chest-length gray beard, he looks every bit the Tennessee mountain man.)

The American Legacy portion of the film’s title is no jingoistic window-dressing, either. Henegar makes a strong case that the AT illustrates what is best about our country, as the Trail progresses from the brains and muscle of a few far-seeing individuals to larger groupings of committed volunteers, and ultimately to federal protection. In an era where our politicians so often seem solely interested in blocking progress and self-aggrandizing, I wish this film were required motivational viewing for all our elected officials. Equally good, seeing Henegar’s documentary makes me want to hit the Trail again.

(Personal disclosure and parents’ guide: The director of this film is a friend of a friend.  However, I received no benefits in consideration of this review.  The Appalachian Trail: An American Legacy has not been rated by the MPAA. There is nothing in it to offend or frighten youngsters.)