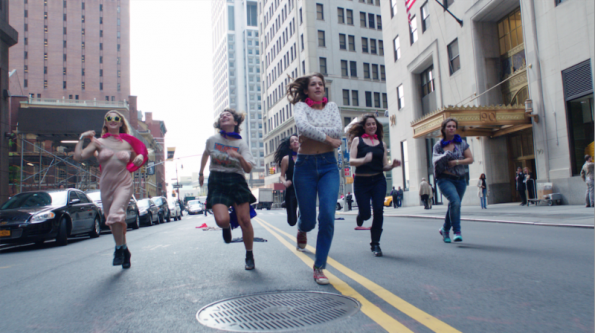 Theoretically, I ought to be the bull’s-eye at the center of Lina Esco’s target audience for Free the Nipple. On the one hand, I am a forty-eight year-old male who came of age during the Reagan eighties and has just enough religious and social baggage to be made uncomfortable by those who land somewhere to the left of me on the public modesty scale. But on the other hand, I fancy myself an egalitarian, maybe even a feminist, who finds hypocrisy in all forms (but particularly in the form of double standards) repugnant.

Tell me that there are still twenty-seven states where a woman can be arrested for breast feeding in public and I’ve got my pen half way out of my pocket to sign your petition before you move on to your second talking point. And yet Esco did somehow manage to lose me somewhere after she had me hooked but before I could sign on the dotted line.

Maybe it was when her character, a reporter named “With,” compared the topless protesters to Gandhi.

Or maybe it was when the rag tag team decided that Gandhi wasn’t sufficient inspiration and also spoke in hushed, reverential tones about their Eastern European sisters in FEMEN. Best case scenario is that nobody in the Free the Nipple movement has actually watched Ukraine is Not a Brothel. Spoiler alert–FEMEN was actually founded by a guy who realized he could make more money soliciting donations for a topless cause than he could selling pornography in a crowded market. It’s hard for me to believe nobody making the film was aware of that.

Free the Nipple begins with a slow motion montage of the activists running through the street, ripping their tops off in joyful abandon and defiance. Their breasts are pixelated, which seems an odd choice for a protest movie whose second central tenet is that censorship is really, really, really bad.  Maybe there was something about the way the footage was shot, guerrilla style, that meant they had to blur out the breasts here, or maybe the film is supposedly following With’s arc from curious but bashful onlooker to enthusiastic participant.

By the end of the film we’ve been shown nipples aplenty, so the triumphal montage of actual protest footage comes across as lacking a certain sense of daring. Besides, it’s Film Appreciation 101 that there is a fundamental difference in the social reception of the nude image and the nude body that is physically present.

The film’s key moment comes when With loses a bet and has to make the topless dash through the city streets while her partner films her. When a pair of police officers attempt to stop her, the camerawoman jumps on an officer’s back so that With can scamper away…and then feels as though her arrest for assaulting a police officer is somehow the greatest unjust use of patriarchal force since, well, ever.

There is more than one serious discussion to be had about eroticizing the female body as as a preliminary to justifying control of it, and a few more about slut-shaming, equal protection under the law, censorship, and return on investments made in public safety spending. Free the Nipple acts like none of those conversations have already begun–as though simply trying to initiate them will land a woman in the Gulag.

Double standards persist in our culture. Have we reached the point at which it is okay (in fact refreshing) for a man to be modest about public nudity but where a woman acting so is a signal that she is not emancipated? By the end of the movie, in some of the protest footage, we see a woman who appears to be being dragged off the street at some protest where a religious figure (the Pope?) is talking. When I visited St. Peter’s nobody–male or female–was allowed to go in wearing shorts. Not exactly a double standard, so what is she protesting? How exactly did we get from the proposition that it is bad to arrest women who are breastfeeding to the assertion that we need to desecrate religious landmarks since Christianity is the foundation of all patriarchy?

The film almost convinced me.

But then it started.