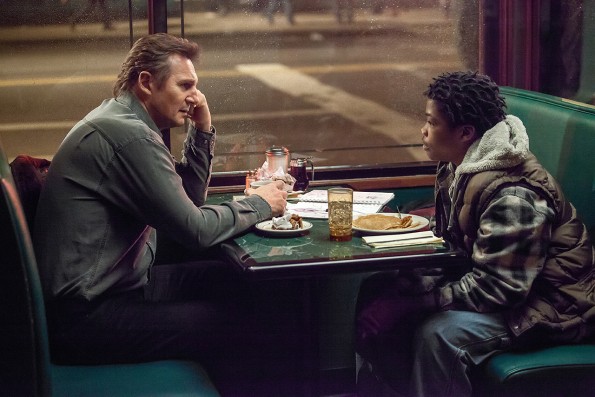 Scott Frank, if known at all, is probably best known for co-writing the screenplay for Steven Spielberg’s 2002 thriller Minority Report. With A Walk Among the Tombstones (***½), Frank turns to directing for only the second time, but he shows a mature knowledge of how to use a camera and how to edit a film. Additionally, he has scripted another solid screenplay for a tense thriller with good pacing, a high level of suspense, and a decent mystery.

Liam Neeson plays Matt Scudder, an ex-cop turned private detective. Even though the trailers revealed the reason for his career change, the only thing that should be mentioned is that in 1991 he was drunk off-duty, and he chased, shot, and killed two armed robbers while injuring a third. Now in 1999, he has been eight years sober and has resigned from the force, occasionally doing favors for people and accepting gifts in return. When Matt’s fellow AA member Peter (Boyd Holbrook) asks Matt to help his brother Kenny, Matt reluctantly agrees to talk to him.

Kenny (Dan Stevens — almost unrecognizable from his portrayal of Matthew in Downton Abbey) is a drug dealer whose wife was kidnapped and murdered by two thugs even though Kenny paid them the ransom. Being a drug dealer, Kenny wishes to avoid contacting the police, so he asks Matt to find the murderers so he can kill them. Matt insists that he cannot help, but when details of Kenny’s wife’s death match those of a gruesome unsolved murder from 1991, Matt worries the killers may strike again. The killers also left Kenny a recording of his wife’s death, which manages to break even Matt’s stern resolve.

As an ex-cop willing to compromise to support himself while battling past demons, Neeson gives a restrained and engaging performance. He finds the balance between gruffness and empathy, as depicted in his interactions with Peter and Kenny. Neeson’s aggressive, no-nonsense exchanges with the killers are reminiscent of some of his other action roles, but he avoids any scenery chewing. His relationship with TJ (Brian “Astro” Bradley from Earth to Echo), a homeless teen he met while doing research at the library, hits the essential notes, and Neeson and Bradley have just enough chemistry to make the mentor/assistant relationship work.

The greatest strength of A Walk Among the Tombstones is the careful, controlled editing. Scott Frank clearly understands the camera’s power in determining what the viewers see and do not see. He gives them enough information to understand what is happening, but he leaves enough unsaid to maintain the sense of mystery. The prolonged murders are gruesome and horrific to put it mildly, and Frank’s quick cutting before the most disturbing acts of violence makes the scenes even more unsettling.

The screenplay is also strong, maintaining a brisk pace and almost always developing the mystery. Obvious subplots are not left dangling for the audience to guess at, but instead are quickly resolved with a twist. A couple attempts at comic relief are a bit forced, and there is a one scene tangent involving Matt having a run-in with the FBI, but other than that Frank’s script does not deviate from the streamlined mystery.
Not everything works as well as the editing and the screenplay. There is one bizarre use of slow motion which feels like it belongs in a different film. Thankfully that scene is short. A freeze frame sequence towards the end tries to draw a metaphor between Matt’s current desperation and his struggles in alcoholics anonymous. The connection is not set up well enough to be completely believable, and the freeze frames are awkward. The sequence also does not relate to the one thing that does offer Matt some redemption: his relationship with TJ.

A Walk Among the Tombstones is very culturally aware, and it uses that to its benefit. TJ has done enough reading at the library to drop names like Sam Spade and Philip Marlowe. The method of the killers has more than a little in common with Buffalo Bill in The Silence of the Lambs; however, that similarity makes it painfully obvious that A Walk Among the Tombstones has no characters to equal either Clarice or Lecter in that 1991 masterpiece. Nonetheless, a search for Buffalo Bill-esque killers still makes a compelling mystery, even with a hard-boiled private eye.

Despite my enjoyment of A Walk Among the Tombstones, I cannot recommend it as highly as I would like. While Frank certainly understands the power of restraint and suggestion, some of the scenes, even in the brief amounts shown, are so intense that I would not hold disliking the film against anyone. There were quite a few gasps of horror followed by squirming at my screening. On the other hand, if one can view the violence in the context of a dark tragic mystery, A Walk Among the Tombstones functions both as a competent thriller and as an intriguing character study.