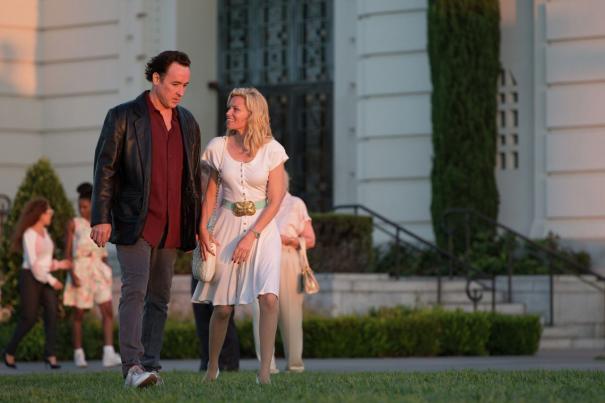 I am on the fence–between “good” and “great”– on this Brian Wilson biopic.

On the one hand, it hits a lot of standard music biopic beats. On the other hand, the jagged edge between insanity and creative genius has never struck me as quite so poignant. Unlike Jersey Boys (which I didn’t like) and Get On Up (which I did), the film isn’t structured around the creation of various hits. When the film opens, an over-medicated Brian Wilson gathers a few moments of silence as he sits in a Cadillac. Melinda Ledbetter, the saleswoman, listens to him ramble and lends him a pen to jot down a random thought that will never be a song. Maybe he senses through the drug-induced haze and hallucinatory voices that she she is safe, someone who can be trusted. Maybe she hears his voice calling out to her in the awkward silences. Maybe. But whatever connections they may feel, there is still a huge gulf between them, one that’s hard to see how it could ever be bridged.

I would not have pegged Rampart auteur Oren Moverman as the ideal choice for a Beach Boys movie, but it turns out to be a great choice. The screenplay is not as experimental in structure as I’m Not There, but it does feature two different actors (John Cusack and Paul Dano) playing Brian Wilson at different times in his life. Cusack has always conveyed a sensitive-soul vulnerability going back to The Sure Thing and Say Anything… Freed of the need to be funny–Wilson is portrayed as deeply wounded as well as sick–he does his best work in ages. It’s almost enough to earn him forgiveness for Hot Tub Time Machine.

I’ve also never been a huge Paul Dano fan, but I thought his work here was stellar. He is helped a great deal by a judicious use of the soundtrack that allows us to understand what Wilson is hearing in his head. If not handled right, this conceit would be too neat, but it is restrained. The scenes between Dano and Bill Camp as Murry Wilson are all the more painful for Brian’s desperate attempts to be heard. The creation of the music, when it is presented, is messy and energy-draining. Here again are scenes we’ve seen before–long sessions ending in fights, flashes of recognition as musicians speak in creative shorthand–but the editing makes them feel like long sessions with ellipses rather than easy montages.

What I’m not on the fence about is Elizabeth Banks. She’s riveting. Make no mistake, Brian Wilson is the famous figure, but this is Melinda’s movie. Pohlad shoots one early restaurant scene where Brian reveals painful memories by giving us a glimpse of him in a mirror but keeping the focus squarely on Melinda’s reaction shots.  This scene, indeed the whole film, is a master thespian class in acting without speaking, and Banks conveys a huge range of genuine emotions that refreshingly don’t dip too often into the wells of shock and pity. Melinda needs to be genuinely drawn to Wilson for the story to work.

In many ways Melinda’s character is a reminder that we often prejudge beautiful people as less intelligent. With each scene that Dr. Landy (Paul Giamatti) tries to goad Melinda into tipping her hand, we slowly come to realize that this woman is not so much clueless as cautious. She doesn’t fear her own vulnerability so much as Brian’s, and her mental calculations are so swift they seem intuitive. Mock if you must, but the performance Bank’s turn most reminded me of was François Leterrier’s in A Man Escaped. She may not hear audible voices, but Melinda sure seems as though she is able to hear the wind blowing where it will. When she finally acts, it is not a surprise. Nor is it a triumph of passion over caution. Sometimes love is patient as well as kind.

I love art, including music. My life has been enriched by it. But I will never, ever, think of a song or a novel or a film, however brilliant, as a fair trade for someone else’s suffering. I can never not wish an artist could have been spared his pain, whatever blessings love and mercy were able to wring from it. What ultimately tips me in the film’s favor is that it doesn’t ask me to do that, simply to cherish the result all the more for cost that was paid to bring it into existence.