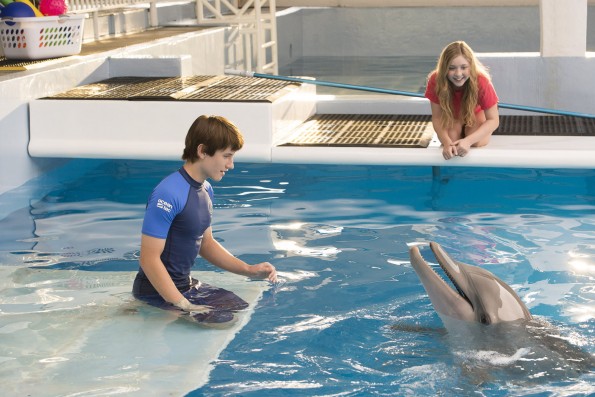 You know, either I have turned into one of those movie critics whose soul can be bought for a handful of stale junket donuts and a ten minute round table with Charles Martin Smith, or Dolphin Tale 2 (★★★) wasn’t half bad.

The film picks up where the 2011 family favorite left off. It doesn’t so much blend fact and fiction as acknowledge that the previous film–inspired by the true story of the dolphin named Winter that received a prosthetic tail–created a tourist draw at the Clearwater Marine Aquarium.

The sequel has two intertwined stories, one about the dolphin and one about the boy who loves it. Laws governing aquariums apparently prohibit keeping dolphins in isolation. Early in the film it looks as though Winter may be transferred to another location because of the dolphin’s inability to co-exist with a newly rescued companion.

Meanwhile Sawyer (Nathan Gamble) has the opportunity to fill a prestige slot in a “study at sea” program. He recognizes this as a good opportunity, as do those who love him, but he can’t quite bring himself to leave behind a place (and the work) he is passionate about. Hazel (Cozi Zuehlsdorff) wants her father to take her seriously and include her in decisions about running the aquarium. Her isolation isn’t helped when a pretty volunteer starts looking doe-eyed at her best friend but not quite boyfriend.

This is not complex material, but it doesn’t have to be. As with this summer’s Earth to Echo, it is nice to have an occasional PG movie that acknowledges kids grapple with real emotions and problems, sometimes without having sex or doing drugs. I appreciated that Smith (who wrote as well as directed) did not make the government agent calling for the best interest of the dolphin into a villain. Even the rich philanthropist who bailed out the struggling aquarium in the first film is given respect. Most of all, I appreciated that Dr. Haskett’s (Harry Connick, Jr.) dilemma was one that could resonate with adults as well as kids. Should he do what is in his perceived best interest or what he knows to be the right thing to do?

The film does have some ragged edges. A cameo from soul surfer Bethany Hamilton is so short and poorly integrated that it fits the “why bother?” category. Morgan Freeman and Ashley Judd return in limited capacity. Hazel’s subplot is cut mysteriously short. So much so that I winced for all girls when her dad, at a key moment, said he wanted Sawyer right beside him.

And yet, there’s something….comforting…about seeing these characters together again. The rapport between Connick and Kris Kristofferson is grand to watch and Freeman delivers one of those one-scene-but-steals-the-heart-of-the-picture performances that so often come across as money grabs but occasionally really do enhance the movie. I loved how Austin Highsmith and Austin Stowell created young adult characters who cared for and about the generation below them. Speaking as someone who has always had a special relationship with my older brother, I found Stowell’s rendition of Kyle particularly winning. I was thrilled, too, that we got a movie that was not in 3D, a process that I insist washes out color and dims the viewing experience. The colors pop here. Big shout out to Smith and cinematographer Daryn Okada. I’ve been to the Clearwater Aquarium and recognized many of the shooting locations, but they make it look positively…cinematic.

Okay, I admit that Dolphin Tale 2 is probably not the kind of movie I would have screened in a theater if the film’s publicity unit hadn’t twisted my arm a little. But you know what? I’m kind of glad they did.