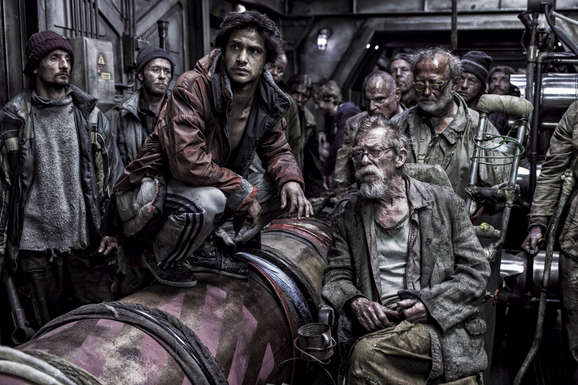 The first joke was more abstract, and I liked it the better for it. Of all the differences between two disparate things, why focus on that particular one?

I wouldn’t debate anyone who thinks the films Snowpiercer and The Giver have as much in common as an elephant and a plum, but I have been thinking about the two in conjunction recently. The Giver is based on Lois Lowry’s young-adult novel of the same title. I reviewed it, none too kindly, at Christianity Today, and I did not appear to be the only critic to find it wanting. Snowpiercer, on the other hand, has been the summer’s breakout water-cooler movie. Fewer people have seen it, but seemingly everyone who has wants to talk about it. Spurred by early release on video-on-demand, the film is the mirror image of a larger studio piece that fails to live up to high expectations. 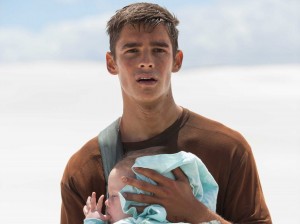 Both films have fantasy settings the work as political allegories but don’t exactly hang together if you examine them for plausibility. The Giver is set in a society (world? commune? enclave?) after some unnamed catastrophe. People have been conditioned to obey and accept their assigned positions. Political stability has been achieved, but only at the cost of giving up emotions. Do residents actually not see color or merely not have a word for it? How exactly was the first “receiver of memories” created? Why, when a receiver crosses a geographical line are all the memories released? Why for that matter does society insist that people continue living in nuclear families if child birthing and child raising are going to be assigned? Even those of us used to suspending disbelief with a shrug and a habit of accepting movies’ premises on their own terms had a hard time getting past the suspicion that the way the world operated was designed out of necessity to the plot rather than having the plot follow logically from the world building.

Snowpiercer is set after some sort of ecological disaster. A small percentage of the population has survived by living on a train the barrels endlessly through the snow. Why was mankind able to solve the riddle of endless energy for the locomotive but not able to apply that technology to global problems? Who built the track? And how did they keep people away from the train when it came time to board the “rattling ark”? Why does the train go through the wilderness at all? Why is motion necessary, and if it is, why not just move around in some big, self-contained circle? Why are there a mix of races and languages on the train? Did humans work cooperatively to create it? And if it has been going on for seventeen years, wouldn’t a common language emerge?  The answer to all these questions is a rightful, “Who cares?”

I am not here to argue whether or not that double standard is fair. I’ve mostly just been thinking about why it happens. Why do we acknowledge the faults or plot holes of some narratives but dismiss them as inconsequential? Why are we endlessly inconsistent in the application of our critical judgments? One answer is that I’ve long suspected that we form our judgments first, unconsciously, and only later construct reasons for them that are grounded in formal analysis. We–and I include professional critics–don’t always know at first glance why we like or dislike something. I’ve heard that in political research polls can be skewed by how you ask the question. Since people don’t want to admit their preferences are arbitrary or unconscious, they will latch onto whatever reason the pollster (or the critic) offers.

If critics are insistent on their own formal consistency, it can be fun to catch them in seeming contradictions and watch them tie themselves in knots trying to explain the vagaries of human taste. You disliked The Giver, fine. But did you notice the reason you gave applies equally to this other film that you enjoyed?

Film, though, is made up of multiple elements, and sometimes a film works or doesn’t based on how those elements work together. I’ve sensed that those who liked The Giver more than I did disagreed that the narrative premise was silly and poorly developed. Conversely, those with whom I’ve conversed who liked Snowpiercer acknowledged that there is no plausible back story to create the world we are seeing. They just appear to have been bothered by the lack of a plausible origin story and to like other elements of the film besides its narrative.

What are those elements? I’ll suggest two.

First, Snowpiercer looks better. Film is still primarily a visual medium. Even I, as someone who primarily loves narrative, will acknowledge that. Lowry uses a lot of abstract language to talk about ideas in her book, but abstraction doesn’t film well. Nowhere is this more evident than in the film’s transition from black and white to color. In the book, it doesn’t matter if this is literal or rhetorical. (Does something exist if you don’t have a word for it?) The film seems reluctant to trust the audience to understand what the characters are talking about–it’s a gradual reveal in the book–and so must render it visually on the screen. But this makes no sense as an ontological rather than an epistemological phenomenon. How do the elders control the optic nerves of every eye? Why does control of Jonas’s eyes fade? The images that are shown–even the ones that are supposed to convey the first experience of powerful emotions–are flat and generic. A scene with Jonas sledding down a building’s exterior is haphazardly edited together to tell you it is thrillingly (quick cuts) rather than to show you what thrills him about it.  Snowpiercer, by contrast, gives you a lot to look at in every frame. It is much better at conveying ideas–even complex ones–visually. You would think that a film set almost entirely on a train would be visually static, but it’s not. The steampunk art design isn’t just a lazy contrast of coaches between the rich and poor, either. There are separate looks for many different parts of the car. Days after seeing the film, I’m still haunted by particular images: a child trapped in a prison of moving gears, the stare of a bear, a glimpse of bugs on a conveyor belt. I can only remember one specific shot in The Giver, a snippet of a sailing ship, and that was only because it came at a key narrative point and left me so underwhelmed.

Snowpiercer also comes across as much more comfortable with ambiguity–both narrative (what happened?) and thematic (what does that imply?) I’ve heard reasonable, smart people debate whether its end is hopeful or nihilistic. (Given the quick allusion to Noah’s ark in the preamble, I’m leaning towards the former.) In The Giver, chief elder Meryl Streep can debate about the necessity of surrendering free choice all she wants, but once Jonas sees the baby being euthanized there really isn’t much doubt what he is going to do or whose side of the debate the film is on. In this interview, even Lois Lowry complains about the end of the film, letting fans know that studio execs demanded a more upbeat–and hence more clear-cut–ending. Ambiguity isn’t inherently better than clarity, but when one is involved in social critique or political allegories it goes a long way. Plus, the more heavily the ideological deck is stacked in a film, the more the viewer is forced into a passive role. Rather than being invited to engage with the film”s ideas, viewers of  The Giver are allowed only to affirm them and cheer their representative–Jonas–as he attempts to enact the only decent response. Snowpiercer is clearly more sympathetic to the have nots than the haves, but even they disagree–particularly about a course of action late in the film.

Will these explanations satisfy those who liked The Giver more than I did or those who were not engaged by Snowpiercer? Probably not. But maybe they will be a reminder that the elements that go into a critical judgment are many and not every seeming contradiction comes from hypocrisy. Maybe, too, they will be a reminder to critics that what we think is driving our judgments is often only a piece of a larger picture. Nobody can exhaustively catalog their own viewing experiencing. That being so, maybe reviewers should try harder to make reviews opening statements rather than final words.