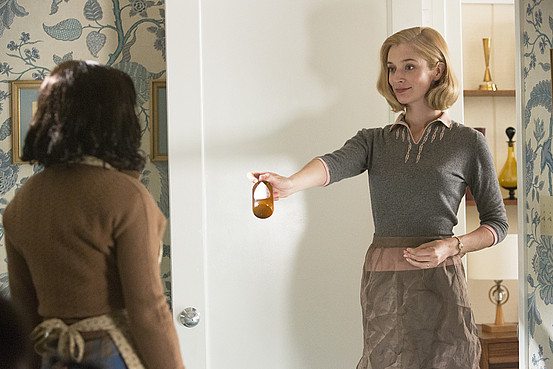 With the airing of Episode 2.4, the second season of Masters of Sex is now finished with its first quarter. It is perhaps too early to write off the sophomore year as a disappointment, but it is no longer too early to call its unevenness a trend.

If I had to put my finger on one way in which Season 2 has misfired, it would be by foregrounding the characters’ personal lives and pushing the study into the background. Doing so has turned the show into less of a period drama and more of a melodramatic soap opera. I mentioned last week that the depiction of the affair between Bill and Virginia was having trouble capturing some of Johnson’s at times contradictory claims regarding whether or not she was coerced. The teaser for next week’s episode hinted that the show will get around to dealing with that by having her press Bill on whether or not their sexual “research” is still a condition of her continued employment. Also, the climactic scene of episode 2.4, showing Bill arriving at a third hospital, Buell Green, suggests we have yet more episodes to go before we link back up to the biography’s account of how and where the study eventually proceeded where and when it did. I am hoping that this won’t be delayed until next year, making all of Season 2 a long, dead end.

Absent advances in the study, the show appears to be spinning its wheels a bit, and more of the scenes feel like filler. Libby’s increasingly mean-spirited interactions with her nanny/maid Coral could be meant to show how the pressures of being the perfect housewife destroys the confidence and even decency of good people. But we’ve seen this sort of thing before–at least we have if we’ve seen The Help–and these scenes are drawn out and underlined to the point of being painfully obvious. When Coral entered the room holding the baby while Libby lunched with society friends, I turned and asked my wife, “Is there any chance Coral doesn’t say ‘asked’/’axed’ in this scene?”

Virginia’s selling of diet pills to supplement her income continues to be a thread that’s mystifying in its pointlessness. One supposes this is about reminding us that she isn’t with the study, as though her dream and her parking lot argument with Bill were not enough. Johnson did not have a degree, but she presents herself in Maier’s biography as someone who cared about medical science and professionalism. At times she expresses contempt for those who would lie about scientific research or medical knowledge to the detriment of others but for one’s own gain. Oddly though, while her interactions in this subplot shows how she has been brought low, they don’t convey much of the self-hatred the show has convinced me she would feel. Virginia to this point has been shown to be a very uncompromising person. So the diet pills subplot doesn’t  just come across as a misfire, it actually seems like poor writing; it confuses us by flying in the face of what we’ve been previously told about the character.

Likewise Bill hitting his boss and Betty and her rich husband finally coming clean with one another. Given that the second hospital was not historical and was not going to work out, could not whatever points were made there have been covered in half an episode rather than a quarter of a season? Bill genuinely cares about the study and is not going to allow his bosses to use it as a peep show. Is that a surprise? Or was it only a surprise that it took him so long to realize it wasn’t going to work? Similarly, Betty and her husband appear to change directions and finally get honest with one another not through an organic development of the relationship but because the time at the second hospital is done and the episode needs to tie up that thread.

The willingness to compromise–or not–is the thread that runs through the episode. That theme accounts for some of the best moments, despite a heavier than usual hand. Dr. DePaul (Julianne Nicholson) shares with Virginia that she cheated on a calculus exam in college, asking whether “one shortcut” diminishes everything that comes after. It’s a good question, one worthy of a show that, in its best moments, reminds us that whatever good came from Masters’s and Johnson’s work was only made possible by their willingness to break rules and bend personal and professional ethics. (Maier’s history tells of a lawsuit brought by the husband of a paid surrogate and provides testimony of several clinic board members regarding how Masters often did not share elements of his work with his bosses if he thought they would not approve them.) It would have been interesting to hear Johnson’s response to Lillian’s question, but, alas, the scene is mostly only there to show that Virginia won’t confide in Lillian.

Perhaps the most interesting scene is that between Virginia and Austin as he confronts her about seeing her with Bill at the hotel. When asked to explain why she quit the study but is now working on it again, Virginia says they had a fight over whether the research was ready to be presented to the hospital but that later Bill “admitted he was wrong” and “he apologized.” This conversation parallels her exchange with the bellhop in “Fight” and marks the second week in a row she has exaggerated or fantasized about Bill’s honesty and attentiveness. The whole point of the Ethan-Bill-Virginia triangle in Season 1 was, one presumes, to show that Virginia’s deepest longing is to make her own way in the world, to not be dependent on a man, even if he is solicitous in his dominance. Lillian interprets this drive as ambition, hence her cutting remark that she never went into medicine to see her name on a study. That interpretation of Virginia is not totally wrong, but neither is it the whole truth. Virginia is the most complex of the characters not only because she has competing desires where most of the other characters only have singular ones, but also because the desires that are in conflict with one another lie closer to one another, making it hard, even for her, to separate the good from the bad.