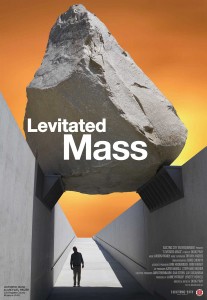 Levitated Mass is one of those delightful, obscure but unheralded documentaries that always seems to congregate around my the bottom of my list of annual favorites. Directed by Doug Pray, it tells the story of the conception and installation at the Los Angeles County Museum of Art (LACMA) of Michael Heizer’s art piece of the same name.

The mass is a large piece of rock transported from a nearby quarry, and if you are wondering how a rock is a work of art…you’re not the only one. As the mass makes its journey to LACMA to be installed, Pray interviews witnesses about their interpretations of the piece and feelings regarding the expenditure to install it.

What ensues is a discussion that touches not only on Heizer’s work but on the value of art in general. Many respondents are thoughtful, but a fair number question the priorities of a society that would spend millions of (admittedly privately funded) dollars on a single art installation while large segments of the population struggle with poverty.

One of the things that sets Levitated Mass apart from some other art documentaries (such as My Kid Could Paint That and Who the #$&% Is Jackson Pollock?) is that it is more clearly on the side of the arts. LACMA director Michael Goven explains both the process the museum has to go through to get permission to transport the mass through surrounding municipalities and why it thinks doing so is worth the headache.

Once permission is obtained, transportation of the mass becomes a piece of performance art in itself, something weirdly reminiscent of the works of Christo and Jeanne-Claude. Crowds line the street, sometimes waiting for several hours, to see the rock inch by on specially designed truck beds. At times the museum staff has to raise traffic lights or electrical wires. Engineers worry that if a truck malfunctions while the mass is on an incline, they could easily have a runaway boulder that could could do serious property damage or worse. Levitated Mass is as much a valentine to the engineers as it is to the artists. In fact, it is one of the smartest documentaries I’ve seen at recognizing the kindred spirit of those two types of craftsmen. (I say that as someone whose wife is an artist and whose father-in-law is an engineer.)

And once the installation is complete? Well I certainly want to see it the next time I am in Los Angeles. Heizer is quoted at the beginning of the film saying that his works merge the “technological” and the “primordial” in ways that make us stop and think about our immediate (and larger) environment.

Is prompting that thought worth a couple million (privately funded!) dollars? I think so. More importantly, Michael Heizer got LACMA to think so. I understand those who object, but the film in a round about way reminded me of Big Miracle. While it is easy to understand and empathize with those who are in need, I don’t think most of us (deep down) really want to live in a society exclusively focused on only meeting basic needs. The soul and imagination must be fed as well as the mouth. Besides, at one point along the route, a man is interviewed who is homeless. He wants to see the mass transported.

One joy of art is its ability to move and spark thought in a diversity of people who witness it.

Levitated Mass opens in Los Angeles on September 5, with a DVD to follow from First Run Features. Check out the trailer below: