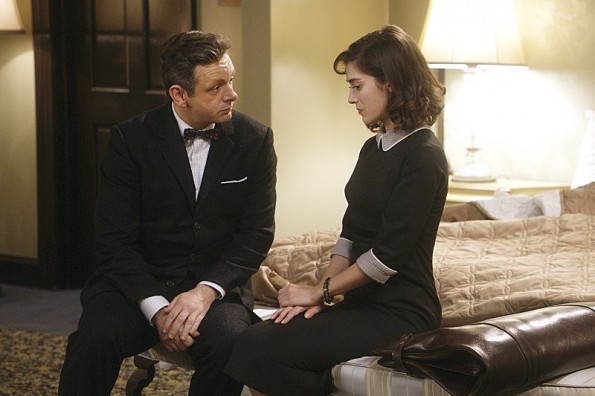 The don’t-call-it-an-affair between Virginia Johnson and Bill Masters has been the one element of Masters of Sex that most blatantly deviates from Thomas Maier’s biography of the same title.

Of course it would be hard, if not impossible, to capture the ambiguity presented in the book, since Maier gently highlights discrepancies between public and private statements that the pair (Johnson, especially) made about their sexual involvement with each other. In Chapter Fourteen, entitled “Masks,” he relates confronting Johnson with the differing recollections of longtime aide Robert Kolodony that the sexual liaisons between Masters and Johnson were more coercive in nature than either had previously admitted. While some of Maier’s assumptions about the validity of Kolodny’s  assessment are based on his interpretation of Johnson’s reticence when confronted with them, he does quote her as finally saying, “Bill did it all–I didn’t want him” and (in a voice Maier reports was “tinged with anger” that “I had a job and I wanted it.”

Seen in the context of these changes, the most poignant moment in Episode 2.3 comes when Virginia sets limits on their sexual behavior. When Bill disrobes her and circles her in anticipation of a sexual encounter he asks her to tell her how much she wants him and to “beg” him to make her feel good. Even in her vulnerable position (both immediately and in the larger sense of her career aspirations), she declines, asserting “I can make myself feel good.” That declaration, coupled with the subsequent demonstration of her sexual independence is consistent with the book’s (and show’s) description of Johnson as someone able to separate the physiological pleasures of sex from the cultural expectations that they should only (and thus can only) be enjoyed in the context of a monogamous, married relationship. But it is inconsistent with source material’s insistence that what is most important to her is the ability to participate in meaningful work. Physically–sexually–she can make herself “feel good,” but her deeper desire is a job, a partnership, and professional respect. These are things that, because of the cultural attitudes towards women, she cannot provide for herself.

In fact, by juxtaposing Virginia’s refusal to “beg” with Bill’s later story about his father’s abuse, the show suggests that the two are similarly proud and thus well partnered. (Bill uses the exact same word when he relates that his father said the beatings would stop “when you get down on your knees and beg for mercy.”) Virginia rightly points out that Bill was a “child” when this happened, and thus would have nothing to be ashamed of if he had been unable to withstand his father’s beatings. “There’s no shame in saying you’ve had enough.” Virginia recognizes that capitulation and consent are two very different things, and that a large portion of their difference lies in the power discrepancy between the one doing the asking and the one being pressured to comply.

The word “beg” comes up a third time. After the hotel meeting, Bill receives a message from the hospital than the father of a baby born with both male and female genitalia has scheduled a castration for his newborn son against Bill’s advice. (Bill argues that since the child is chromosomally  male, a harder reconstructive surgery should be performed to allow him to grow up and live as a male.) It is the father’s earlier boorish behavior–Bill describes him as a “bully” to Virginia–that reminds Bill of his father in the first place. Used to getting his way in medical matters, Bill desperately pleads with the father, “begging” him to reconsider.

In this interaction, the episode succumbs to the show’s tendency to sometimes be a little too on the nose. This is the second week in a row where a patient case provides a foil for the protagonist’s personal life, which is pretty conventional for a procedural. (Kyra Sedgwick’s The Closer used this trope fairly consistently its last few seasons.) The use of the convention itself isn’t wrong, but the way it is used in this episode somewhat idealizes the affair.

Towards the beginning of the liaison it looks as though the outside world is going to impinge on their oasis. Bill is clearly frustrated, watching a boxing match and not responding to her overtures. When she says she will run a bath, he follows her into the bathroom and initiates rough (or at least non-tender) sex. “You know ‘hello, how was your day’ is also a good opener” she says. Here it looks as though the show is getting around to acknowledging that since it is impossible to separate the act of sex from our emotions, it is equally impossible maintain that any sexual intercourse is non-relational. Nothing is ever “just sex.” That point is reinforced the following morning when Bill insists they maintain the charade that this is research by writing up a lab report. The gulf between Gini’s clinical description–“two acts of intercourse, mutually satisfying…one masturbatory act…role playing throughout” and what we have just witnessed underscores the theme that how and why people have sex is as important as the simple biological fact that they do.

But returning to Bill’s interaction with the insanely fearful dad, the episode shows Bill somehow able to work out (or at least work through) his anger and aggression by carrying it into and releasing it in the bedroom. He is the better doctor (though still not successful) for having had the adulterous encounter. That sort of “ends justify the means” logic reminded me of Tom Wingo’s justifications of his affair in The Prince of Tides. Adultery is okay as long as its therapy. That said, this is just one episode, and the coming attractions indicate that the couple will eventually be confronted with the negative effects of their affair no matter how much they try to dwell only on what they perceive to be the positives.

A more successful trope in this episode was the persistence of stories and their ability to shape our attitudes. Virginia is distraught by her daughter’s conventional (as to gender roles) story telling, pushing her to make up a story with more female agency before finally relenting and allowing the girl to pick her own story. (“Maybe she could rescue him…it could too happen…You’re right, you tell whatever story you want.”) Her willingness to let her daughter be a princess-loving girlish girl parallels Bill’s plea to the newborn’s father to “let him be what he is.” Virginia is signaled to be the better parent than either Bill’s father or the hospital dad because she respects her child’s choices even when they are ones that personally disappoint her.

If both those examples are a tad too explicit, the episode’s best scene was probably one with more ambiguity. Virginia overhears a solicitous bellhop trying to remind Bill that women–at least judging by his girlfriend–like jewelry and surprises and gifts, no matter how much they say those things are unimportant. Later, Virginia defends her “husband” (she and Bill are pretending to be married so that a respectable hotel will let them stay): “He does other things for me. He takes me seriously. He listens to me. [….] And in a few years those are the things your girlfriend will appreciate.”

Is Virginia here describing the real Bill and what he provides for her? (He put his name on the study but at this point she remains unhired at the new location.) Or is she describing her imaginary Prince Charming, the husband of her own fantasy, role-playing story? Perhaps she is simply trying to educate a male member of the younger generation, aware that it is probably too late for her to change the world she lives in but increasingly concerned about the world she–and their work–will leave for her daughter to inherit.

Season 1: Three Ways the Showtime Series Surprised Me By Being Good.