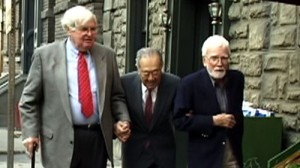 Does the film community do a better job than the larger American community at respecting its elder statesmen? Released a year before Martin Scorsese’s Hugo (2011), Something’s Gonna Live shares with that film a deep respect for the current industry’s forefathers. In director Daniel Raim’s documentary, the pioneers include Robert F. Boyle, Henry Bumstead, Conrad L. Hall, Albert Nozaki, Harold Michelson, and Haskell Wexler.

If you don’t know those names, you do know their work. Boyle received an honorary Academy Award for a career in art direction, including work on North By Northwest. In the documentary he also discusses work on In Cold Blood and The Thomas Crown Affair. Bumstead’s credits include Vertigo, To Kill a Mockingbird, and The Sting. Hall won three Academy Awards for Best Cinematography and was nominated an additional seven times. Nozaki worked as Art Director on The War of the Worlds and The Ten Commandments; Michelson provided storyboard illustrations for Ben-Hur, The Birds, and The Graduate.  Chances are that even if you are only a nominal film lover, you can name most of the actors and directors that made these films iconic. The men responsible for scenery and cinematography, for the look of the classics of the most visual and visceral of artistic forms? Not so much.

This relative anonymity is acknowledged by the men Raim interviews, yet there is nary a whiff of bitterness or resentment at it. Actually there is the reverse. These are men who love(d) their work and feel privileged and fortunate to have spent the bulk of their lives collaborating and having a hand in creating great works of art.

A good documentarian who had access to these men could not help but making a fulfilling and instructive art process story, extracting valuable tidbits about the production history of some of Hollywood’s most beloved films. Something’s Gonna Live has those moments, but it probes deeper, getting insights not just about the technical aspects of art direction and cinematography but also about human nature, insights that expand the pool of those who might be enthralled by the film beyond those who want a master class in the techniques of filmmaking.

Raim said in an interview with 1More Film Blog that his initial inspiration was to attempt to capture these men as “human beings” and not merely “talking heads.” That the film is successful in that regard is primarily seen in the way it captures Bob Boyle’s “philosophical mind” in addition to his “ability to articulate the craft of filmmaking.” Raim states that “even in Bob’s classes at the AFI Conservatory, instructing us in the craft of production design was almost an afterthought; Bob was mostly concerned with ‘storytelling.'”

That the documentary is mostly positive about the history of film does not mean that it is not self-reflective about the discipline that has permeated the consciousness of contemporary culture. There are comments about technical innovations and how films today are almost “too perfect,” a quality that robs them of their humanity. There is also a frank (and prophetic) dialogue between Conrad Hall and Haskell Wexler (cinematographer for Who’s Afraid of Virginia Woolf?, One Flew Over the Cuckoo’s Nest, and Matewan) about the ways in which violence has become both more pervasive and more explicit in contemporary films and the way consuming that violence changes us. Of it, Raim says:

Conrad and Haskell’s discussion of violence was a natural extension and fit thematically with the thread of the film. Structurally, Something’s Gonna Live goes from a discussion on The Birds to investigate The Thomas Crown Affair (a bank robbery, cutting out the middle man) to In Cold Blood. When I interviewed Conrad Hall, he had just completed work on American Beauty and was really concerned how violence was going to be portrayed in that film. (Re: The gun shot at the end; blood splattering on the wall, etc.) His concern is: Psychological violence vs. violence for it’s own sake.

It is human nature as one draws closer to death to think about one’s past achievements not merely in terms one’s reputation but also of one’s legacy. One of the most refreshing, satisfying, and gratifying aspects of Something’s Gonna Live is the inescapable conclusion that these men care(d) about film, care(d) not just that they be technically proficient but that they say something truthful about the human condition. As such, it serves as a reminder not just of the films that we have grown to love but also of why we loved them and why we continue to love them even after the men who gave them to us have passed on. Hall died in 2003, Bumstead in 2006. Boyle lived for a century, dying at the age of 100 in 2010. Their lives spanned, quite literally, the history of American film, and those of us who love that medium can count ourselves fortunate not only because their work touched our lives but also because–thanks to Raim’s film–they were also able to speak to us directly.