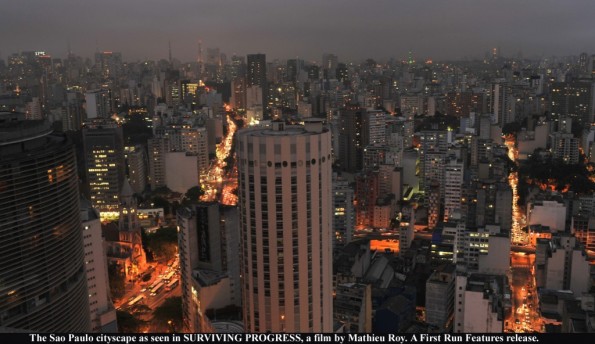 Six years after An Inconvenient Truth, it is depressing, maddening, and probably a little counterproductive that the immanent global catastrophe film has become a genre unto itself. What’s the alternative, though, for those who see (or think they see) the writing on the wall?

The film, based on A Short History of Progress by Ronald Wright, defines a “progress trap” as an action or idea that seems to be good and may provide short term benefits but which which is ultimately destructive, or at least unsustainable. The thesis is that the concept of “progress” is itself a progress trap. In such an argument the definition of the terms is central, and the film is a bit shaky on that point. Is progress synonymous with increasing complexity? Is it defined by a single metric such as life span, ease of existence, provision of core essentials, or some utilitarian estimation of all of these factors? To the extent the film has a definition that is central to its critique, it appears to be an economic one. Progress is synonymous with rates and ease of consumption, the facility with which finite natural resources can be harvested and translated into products that (seemingly) increase an individual’s happiness or well being.

Thought of in terms of consumption costs, the notion that progress is not sustainable is a relatively simple concept to grasp mathematically. As one participant in the film put it, if nature can be thought of as capital, humans for most of our existence have been living on the interest–consuming at a lower rate than at which nature is capable of producing new resources. The fear is that now, or more recently (the claim of the film is since the early 1980s, though it doesn’t really do more than assert this date), humans are eating into the “capital” of nature, spending resources at a rate faster than they are renewed and thus shrinking the pool of resources that can reproduce or replenish those resources.

Towards the end of An Inconvenient Truth, Al Gore speaks about the tendency of listeners to such sobering messages to go directly from resistance to the message to despair that nothing can be done. I tend to be one of those people, and while I understand that part of that response is just my nature–I am prone to depression–I increasingly see that some of responsibility for that response has to be attributed to the presenters. Like An Inconvenient Truth, Surviving Progress does a much more brutally efficient job of laying out the problem(s) than exploring what anyone is doing about it. I get that the first (increasingly overdue) step towards dealing with a problem is admitting it exists, but at a certain point in any belief system converts have to be transformed into practitioners, don’t they?

To be fair to Ronald Wright, this is a concern about the film and the medium of film more so than about any of his ideas. We get nods in the direction of the “How Should We Then Live?” question towards the end of Surviving Progress, though the scope of the film makes it hard to explore any of the proposals that people make and gives their presentation a superficial gloss that heightens rather than reduces the anxiety of the viewer since there is little to pick from among the sea of voices. (Potential–and competing –recommendations can basically be broken down into four categories: space exploration, synthetic biology and biological engineering, reduced consumption, and political/economic reform promoting or requiring any of the former.) That there are gestures towards answering the “What do we do?” question makes the film ultimately more useful than An Inconvenient Truth, even if it lacks the focus and depth of Cool It! or Owning The Weather.

Christian responses to the film will no doubt be complicated, though I hope not ultimately compromised, by its unapologetic and insistent evolutionary assumptions. While I think there are elements of evolution that are not incompatible with a faith in the Christian Bible as the word of God, the truth is that the term “evolution,” as it is currently used, is as much a broad philosophical concept and worldview as it is a narrow, biological term. The film’s insistence that that causes for our precarious situation must be explained through evolutionary rhetoric (our primate brains not evolving past a “fight or flight” mechanism) is, I think, ultimately a rhetoric trap. Aside from potentially alienating Christian viewers (who could just as easily use their own language for describing the importance of stewardship and the causes and effects of gluttony),  the evolutionary framework risks promoting the notion that our behavior is ultimately biologically determined, thus making the whole argument pointless. We’ll do what we do because it’s in our genes. If you really believe that, then why are you appealing to me to act differently?

All these quibbles may make it sound like I’m damning Surviving Progress with faint praise, however, and I don’t want to make the excellent the enemy of the good. There is something encouraging about the film’s allusions to the “social brain” and I find glimmers of hope, ironically, in the increasing frequency of such warnings as they evidence that some of our best minds are at work wrestling with problems and using media (such as film) to collaborate.

I found Michael Hudson’s discussion of the ancient custom of jubilee and its importance to the preservation of societies to be prophetic in the fullest sense of the word. It gave me a deeper appreciation for those who can extract from Biblical practices not merely a set of rules to be followed but a set of principles to guide. In the reminder that Americans (and some Europeans) consume resources at an exponentially higher rate than do occupants in other parts of the world I am encouraged that it is still possible for me, as an ordinary citizen, to make meaningful choices consistent with my belief system.

Perhaps hearing the words, “Well done, good and faithful servant” will not be dependent upon whether or not one turned the tide so much as whether one thoughtlessly participated in the rush to acquire more and more that created it.