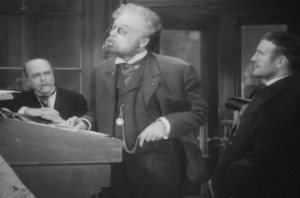 I am working my way through the winners for Best Picture (as awarded by the Academy of Motion Pictures).  Yesterday’s film was The Life of Emile Zola, and I was lightly mocked (and the film much maligned as boring) by my viewing companions.

I will admit that the film has the sort of schmaltzy feel (aided by the over the top score) of its era.  It was released in 1937, so some of the acting is what we’d describe as overwrought today.  The inital life of Zola is less interesting than his transformation at midlife to successful writer from starving artist.  The film really hits stride when Zola (played by Paul Muni) finds himself confronted with the choice between righting an injustice or resting in his comfortable status as a man of letters.

He chooses to fight injustice, championing a man unjustly convicted of treason (Captain Alfred Dreyfus played admirably by Joseph Schildkraut).  He does so at great cost to himself, his reputation and his wife.  Which makes the story that much more inspiring to me.

A few quotes from the movie may illuminate why I fell in love with this old sleeper:

“We of France, who gave the world liberty, shall we not now give it justice?”

“What matters the individual if the idea survives?”

“The world must be conquered, but not by force of arms.  But by ideas that liberate–then we can build it anew for the humble and the wretched.”

“He had the simplicity of a great soul.”

“He was a moment of the conscience of man.”

That last one really gets me.  And the first one, too.  We’ve spent a lot of time, us Americans, telling the world in recent years how democracy can offer freedom, wealth and a way out of tyranny.  Where we’ve dropped the ball (with Abu Ghraib, Guantanamo, for example) is in the realm of justice.  Justice cannot be found in courtrooms where the accused have been silenced or tortured, where they cannot have access to evidence given against them, where their advocates are unable to obtain detailed information about such evidence.

The Life of Emile Zola reminded me of that truth…and it plays, especially in the trial scene, perilously close to home.

This post originally appeared at Laura’s Blog and is reprinted here with the author’s permission.