Someone I loved died of cancer a few years ago. I spent a good portion of Hope Springs Eternal wondering what she would have thought about the film and trying to name the ambivalent, irritated, feelings that it was provoking in me. 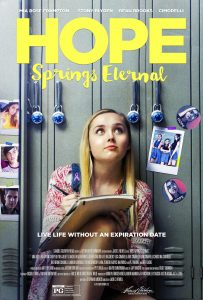 Give me enough time, and I could probably talk myself into claiming it was offense at the film’s superficiality when dealing with such heavy material, but that would be more accurate than true. Yes, the film’s premise–that a teen girl with cancer is disappointed at the loss of attention and special treatment when she goes into remission–is both less and more daring than the script knows what to do with. And yes, the plot unfolds in a predictably disappointing linear fashion, with Hope’s friends and loved ones summarizing each scene’s life-lesson in on-the-nose dialogue. But…I know what offense feels like, and this ain’t it. There’s actually something winsome about the film’s ambition. In an age in which it could have been so easy to phone in some crappy cable-channel filler, anything that portrays teens in general (and girls specifically) as having at least two and a half dimensions is halfway there.

First, the central complaint. Too much of the pain and suffering is elided from the presentation of Hope’s cancer. We see her go to a chemo session, dropping off free pastries at the nurse’s station and calling her pain an “8” (on a scale of 1-10), but the fear of death, however proximate, is a very different beast from living with constant pain and fear. Hope explains her disappointment at the remission diagnosis by saying, “I like things the way they are.” Well, who wouldn’t? The boy she met on a Make-A-Wish trip to Australia leaves his country to be with her. The mean girls buy her a manicure. Teachers let her homework slide. She has a built-in excuse for any self-centered or narcissistic impulse a teen might have. 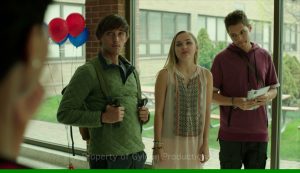 After the plot wraps and we get a music video, Hope comes back for a meta-commentary on the movie, saying she made YouTube videos because they were about “making fun of the things that scare us.” But cancer, as it is presented here, doesn’t scare us. The horrible nature of cancer is taken as a given rather than depicted.

And yet there is an emotionally authentic portrait of adolescence here that makes one want to forgive the movie its faults. Much like in Love, Simon, there is something important and necessary about the way the film allows you to be critical of an individual member of a victim class, thereby actually treating the class with more respect than do those films that can’t see its characters as individuals rather than only representatives.

When Hope’s secret gets out, she looks at herself in the mirror and says, “You’re pathetic.” That line doesn’t quite land with the same emotional impact that it might have had any of Hope’s lies done lasting damage, but I wouldn’t be surprised if it didn’t do more good for its target audience than it does for 52-year-old, male movie critics. Ultimately, the film’s real message is the thing that scares us the most is not cancer but rejection. Perhaps that’s a facile message, but there is at least a seed of truth in it. And I suspect there are at least a few seventeen-year-old girls out there somewhere who need nothing more at this moment in their lives than permission to acknowledge that their emotional pain is every bit as real and terrifying for them as is the emperor of all maladies is for the rest of us.

Hope Springs Eternal premieres simultaneously in some theatrical markets and on streaming platforms beginning August 10. I can’t imagine anyone going to go see it when they get to the theater and The Meg is sold out, but I kinda hope it finds a place somewhere in the long tail.