I’m of two minds when it comes to writer-director Mélanie Laurent’s new film Breathe. While I find it a deft and intoxicating study of obsession and identity vis-a-vis a strangely-brewed friendship between two French high school girls, its languorously paranoid tone can tend toward the overwrought. It’s a tenor that renders the film inert on occasion and, at worst, redundant, so much so that when its jarring finale drops, it reads more like a crutch than conclusion. (I won’t spoil the ending, but it’s certainly divisive.)

But maybe it’s this tension at which Laurent is aiming: Friendships are often an incalculable mix of ecstasy and disillusionment, brutality and tenderness–especially those formed in our youth.

We are first introduced to Charlie as a witness to her parents’ marital strife. A mundane morning of a polite tete-a-tete concerning eggs and a deliberation on whether she will walk or ride to school is laced by her mother’s and father’s crumbling relationship: accusations of infidelity, domineering denial, and quieted, broken sobs. After that initial scene, the film tracks a day in Charlie’s life. She’s melancholy and listless. A montage of everyday teenage occurrence feels weighty underneath the eyes of the brilliant Joséphine Japy. She emanates a beautiful, composed sense of sadness, the kind that preys upon the young who possess neither the experience nor wisdom to appropriate their personal turmoil.

Charlie’s life is soon reinvigorated by the arrival of a new student, Sarah. She is vivacious and playful from the moment she is introduced. Lou de Laâge, who plays her, is like a young Celine from Richard Linklater’s Before trilogy: self-assuredly feminine and radiating life as if she drew it directly from the sun. To Charlie and her friends, she tells stories of sexual escapade and of her mother who works in war-torn Nigeria. She is experienced, a worldly woman of only 18. Charlie (and the camera) immediately finds herself in the pull of Sarah’s hypnotic charm. 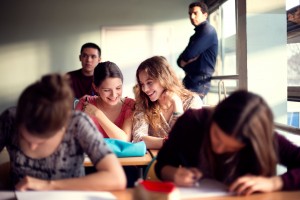 Like Todd Haynes’ Carol–another 2015 film about the burgeoning relationship between two women–Breathe implies an an economy of desire through long-held glances, gestures and grazes between bodies, and a luscious, gorgeously-lit visual palette. Even amidst the crowds of a public high school, Laurent and cinematographer Arnaud Potier are able to thread the sightlines of longing between Charlie and Sarah. The camera doesn’t have to hunt to find their faces among the crowd; they naturally swell with emotion and desperation.

Using the frame as a space primed for close relationship, another montage, as if a direct response to the humdrum one before, binds the two quickly together. They go from just meeting to BFFs in a breath. Yet it’s the constant unsteadiness of the handheld camerawork that clues us into a different rhythm taking place. Almost every shot is filmed with a woozy, circling docu-like sensibility. It makes the story feel very immediate yet also unsettling. Eventually that rhythm takes on its own life, as if Laurent and crew are drawing out another story or layer with the lens–one that even the two girls are unaware of.

What Charlie and Sarah (and most anyone else diving headfirst into a thrilling friendship) don’t grasp is the psychology of their relationship. They lack any awareness as to the danger at hand. Their friendship is similar to many a teenager’s: In a place of loneliness, depression, or boredom, we often seek those who will bring the ecstasy back to life. In Breathe that kind of friendship plays as psychosexual, desperate, and dangerous as equally as it does freeing.

The elusive first half begins its descent into something more cogent when the girls go with Charlie’s mother on a weekend retreat. It is here their relationship begins its strange disintegration. What has been a fun jaunt turns when the two share a half-drunken kiss late one night. Play-acting a scenario where Sarah is a man they saw at a party that same night, Charlie plays her pursuer. Speaking English (for the first and only time in the film), Charlie says she’s in love to which Sarah responds that it’s impossible; Charlie then proclaims she wants to kiss her. Sarah says she’s not ready, kisses then slaps Charlie, and playfully falls back onto the bed to sleep. But Charlie is stunned. The lines are blurred between actor and friend. Was it real or not? Or both? How much truth was in Sarah’s actions?

Here the narrative and their friendship take a turn. When they return to school, Sarah begins to pull away from Charlie, even to the point of mean-girling her. All the while, Charlie’s obsession with Sarah grows deeper. She lusts after the intimacy she had known. Sarah has turned on Charlie like grade-school friendships/romances do, yet Charlie remains in love. That strange psychology of desperation, glee, and belonging had found a home, and it left as quickly as it had arrived.

Breathe ultimately seems to say something about the nature of friendship, something like: Intimacy is a dangerous and volatile space to navigate because it’s where we are most vulnerable. When the façade diminishes, the real person is exposed. Some, like Sarah, hide from that behind a boisterous mask, like a social magician. Others like Charlie, crave it because it is freedom to know someone so deeply. And while Laurent effectively teases out Charlie’s feelings in a way that reveals the danger and obsessiveness latent within all close friendships, the choice for a more sinister ending abruptly hits the Hitchcockian a tad too hard.

There’s much to like–the brilliant lead performances, Laurent’s sure-handed direction, the insight into the dangers of friendship–yet its central conceit overstays its welcome, turning the whole into a redundant and over-calculated affair. Breathe plumbs the dark yet doesn’t return any the wiser, like many a youthful, impassioned yet now dead friendship.