Noble (★★) is immunized from too much criticism by the achievements of its subject.

When someone creates a foundation dedicated to the purpose of “alleviating child poverty in Vietnam & Mongolia and giving all children the right to a happy and safe childhood,” she deserves, at the very least, respect. The problem is that Noble is so respectful of Christina Noble that its respect veers into awe. That’s not an emotion productive of great works of art. 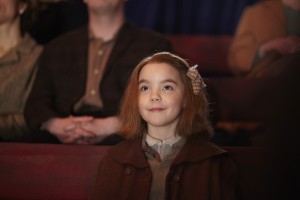 Did I want a biopic that was critical of its heroine? Of course not. But I wanted one where she was presented as a fully realized human being. The Christina Noble represented in this film is a walking sermon object lesson. Expository dialogue–the practice of having a character verbally explain or interpret the the meaning of their own movie for the benefit of the audience–is always patronizing: in Christian movies, it can feel especially so.

Even this practice isn’t what hurts Noble the most. Rather, it’s that when the film does explain itself, it hedges its bets. “Now we both know what it’s like to lose a son,” Christina says to God in prayer after her child is taken from her and given to “a good Catholic home.”  This dialogue is somewhat on the nose, but, okay, the theme of parental loss is well worth exploring. And if that loss is what fueled Christina’s sense of mission, then it’s worth exploring.But almost as though it senses the intended Christian audience shifting in its seat, the film has Christina almost immediately explain herself: “I’m not being blasphemous. I’m not comparing myself to you.”

She sort of is…but that’s not even my complaint. Rather than trust the audience to understand that Christians are complex, emotional beings who wrestle with God, the film presents this scene (and many others) as a predigested, preexposited summary of itself. With the film working so hard to ensure the audience doesn’t have to work at all, is it any surprise that what we get is a respectful but rarely impactful hagiography? 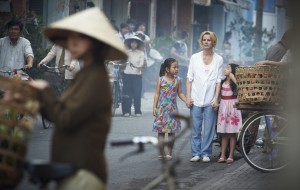 Noble also suffers from a structural problem of having too much material. We get Christiana’s childhood where she soothes a drunken father by singing “Danny Boy.” We get a Philomena knock off of a genuinely devout Irish Catholic betrayed by institutional religion. Young Christina’s prayer for her father is met with, “That’s enough nonsense. God can’t cure everyone.” Then we get the Law & Order: SVU arc with Christina in the lobby of a hotel trying desperately to get authorities to intervene when she sees a predator take a child back to his room.

None of these vignettes are terribly executed, but when you have three different actresses playing your lead character in a 100 minute movie, it inevitably starts to feel like a book report on the character rather than a unified narrative.

There is one way that Noble stands out from most Christian films. The seriousness of its subject matter also immunizes it somewhat from any sense of glibness or smugness. Christina does a lot of good work, but the film never succumbs to the Christian movie addiction of needing to be a “feel-good” story. Because of that, paradoxically, we do feel better watching it than we do at some Christian movies that will only show evil as a prelude to showing Christians conquering it. While Noble doesn’t present the world as a place that is easily cured of its sinful ways, nor Christians as above the fray, it does suggest there is a way of working for good and even bringing light into some fairly dark places.