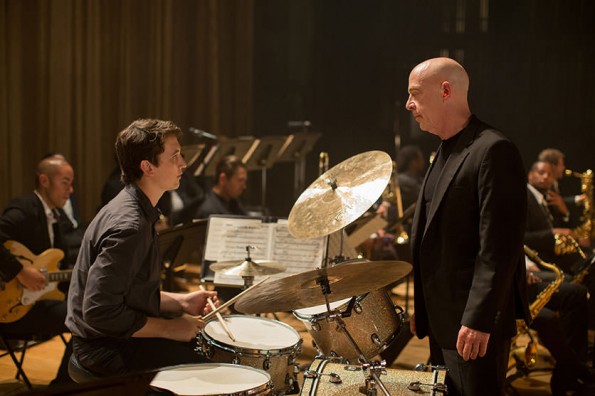 There are a lot of lies in play in Whiplash (★★★★), Damien Chazelle’s Oscar-nominated water-cooler fable about a music conservatory drummer (Miles Teller) and the sadistic instructor (J. K. Simmons) he is drawn to like a junkie jonesing for his next fix.

One mark of the film’s greatness: even after a second viewing, I am still not sure how many of those lies the film itself–or any of its characters–believe.

Teller plays Andrew, the precocious drummer with just the right mix of aspiration and neediness to be ripe to fall hard for the manipulative machinations of someone, anyone who holds out the promise (no matter how small) of potential greatness.

That someone is Fletcher (Simmons, in a career-defining performance), one of those legendary teachers who only exist in the movies. He prowls the halls of the conservatory, vampire-like, at all hours, instilling hope and dread in students and colleagues alike. Fletcher is at the peak of his profession, and his own accomplishments as a conductor apparently bring the conservatory enough glory that he is given free reign to extend practices to all hours, cherry-pick students from others’ classes, break equipment, strike students, and use the sorts of personal insults that might make a drill instructor blush.

A lot of ink has been spilled to this point about whether or not the film’s portrayal of the conservatory life is at all credible. I imagine not; it’s hard to imagine Flectcher not having been fired long ago. Yet such criticisms disinterest me. I’m not sure the film is going for social realism. It’s at heart a fable, and while its surface details sometimes smell false, the truths it lays bare about the human soul strike me as spot-on.

It’s important to note, for example, that Andrew is very-much a participant in his destructive, downward spiral. Whiplash is not so much a film about a bully with a scorched-human-earth policy towards uncovering greatness as it is about an angry young man who continually chooses abuse over love and the potential for greatness over the potential for happiness. The core of the film illustrates a horrific, painful, and dysfunctional teacher-student relationship–one that is the antithesis of everything I’ve learned about teaching in a career of developing students in the liberal arts. But that relationship is, in the final analysis, a symbiotic one. Much like the Navy Seals in American Sniper or G. I. Jane, the musicians who subject themselves to the abuses of Fletcher’s classroom do so in the conviction that if they can make it there, they’ll make it anywhere. And they know that even if they do nothing else in their entire lives, their refusal to quit such intense initiations will be at least one taste of greatness that ordinary mortals will never get to savor.

Maybe they are right. I’ve never really believed that the ends justify the means, and I’ve certainly never found that fear and intimidation are conducive to the best learning environments. They are good motivators, though. Plus, I don’t recall Fletcher ever even claiming that he was teaching the students anything; he says his job is to push them. What’s appealing about that? Well, not everyone has the talent to be exceptional, so there is something about reducing success to enduring (regardless of what one is enduring) that will make people take a lot more abuse than they ever would if that abuse were supposed to produce something other than a winner.

Despite my repugnance at Andrew for making an exchange of self-respect and dignity for opportunity, for making a wager of his sanity and felicity on the sort of long-shot that would make the hard-core addict in The Gambler take pause, I confess I found the film incredibly moving and our protagonist remarkably sympathetic. The key to film, for me, takes place away from the stage or even the rehearsal hall. It happens around a dinner table where Andrew, like so many artists, is demeaned and dismissed for having a skill and a passion that doesn’t happen to coincide with his culture’s current obsessions: sports, wealth, or prestige. If Andrew longs for Fletcher’s smile of approval, it’s not because of the extrinsic rewards the conductor can clear a pathway towards. It is because Fletcher may be the only one whose obsession rivals his own, the only one demanding enough to justify the sacrifices Andrew longs to make.

I’m a Christian film-critic (as well as a teacher), so, yes, I tend to see spiritual allegories where others may see only social ones. What’s spot-on about Whiplash is the way it recognizes and taps into the deep-seated longing for eternal significance, as well as the desperation and futility of its pursuit in a universe devoid of a loving God, where such significance can only be achieved through accomplishment. Fletcher’s classroom is essentially a miniature Darwinian-Hegelian universe, with competition fueling evolving talent, which finds its antithesis in greater challenges, world-without-end, amen.

That’s why I find the end of Whiplash so depressingly perfect. Like another of my favorite films, Rounders, it participates in the most tired conventions of its genre–that of a final competition to underscore its protagonist’s victory. But like the Matt Damon poker film, it perhaps leaves astute viewers more drained than comforted, as we know the underlying void that is pushing its protagonist to such exhilarating heights can never be satisfied. All human [accomplishment] is vanity, and a pursuit after the wind.

There is another way of reading the film’s finale, though. There can be moments of transcendent joy that few experience–that few, in fact, can recognize. In the culmination of Whiplash the audience fades away. To a certain extent the rest of the band fades away. Fletcher doesn’t. He and Andrew share what my former drama instructor used to call a “moment.” Life, for some, is made up of such moments. The vast spaces in between them are just existing, and the person who trades hours, nay years of the latter for a few more of the former may be an idiot…but I’m not sure, in the end, if he’s not a holy idiot. I’m not sure he doesn’t catch a rare glimpse of something–God willing something that’s awaiting us in abundance in the next world–that few of us grinders ever get close enough to recognize.