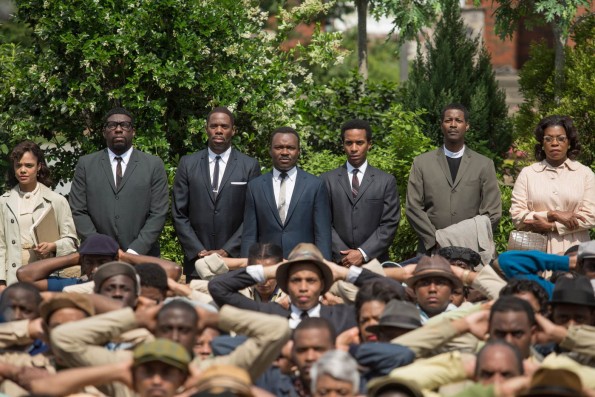 Selma is one of the most anticipated films of the holiday season. Having received four Golden Globe nominations, including nods for Best Drama and Best Director, and currently sitting at 100% “Fresh” at Rotten Tomatoes, it is emerging as an Oscar contender.

I was fortunate enough to visit the set during this summer’s shoot, witnessing the filming of King’s speech on the Montgomery steps. I was also part of a panel of reporters from the evangelical press that participated in a round table interview with co-star Wendell Pierce. The actor, best known for his roles in The Wire and Treme, plays Hosea Williams in Selma.  He spoke passionately about his experience making the film as well as that of growing up Roman Catholic in a segregated city–and how racism challenged the development of his own faith. Below are some excerpts from his comments:

On the “Christian” nature of Martin Luther King, Jr.’s advocacy:

All of these people were leaders in their own right, and it wasn’t a coincidence that they were reverends. [It] was a Christian movement, and I think the thing that was amazing about it was not only showing the hypocrisy of Americans, challenging them, but challenging Christians also. Dr. King […] really challenged people’s spirit, heart, and soul—what they believed in. How could you be Christian and treat others that way? I think that was the combination of the two: the political strategy of understanding what advocacy could do, understanding what God could do in non-violence, but [also] understanding that they were men and women of faith trying to appeal to the hearts of other men and women of faith.

What did he ask those who participated in the Selma march?:

When I asked John Lewis, “In that moment, when you crossed the bridge, what did Hosea say?” He said, “He turned to me and said, ‘John, they’re about to tear gas us.’” For me, realizing that this man, this reverend had fought in World War II—African-American soldiers, the double V campaign, you know about that? Victory abroad and victory at home. He had fought one battle. There was victory abroad, and now he was fighting a second. Victory at home. He had the waddle of a walk because he was injured in a tank in World War II. And [….] when John said that to me, I remembered that my father, who also fought in World War II, that was a part of the training. [They] basically sent you into a gassed house, filled with gas, and you had to take the gas mask off to see how it would impact [you]. So he knew, because he had experienced it, what was about to happen.

I struggle with my faith. I…[long pause]…I grew up Catholic in the South. I’m still Catholic. I don’t go to the church near my neighborhood now because when we first got there, the separate but equal neighborhood in New Orleans [….]the parish happened to be on the white side. And when my parents first got there, they sat in their favorite pew, right side, fifth row, anywhere in the world the Pierce family’s there. And they tapped on their should, they said, “Excuse me, the Negro pews are in the back.” My grandmother’s Bible study was segregated. The white kids would go first, and then the black kids would go second. And the white kids would go to the choir loft and pee on them. The reverend would just say, “Stop, stop, stop, stop.” That’s it. So now, you grew up in a church like that, the first thing you ask as a kid is, “Momma, why do we go to church?” She said, “Baby, we’re trying to have a relationship with God. Always separate that which is divine and that which is man-made.” [….] In religion, I’m constantly trying to make sure—I want to get to what God is trying to say to me. And so…understand that man is…fallible. So that allowed me to stay in the church, you know, and understand that, okay, all the things I hate about the church doesn’t have to do with the divine.

What is the importance of the film now that the generation that lived through these events is passing away?

I think [films like this are] profoundly important because…there are those that don’t have our best interest at heart. Who love revisionist history. And to…belittle, to lessen the impact that Martin Luther King had on this country and this world. I told people, as we make this film and celebrate Dr. King and meet all these men and women who actually stood by his side, that developed this movement with him, like the courageous eight in Selma, like Reverend Reese, and C.T. Vivian…those who were on the other side are still alive, too. There are some men and women that…we forget that. We forget that there are those who are in agreement with Bull Conoor and Clark, and to this day think that Martin Luther King was a communist, was a plant, who want to discredit him. That he doesn’t deserve the accolades that he’s getting, because he actually changed a system that they felt was fair enough. Men who wrote that constitution did not consider me a human being. And there are some that don’t have that enlightenment, that feel as though—when they say “America,” that doesn’t include me. So as we look at these elderly statesmen and women, remember that there are still many men and women who cannot grasp the idea that we deserve—of everybody having those rights. Martin Luther King is emblematic of that change that they cannot accept. And it’s important that we not allow those folks to change who he was [with] revisionist history that he didn’t make the impact that he did on this country and change one of the great American heroes. We should never allow anyone to demean him to a point where he is ineffectual.

Selma has a limited release on December 25th and will expand to theaters everywhere on January 9, 2015.